COULD VEGETARIANS SAVE THE WORLD'S FORESTS? 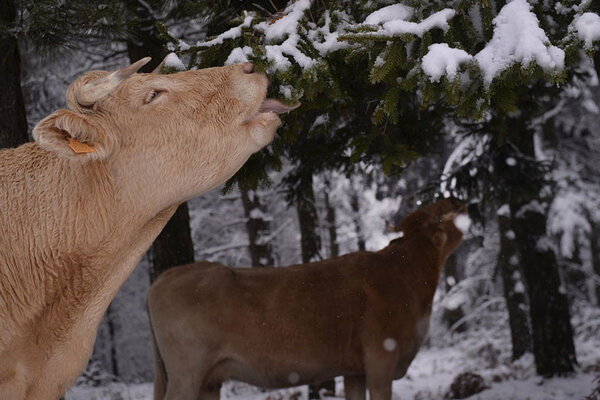 A growing global population means forests are under threat from expanding farms. But a small change in our diets could save many trees...

There are more than 7 billion people living on Earth and that number is growing. Estimates suggest the global population will hit at least 9 billion before 2050. But how do we feed such a rapidly swelling population with just one planet?

It has been suggested that more forested land must be converted for agricultural use, a process that is already devastating many forest-dwelling species and releasing a significant amount of carbon dioxide into the atmosphere. But two new studies suggest that increased deforestation might not have to be on the table.

The solution may be as simple as adjusting what we eat.

But hamburger lovers might not like this plan. Cutting down on meat consumption, particularly beef, might provide a sustainable way to feed the world without destroying our planet, according to a study published Tuesday in the journal Nature Communications and a World Resources Institute report published Wednesday.

About 40 percent of the world's land is already used for agriculture. But these aren't fields of wheat, lettuce, and tomatoes. Most of that land is used to grow grains to feed livestock or support the livestock themselves. And cows are the worst offenders, requiring about two-thirds of the world's agricultural land.

"A lot of the debate in the past on food security was focused on supply-side solutions, increasing yield," Eric Lambin, a senior fellow at the Stanford Woods Institute for the Environment who was not part of either paper, tells The Christian Science Monitor in an interview.

But food production would have to increase by 70 percent by 2050 in order to feed everyone on the planet without cutting down more forests, says Tim Searchinger, a senior fellow at the World Resources Institute and a researcher at Princeton University. That would mean crop yields would have to improve faster than they ever have historically, including during the Green Revolution.

Looking at changing food consumption isn't a new idea, Dr. Lambin says. But "these studies confirm it in a very formal, rigorous way."

The Nature Communications paper approaches the issue through modeling. The research team plugged in hundreds of different possible future crop yields, and how much land would be needed for such production, in order to see what was feasible to feed the world in 2050.

"There is actually not a biophysical necessity to deforest," study lead author Karl-Heinz Erb, a land use and global change researcher at the Institute of Social Ecology at Alpen-Adria University in Vienna, tells the Monitor. Improved production helps, but "we found that diet was the most important single factor influencing this global option space," he says.

The more diets move away from meat consumption, the less land would need to be converted for agricultural use, says Dr. Erb. In fact, the study reveals that all scenarios in which a vegan diet (consuming no animal products) is adopted require no new deforestation. A vegetarian diet helps, too, but isn't perfect. Of the scenarios tested, the team found that 94 percent required no new forest conversion.

Should we all become vegetarians?

Don't toss out the meat freezer just yet, Mr. Searchinger says. It's like driving your car, he explains. Your car emits a lot of greenhouse gases, but that doesn't mean you have to start walking everywhere. Instead, you should choose where you drive and choose to drive efficiently, perhaps by carpooling or buying a more fuel-efficient car.

You don't have to swear off steak, Searchinger says. Instead, "think of beef as a kind of environmental luxury."

For example, if Americans swap poultry or pork for one third of their beef consumption, their diet-related land use would go down by almost 15 percent, according to the World Resources Institute report.

Not everyone in the world should cut down on their meat consumption, Searchinger says. "It's the wealthier people who eat far more beef and dairy than they need that should need to make the cuts."

The World Resources Institute suggests that if Americans cut back their consumption of animal products in half, their diet-related land use would also be cut in half. Focusing just on beef would have a significant impact. Reducing American beef consumption to the global average – which would be about a 70 percent reduction – would cut that diet-related land use by about a third.

"Every move from people who today have a very rich diet in meat, every move in the direction of less meat in the diet is something good for the environment," Erb says.

A production and consumption combination

Ultimately, a sustainable solution will come down to a combination of making food production more efficient and shifting diets toward a more sustainable balance, Searchinger says.

"It is very important that we improve the way we produce food," he says. "Improving beef production is part of that."

One option is to raise grass-fed beef, as that would eliminate the step of growing feed for the animals. Instead, they would survive off fields of grass. Although that could help improve the industry's impact on the environment, Searchinger says, "most of the beef in the world is exclusively or almost exclusively grass fed, and the source of additional beef consumption in these locations is cutting down forests and woody savannas."

And thus deforestation would still be an issue.

Why save the trees?

Forests house an immense amount of biodiversity, but they're not only a home for animals. About 296 gigatons of carbon is stored in forests globally.

Forests act somewhat like lungs. When trees grow, they lock carbon dioxide away in their leaves, branches, trunks and roots. But when they die, that carbon dioxide is released into the atmosphere.

Deforestation accelerates that process, and the world is losing its natural carbon sink. Over the past quarter century, some 319 million acres of forest has been lost globally. And much of that loss is thanks to clearcutting to expand agricultural lands to feed people.

But these new studies suggest that "the food security argument for deforestation is not valid," Erb says.