COUNTRIES RELY ON CARROT, NOT STICK, TO KEEP TRUMP IN PARIS AGREEMENT...

EU, Saudi chiefs dismiss the prospect of trade penalties to deter a US exit from the UN climate pact, focusing on the benefits of participation...

Across the UN climate talks in Marrakech, countries are emphasising the benefits to the US of staying in the Paris Agreement.

Less clear is how parties to the landmark climate pact might penalise Washington if President-elect Donald Trump follows through on his threat to withdraw.

Former French president Nicholas Sarkozy, who is running for the office again, on Sunday proposed putting a carbon tax on US imports to the EU.

Sarkozy has repeatedly championed a carbon border tax adjustment to make sure EU industries are competitive with those in less stringently regulated markets – previously with a focus on China.

Now China is bringing in a national carbon market, while Trump is promising to dismantle Barack Obama’s climate policies. A source in Trump’s transition team told Reuters the incoming administration was looking at ways to pull out of the Paris deal as soon as possible.

Analysis: One week to save UN climate change talks from Trump

In a press briefing at the UN negotiations, however, EU climate chief Miguel Arias Canete steadfastly refused to countenance a US exit from the carbon-cutting pact.

“Donald Trump can’t ignore the tremendous job creation potential of the clean energy sector,” he said. “At the moment, we are sending the US the message it is in the interests of the US to deliver [on its climate commitment]… I don’t want to put myself in worst case scenarios that have not yet presented themselves.”

The “high ambition coalition” of developed and climate-vulnerable countries formed in Paris – previously including the US – is due to meet on Monday evening and discuss how to maintain momentum, he added.

Saudi energy minister Khalid Al-Falih too clung to the narrative that Trump would change his mind once he took office: “I don’t believe there will be trade retaliation on climate. I believe that wisdom will prevail.”

Trump is already heading for a trade dispute with China, unrelated to climate policy, having accused the country of currency manipulation and mooted tariffs of 45%. State-controlled newspaper Global Times warned in an editorial China would boycott iPhones and Boeings in retaliation. 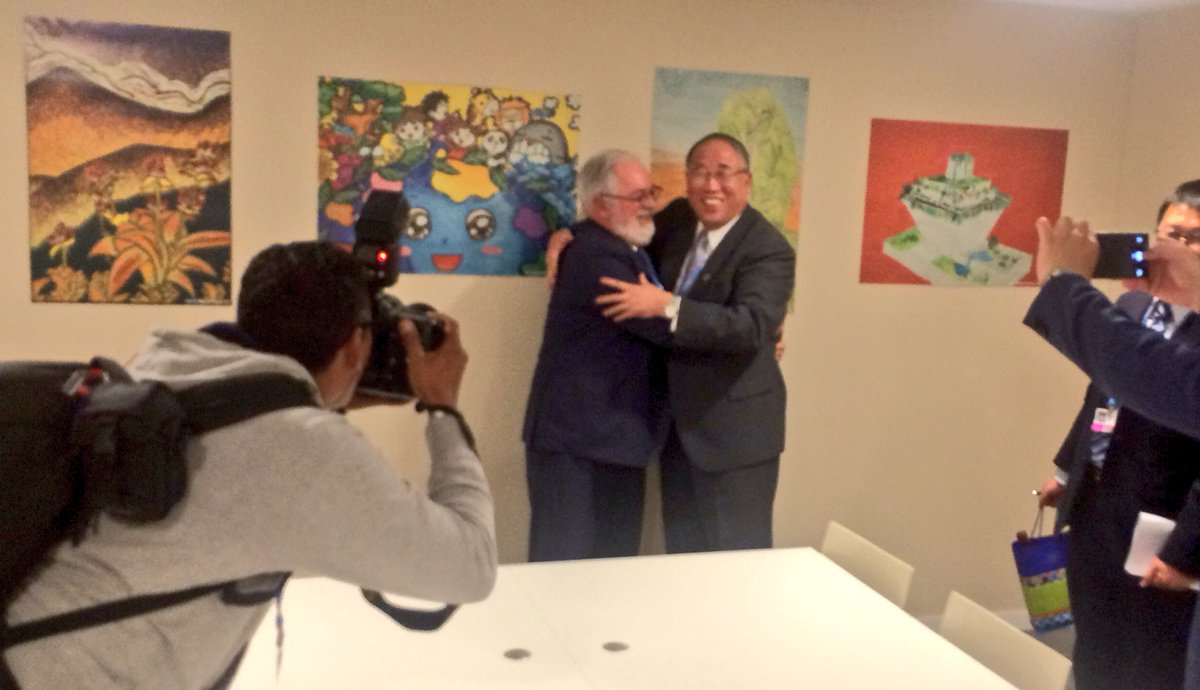 EU-China climate and clean energy leadership now more important than ever. We agreed to boost our cooperation, announcements soon. #COP22

For all the relentlessly positive messaging, Jake Schmidt at the Natural Resources Defense Council told Climate Home US defection would bring consequences.

“I am not sure they [the Trump team] have thought about the ramifications of showing the US word is no longer good,” he said. “If it becomes clear that the US isn’t good on its word, that will have ripple effects on all the other agreements we have entered into.”

A carbon border tax was a potential lever, he added. “I suspect that if there is a clear sense from the world’s largest economy that they are backing away from responsible actions on climate change, countries will respond with appropriate measures.”

By Megan Darby in Marrakech