DÉJÀ VU: AS WITH TOBACCO, THE CLIMATE WARS ARE GOING TO COURT... 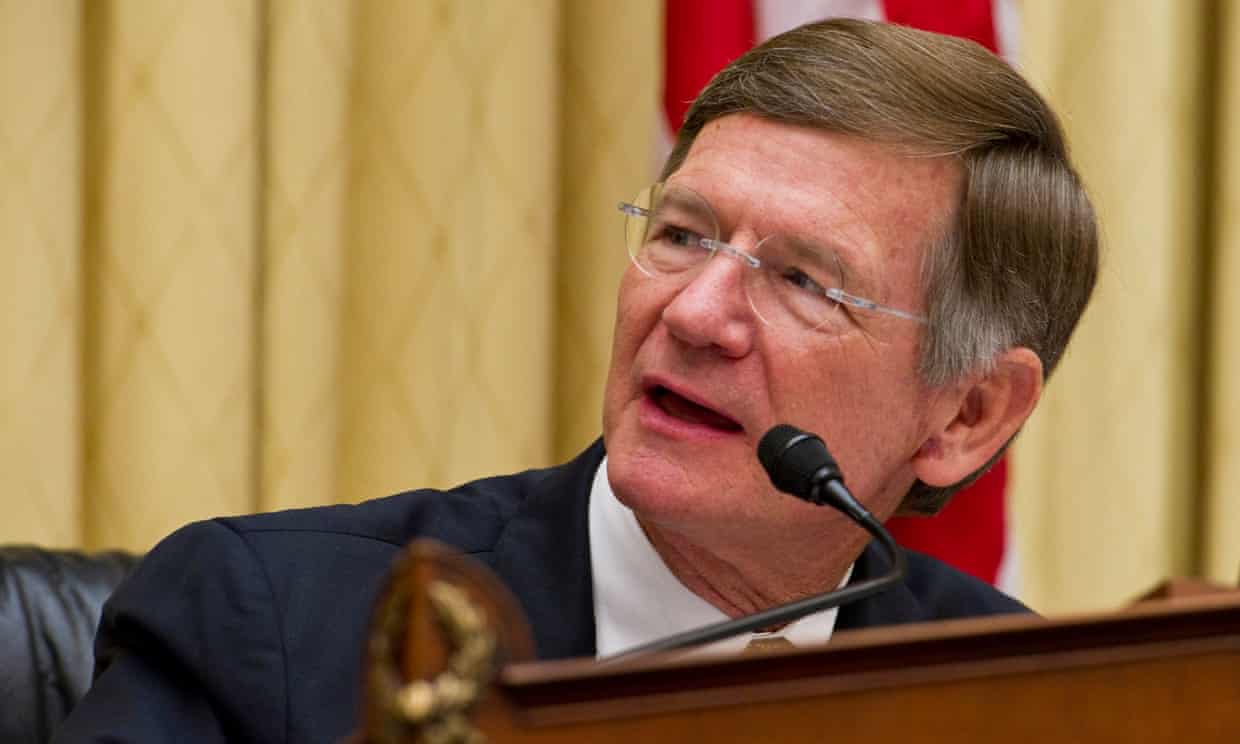 House Science Committe Chairman Lamar Smith (R-TX) is coming to the defense of fossil fuel companies that are accused of deceiving the public on climate change to maximize their own profits. Photograph: Scott J. Ferrell/Congressional Quarterly/Getty Images

Investigative journalism has uncovered a “web of denial” in which polluting industries pay “independent” groups to disseminate misinformation to the public and policymakers. The same groups and tactics were employed first by the tobacco industry, then fossil fuel companies. Big Tobacco has been to court and lost; now it’s Big Oil’s turn. Political leaders are choosing sides in this war.

Research by Inside Climate News revealed that Exxon did top notch climate science research in the late 1970s and early 1980s, which revealed the dangers its products posed via climate change. Soon thereafter, Exxon launched misinformation campaigns by funding “think tanks” and front groups to manufacture doubt about climate science and the expert consensus on human-caused global warming. 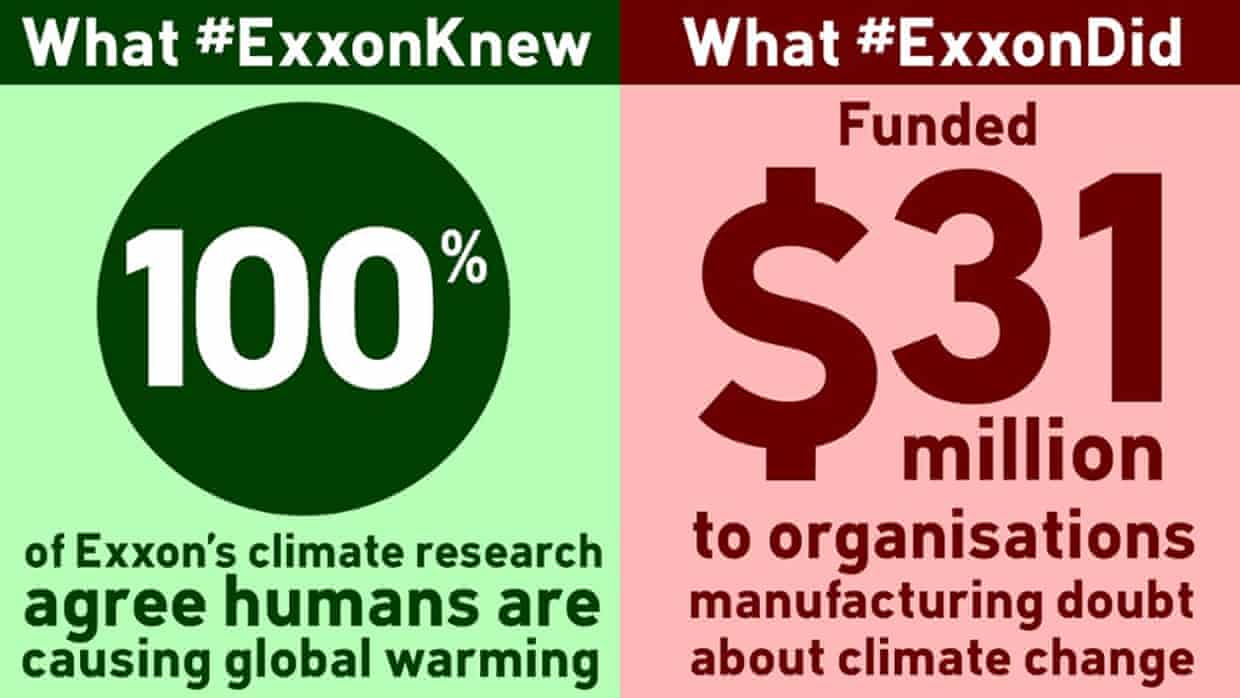 What #ExxonKnew vs what #ExxonDid. Illustration: John Cook, SkepticalScience.com

Exxon wasn’t alone. Koch Industries, Peabody Energy, and other fossil companies have similarly funneled vast sums of money to these groups. Last week, Senate Democrats, including presidential candidate Bernie Sanders and vice presidential contenders Elizabeth Warren and Al Franken signed a Resolution expressing congressional disapproval of the fossil fuel industry’s misinformation campaign. 19 Senate Democrats also took to the floor of the Senate to speak out against the web of denial, with repeated references to the tobacco/fossil connections.

Senator Elizabeth Warren speaking about the web of denial on the Senate floor.

The climate battle goes to court

The fossil fuel industry has already put forth its best scientific argument in court, and lost. Now 17 state attorneys general, led by New York Attorney General Eric Schneiderman, have formed a coalition to investigate ExxonMobil’s activities. As Schneiderman put it:

The First Amendment, ladies and gentlemen, does not give you the right to commit fraud

The Committee has a responsibility to protect First Amendment rights of companies, academic institutions, scientists, and nonprofit organizations. That is why the Committee is obligated to ask for information from the attorneys general and others.

In this battle of First Amendment claims, Big Oil & Coal use the same argument as Big Tobacco, who lost.

Last century, we saw a similar battle with tobacco. By the 1950s, the tobacco industry knew that its products caused cancer and other diseases. They still marketed their harmful products to children, and soon created pseudo-academic institutes like the Council for Tobacco Research to cast doubt on smoking’s damage. However, the institutes’ connections to the tobacco industry were too obvious; they wanted “independent” voices.

In the 1980s the Koch brothers started creating a vast web of “think tanks” that could simulate credible independence, funded via dark money, often tax-exempt. Big Tobacco eagerly joined, to “quarterback behind the scenes.” They contributed great marketing talent, some later hired by Kochs.

(A) developed a sophisticated and deceitful campaign that funded think tanks and front groups, and paid public relations firms to deny, counter, and obfuscate peer-reviewed science; and

Their tactics have grown more sophisticated, for example using money anonymizers like Donors Trust to ensure their “dark money” becomes even harder to trace.

The tobacco industry lost in court

In 1999, the US Justice Department filed a civil Racketeer Influenced and Corrupt Organizations Act (RICO) lawsuit against the major tobacco companies and their associated industry groups. In 2006, US District Court Judge Gladys Kessler ruled that the tobacco industry’s campaign to “maximize industry profits by preserving and expanding the market for cigarettes through a scheme to deceive the public” about the health hazards of smoking amounted to a racketeering enterprise. She wrote a clear statement, appealed fruitlessly by tobacco companies:

The attorneys general investigating Exxon have a strong case that the fossil fuel industry is similarly guilty of racketeering by deceiving the public in order to maximize profits. Exxon and other fossil fuel companies knew of the dangers of carbon pollution more than three decades ago, and yet funneled tens of millions of dollars to think tanks that disseminate misinformation to try to convince the public and policymakers otherwise.

Sharon Eubanks led the Justice Department trial team, as documented in the book Bad Acts: The Racketeering Case Against the Tobacco Industry and was a key contributor to the report Establishing Accountability for Climate Change Damages. Of the Exxon case, she said:

I think a RICO action is plausible and should be considered

Unsurprisingly, oil & gas is the top industry donor to Lamar Smith. History books will reflect poorly on those who sold out millions of peoples’ health for personal gain or industry profits; nor on those who worked to destabilize the climate on which future generations will rely for the sake of their own political power or ExxonMobil’s record profits.