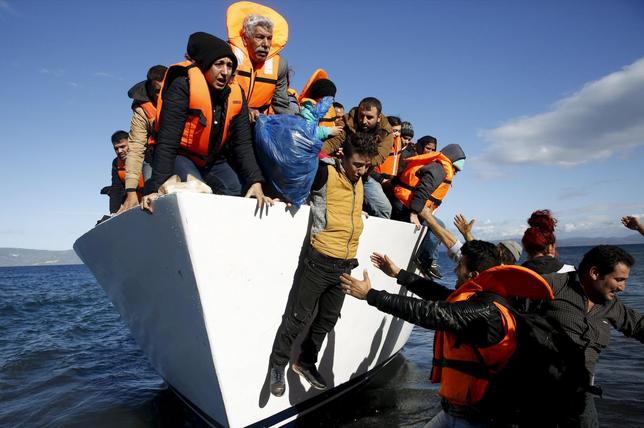 Refugees and migrants jump off a boat as they arrive on the Greek island of Lesbos, in this November 26, 2015 file photo. To match DAVOS-MEETING/RISKS Reuters/Giorgos Moutafis/Files

We live in an increasingly dangerous world, with political, economic and environmental threats piling up, according to experts polled by the World Economic Forum...

Ahead of its annual meeting in Davos next week, the group's 2016 Global Risks report on Thursday ranked the migrant crisis as the biggest single risk in terms of likelihood, while climate change was seen as having the greatest potential impact.

Around 60 million people have been displaced by conflicts from Syria to South Sudan, pushing refugee flows to record levels that are some 50 percent higher than during World War II.

Coupled with attacks such as those on Paris last year and geopolitical fault lines stretching from the Middle East to the South China Sea, the world is today arguably less politically stable than at any time since the end of the Cold War.

Economic fears, particularly for Chinese growth, and increasingly frequent extreme weather events are further red flags, resulting in a greater breadth of risks than at any time in the survey's 11-year history.

"Almost every risk is now up over the last couple of years and it paints an overall environment of unrest," said John Drzik, head of global risk at insurance broker Marsh, who helped compile the report.

"Economic risks have come back reasonably strongly, with China, energy prices and asset bubbles all seen as significant problems in many countries."

Last year, the threat of conflict between states topped the list of risks for the first time, after previous editions mostly highlighted economic threats.

British finance minister George Osborne, one of those heading to the Alpine ski resort set the mood last week, warning that 2016 opened "with a dangerous cocktail of new threats".

The Jan. 20-23 Davos meeting will bring together players from geopolitical hot spots such as the foreign ministers of arch-rivals Iran and Saudi Arabia, as well as the biggest ever U.S. delegation, including Vice President Joe Biden.

North Korea's invitation, however, has been revoked, after it conducted a nuclear test, defying a United Nations ban.

The immediate problems of Middle East tensions, China's turbulent markets and a tumbling oil price are likely to dominate corridor conversations at Davos.

But long-term concerns identified in the report center more on physical and societal trends, especially the impact of climate change and the danger of attendant water and food shortages.

While last month's climate deal in Paris may act as a signal to investors to spend trillions of dollars to replace coal-fired power with solar panels and windmills, it is only a first step.

For businesses, the transition from fossil fuels remains uncertain, especially as political instability increases the risk of disrupted and canceled projects.

One wild card is cyber attack, which business leaders in several developed countries, including the United States, Japan and Germany, rank as a major risk to operations, although it does not make the top threat list overall.

The report analyzed 29 global risks for both likelihood and impact over a 10-year horizon by surveying nearly 750 experts and decision makers.

LONDON | By Ben Hirschler
source: http://www.reuters.com/
To receive the latest breaking news on global warming issues, click here and go to our climate blog. Look to the bottom right of the page for the climate blog Subscribe box to automatically get our RSS news feed and each new story.
To learn what you can do that is effective to help fix global warming caused climate destabilization, click here.
To learn why the term climate destabilization is replacing the terms climate change and global warming, click here.