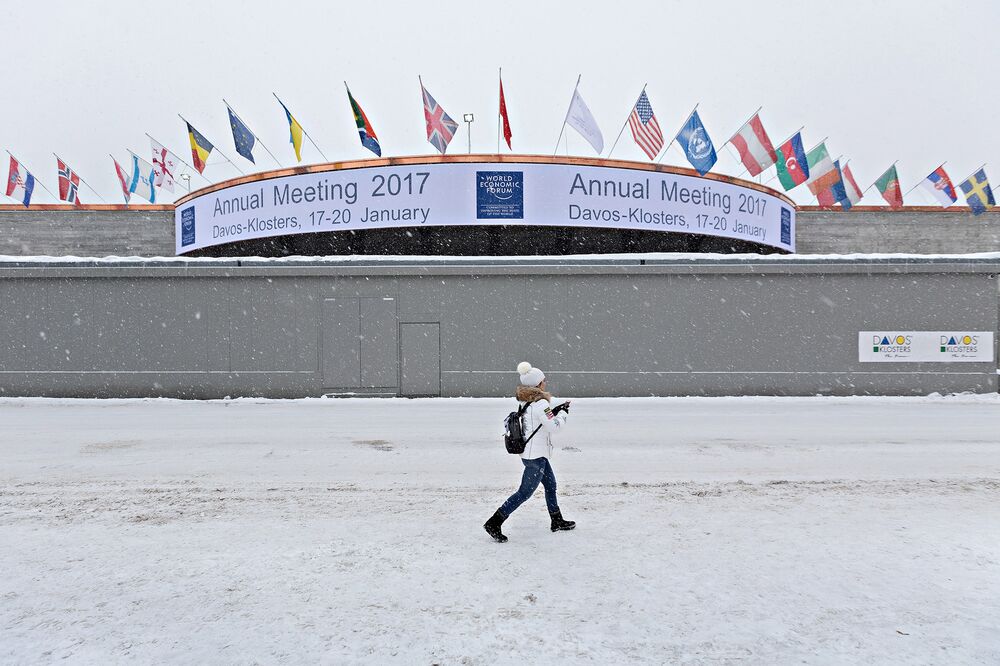 A woman walks past the entrance to the Congress Center, venue for the World Economic Forum (WEF), in Davos on Jan. 13, 2017. Photographer: Michele Limina/Bloomberg

Donald Trump has often ridiculed global warming and promised to withdraw the U.S. from the accord signed in Paris in 2015. Yet despite the shift in political weather in Washington, the captains of business and finance gathered in Davos this week will spend a lot of time talking about climate change -- and how to make money from it...

The World Economic Forum is devoting 15 sessions of its 2017 annual meeting to climate change, and nine more to clean energy -- the most ever on the issues.

It reflects how much is at stake. For global business leaders, it’s not just a question of burnishing their green credentials, but about billions of dollars -- maybe even trillions -- in potential profits and losses. Insurers are starting to price-in more frequent flooding and droughts; energy giants are shaping their business for a world that’s moving away from oil and coal; car makers are putting real money into electric vehicles; banks want to lend money for renewable electricity projects.

"The good thing is that the Paris agreement raised the bar for everyone," said Ben van Beurden, the head of Royal Dutch Shell Plc, Europe’s largest oil group. "Everybody feels the obligation to act."

Achieving the ambitions set out in Paris may require $13.5 trillion of spending through to 2030, according International Energy Agency data that show the scale of the opportunity for business. Only last year, clean energy investment stood at $287.5 billion, data compiled by Bloomberg New Energy Finance indicate. 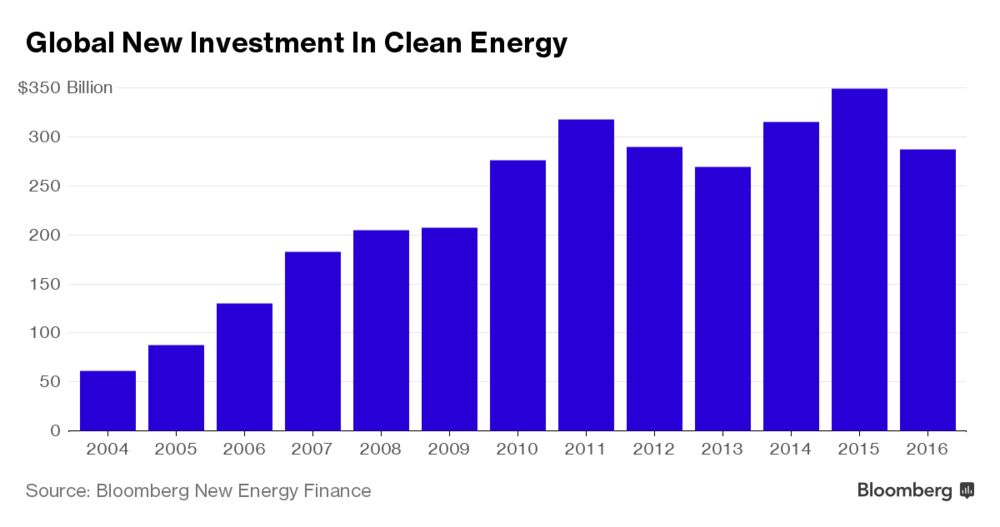 "The scale and scope of the investment flows on renewables shows it’s mainstream," said David Turk, head of climate change at the IEA in Paris and a former senior U.S. climate diplomat.

With money-making opportunities rising, traditional climate change advocates -- Al Gore and Greenpeace Executive Director Jennifer Morgan -- will mingle in panel discussions with executives such as HSBC Holdings Plc Chairman Stuart Gulliver and Patrick Yu, president of Cofco Corp., the largest food company in China. They will discuss the nexus between the fight against global warming and business -- both how to stop climate change and how to profit from it.

"Climate change is material and central for many companies and their boards," said Dominic Waughray, head of public-private partnership at the World Economic Forum. "Climate change is a core part of the growth agenda."

A survey of 750 participants at this year’s meeting shows that extreme weather is considered the biggest global risk, outstripping migrations, natural catastrophe and terrorism: 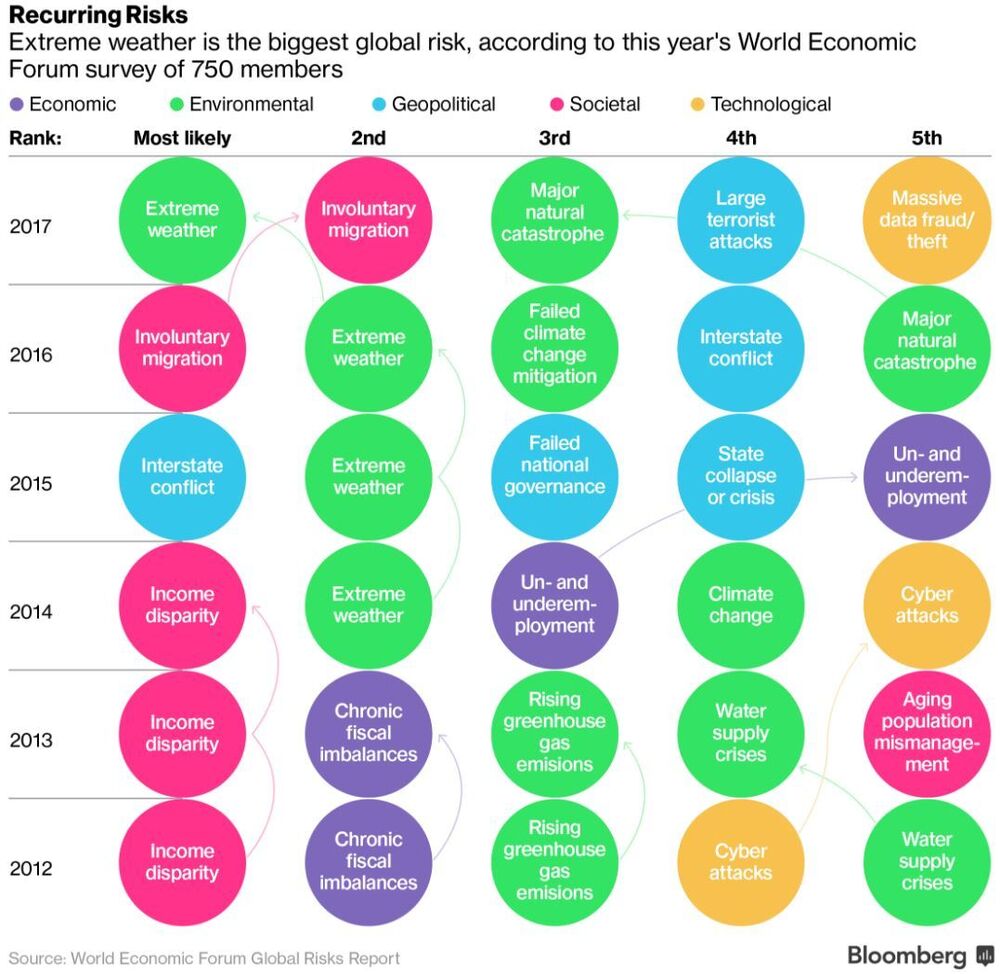 Beyond the official program, a record 60 chief executive officers are expected to gather in a closed-door session to discuss the challenges of climate change, according to a person familiar with the event, who asked not to be named because the meeting isn’t public.

Michael Oppenheimer, a professor at Princeton University who will help to explain the exhibit, said despite the arrival of Trump, the fight against global warming will continue.

"No matter what the U.S. president says, the progress on climate change can have many routes," he said. "The U.S. can harm progress, but will not stop progress.”

In November’s follow-up meeting to Paris, nearly 200 nations, including China and Saudi Arabia, vowed to step up their efforts to fight global warming, facing down concerns the new Trump administration will seek to derail policies aimed at curbing pollution.

China, which for years sought to derail global efforts to tackle climate change, has flipped its role and is now lecturing the U.S. and Europe on the importance of the issue. Xi Jinping will be the first sitting Chinese president to attend Davos, after making green finance a key topic for China’s presidency of the Group of 20 nations last year.

In 2012, Trump claimed climate change was a Chinese hoax designed to damage the U.S. economy. Even though the president-elect has appeared to soften his stance a little, telling the New York Times last year he was open minded about the issue, his policy positions stand in stark contrast to China.

Yet, more than 600 U.S. companies from DuPont Co. to Monsanto Co. have urged Trump to stay in the Paris accord.

"It’s totally clear that companies see the writing on the wall," said Morgan of Greenpeace. "If President-elect Trump doesn’t want to go,there then he is going to be very out of step."

For more on Davos, see our special report on the World Economic Forum 2017.