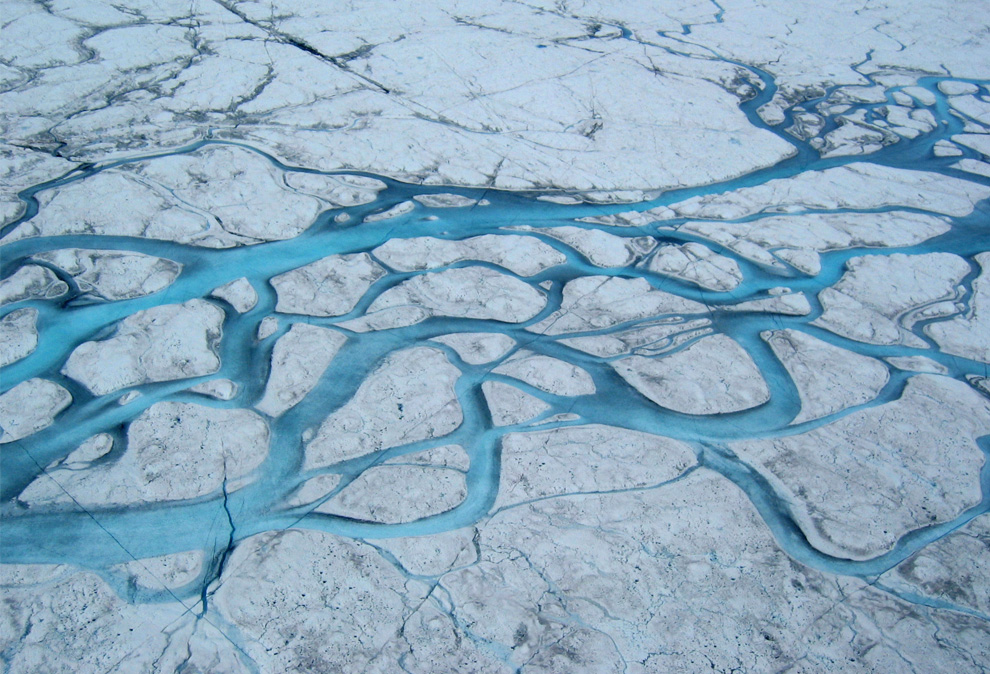 Large moulin on the surface of the Greenland ice sheet. Two recent studies of ice sheet motion and melting suggest that surface melting can produce dramatic drainage and seismic shifting on the Greenland Ice Sheet. But, surface melt that eventually lubricates the bottom of the ice sheet and accelerates its slide over bedrock may not be enough, by itself, to cause catastrophic loss of ice sheet mass: photo via Science Express, 17 April 2008

The Greenland Ice Sheet is melting at a near-record pace, thanks to some unusually warm weather and early season surges...

An image captured by NASA's Earth Observing-1 satellite shows the effects. The site recorded, about 300 miles north-northeast of Nuuk, shows a landscape etched with dark blue melt ponds and streams – a sharp contrast to the mostly white conditions recorded in the same place in 2014.

This year's melt is characterized by three spikes in the spring, reported the National Snow and Ice Data Center in Boulder, Colorado. "At this point, the pace rivals but is slightly behind the record surface melt and runoff year of 2012 (record since 1979), although ahead of the three preceding seasons," the center said in its most recent Greenland status report.

The 2014 melt season, though not nearly as dramatic as the 2012 season, was considered a high-melt year, the NSIDC reported.

This year, the melt so far has been concentrated in western and southwestern Greenland, tracking the the unusually warm temperatures, the NSIDC said. The air temperature in Nuuk, the capital and biggest community, hit 75 degrees on June 9, the highest June temperature ever recorded in Greenland.

Surface melt can have significant effects, NASA said. The resulting meltwater contributes directly to sea-level rise when it flows into the ocean and indirectly when it seeps down below the bases of glaciers and speeds up the breakdown of that ice, NASA said. The dark ponds and lakes created by the melt also darken the ice sheet's surface, absorbing more solar energy and reinforcing the melt cycle, NASA said.

"All these processes tend to accelerate further melting through so-called positive feedback mechanisms," Marco Tedesco, of Columbia University's Lamont Doherty Earth Observatory, said in a NASA statement. "The more melting you have, the more melting will increase in a way that melting feeds on itself. I call this melting cannibalism."

Yereth Rosen has been a journalist in Alaska since 1987. For most of that time, she was the sole Alaska-based reporter for Reuters. She has been reporting on energy issues, the environment, politics and all things Alaska � from oil spills to sled-dog races. She enjoys running, skiing and other outdoors pursuits. She lives in Anchorage with her family.