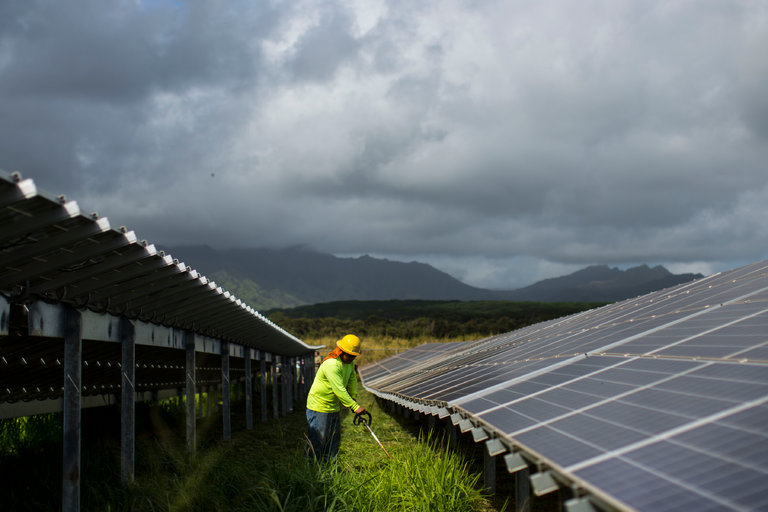 Kauai Island Utility Cooperative’s Anahola solar array in Hawaii in 2015. Hawaii passed legislation on Tuesday to align the state’s goals to the Paris climate accord. Credit Kent Nishimura for The New York Times

Hawaii on Tuesday became the first state to pass a law committing to the goals and limits of the Paris climate accord, defying President Trump, who announced last week that he would withdraw the United States from the historic agreement...

The state’s governor, David Y. Ige, signed two bills at a ceremony at the state’s capitol rotunda in Honolulu. One of the bills was explicitly geared toward reducing greenhouse gas emissions in accordance with the landmark goals adopted by world leaders with the Paris Agreement in 2015. The other will establish a task force to help the state improve soil health and remove carbon from the atmosphere.

He was joined by mayors from around the state, who signed an agreement to commit to the goals of the accord.

“Many of the greatest challenges of our day hit us first, and that means that we also need to be first when it comes to creating solutions,” Mr. Ige, a Democrat in his first term as governor, said in remarks before the signing. “We are the testing grounds — as an island state, we are especially aware of the limits of our natural environment.”

“I don’t think it’s a surprise for any of us to be here, when the president of the United States had climate change removed from the White House website,” he said.

Many references to climate change were removed from the White House site in January, as part of the routine digital turnover from one administration to the next. In April, the Environmental Protection Agency removed much of the climate change information from its website, saying in a news release that the updates were made to “reflect the approach of new leadership.”

Hawaii is one of more than 10 states that have joined the U.S. Climate Alliance, a coalition committed to upholding the Paris accord despite the federal government’s withdrawal from it. The alliance, announced by the Democratic governors of California, Washington and New York last week, also includes Minnesota, Virginia, Massachusetts and Vermont.

Those states are working parallel to a broader effort being coordinated by Michael Bloomberg, the former mayor of New York City, of cities, corporations and universities that together will submit a plan to the United Nations pledging to meet the targets for the United States specified by the accord. It is unclear how exactly that submission will take place.

On Tuesday, Gov. Jerry Brown of California met in Beijing with President Xi Jinping of China, upstaging the White House and further suggesting the determination of some states to hew to the climate accord.

Hawaii is on the front lines of climate change, so much so that in September, President Barack Obama used it as the base from which to discuss his legacy on the issue, as well as the continued threat from rising seas, extreme weather and other byproducts of a warming planet. A report published by the Environmental Protection Agency last August named a shortage of fresh water, ocean acidification and shoreline loss as threats that the state faces as a result of climate change.

The Paris accord, which required that each country submit an individual plan for reducing its carbon emissions, was agreed to by 195 countries in 2015. Though the plan was nonbinding, supporters saw it as an important framework for holding countries accountable in the fight against climate change.