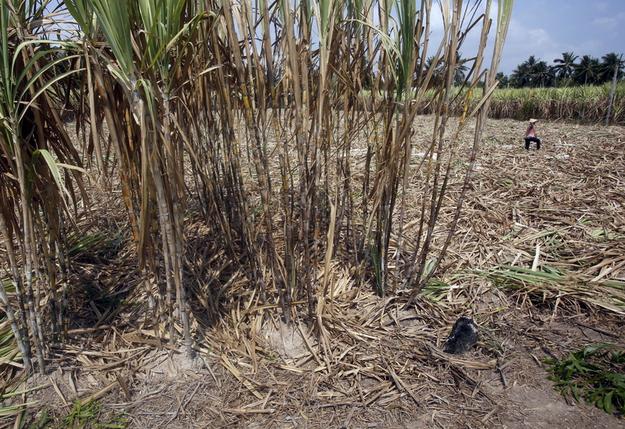 A farmer harvests dried sugarcane on her drought-stricken farm in Soc Trang province in the Mekong Delta, Vietnam March 31, 2016. Picture taken on March 31, 2016. Reuters/Kham
While China has been releasing water from a hydro-electric dam in the upper Mekong River to help relieve drought down river in Southeast Asia, little of it has flowed to Nguyen Van Thach's sugarcane farm in southern Vietnam...

After feeding his six cows with grass uprooted from a village nearby, Thach took a knife and cut a slice of sugarcane from his withered crop. "It's too salty," the 62-year-old farmer said, grimacing as he licked the piece of cane. "Even cows can't eat this."

Thach has quit growing sugarcane and is building houses instead to repay loans after his farm in Soc Trang province in Vietnam's Mekong Delta rice bowl lost 10 million dong ($449).

The sprawling Mekong Delta has been worst hit by salination in a region that provides half of Vietnam's rice and 60 percent of its shrimp and fish. 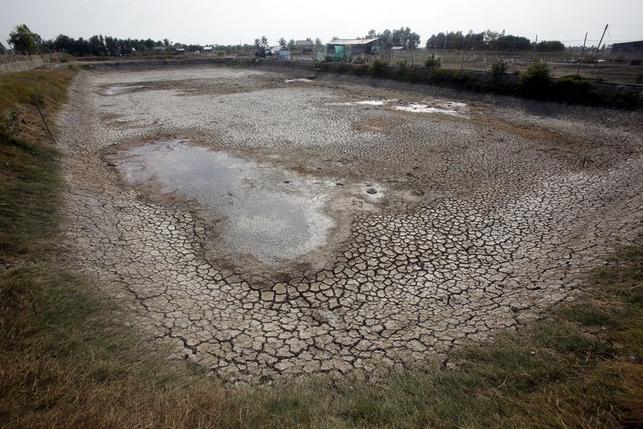 A shrimp farm affected by drought is seen in Bac Lieu province, in the Mekong Delta, Vietnam March 30, 2016. Reuters/Kham

It could be the new normal along the mighty Mekong, the 4,900 km (3,044 mile) river that sustains 60 million livelihoods as it flows through Laos, Thailand, Cambodia and Vietnam.

At least 39 hydro-electric dams are being built or under development in China, Laos, Thailand and Cambodia to meet the industrial demands of developing economies. Environmentalists say they are also endangering traditional agriculture downstream, where there is now less fresh water for drinking and irrigation.

The water China is discharging from its existing dams upstream has had little discernible impact as it dissipates into the expansive delta region where Thach and nearly 20 million other people live.

Vietnam is also suffering its most severe drought in 90 years, blamed partly on the El Nino weather phenomenon, which produces drier and hotter weather in Asia.

Climate change is also factor in the drought, said Nguyen Huu Thien, an independent expert on the Mekong Delta's ecology.

"In the context of climate change, this kind of crisis (in the Mekong Delta) is forecast to happen more often, for example it could be once in 20 years instead of once in 90 years."

Moreover, the delta, much of which is only two meters or less above sea level, has been sinking in recent years due to rising sea levels and heavy groundwater extraction from an ever increasing number of wells. Depleted water tables cause the ground to compact, allowing seawater to intrude into cropland and water supplies.

The drought and sea water intrusion is sapping Vietnam's economy, which leans on commodity exports. The agriculture sector contracted 2.69 percent in the first quarter of 2016 and overall economic growth of 5.56 percent was the slowest in two years.

Vietnam is a major global exporter for rice, coffee, pepper, fish and shrimp. Preliminary losses for those crops so far this year are at 5.57 trillion dong ($250 million), according to a government report as of April 14, nearly 70 percent of which was in the Mekong Delta.

The drought has affected a third of the coffee farms in the Central Highlands coffee belt, said the Vietnam Coffee and Cocoa Association. Vietnam is the world's second-biggest producer of the beans.

The government says 240,000 hectares (593,000 acres) of paddy have been destroyed in the world's third-largest rice exporter.

Southwest of the delta in Bac Lieu, a major shrimp-raising province, signs are planted on dried-up shrimp ponds advertising land for sale or for lease.

Vietnam, a major shrimp exporter to the United States, produced 91,900 tonnes in the January-March period, down 1 percent from a year ago, government data says.

To Viet Tien, 61, has been raising shrimp since 1982 and has never seen it so bad. "It's been too hot toward the bottom of the pond and shrimp can't stand it," he said. "On this (salty) soil, it's impossible to switch to another crop," Tien said. 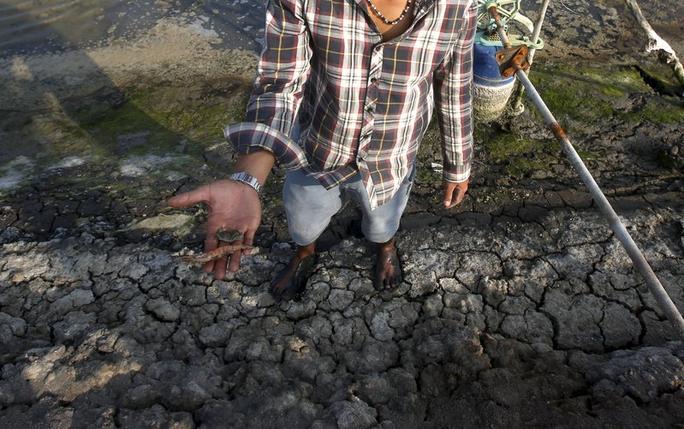 HOSTAGE TO HYDROPOWER Mekong Delta farmers are beholden to those managing the river beyond Vietnam's borders. Up to 70 percent of the water irrigating their crops comes from the river.

Pianporn Deetes of International Rivers, a U.S.-based advocacy group, said China has "absolute control" of the Mekong: "The region is being held hostage by hydropower development."

Environmental groups have waged campaigns for years to stop the dam construction to no avail.

Thailand, Cambodia and Laos have 11 new dams planned between them, potentially affecting 82 percent of Mekong river's water. Laos is building its economy around hydropower production to become the "Battery of Southeast Asia".

The big dams not only reduce water volume, but also retain alluvial soil, needed to consolidate subsidence in the sinking Mekong Delta. 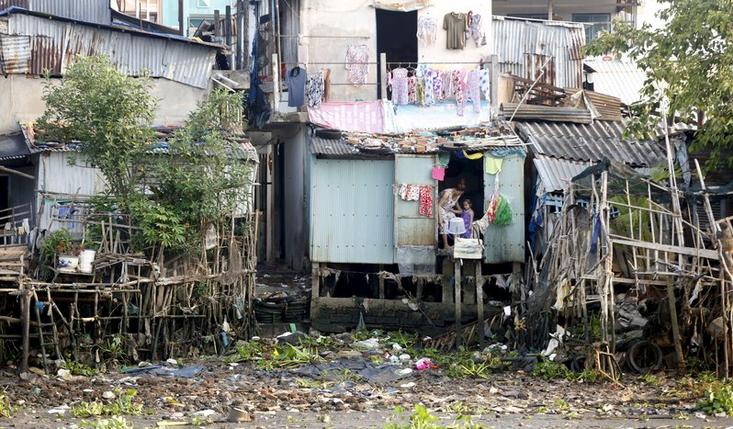 A woman holds a water bucket at a slum house by the Mekong river in Can Tho city, Vietnam April 2, 2016. Reuters/Kham

"The dams are killing the Mekong Delta," said Duong Van Ni, a lecturer at Can Tho university. "A shortage of fertile soil is the unavoidable death."

China will continue to release more water from its Jinghong dam in Yunnan province until the "low water period" is over, foreign ministry spokesman Lu Kang said on Tuesday.

The action was hailed as a goodwill gesture in the region, but also underlined the power China maintains over one of the world's great river basins.