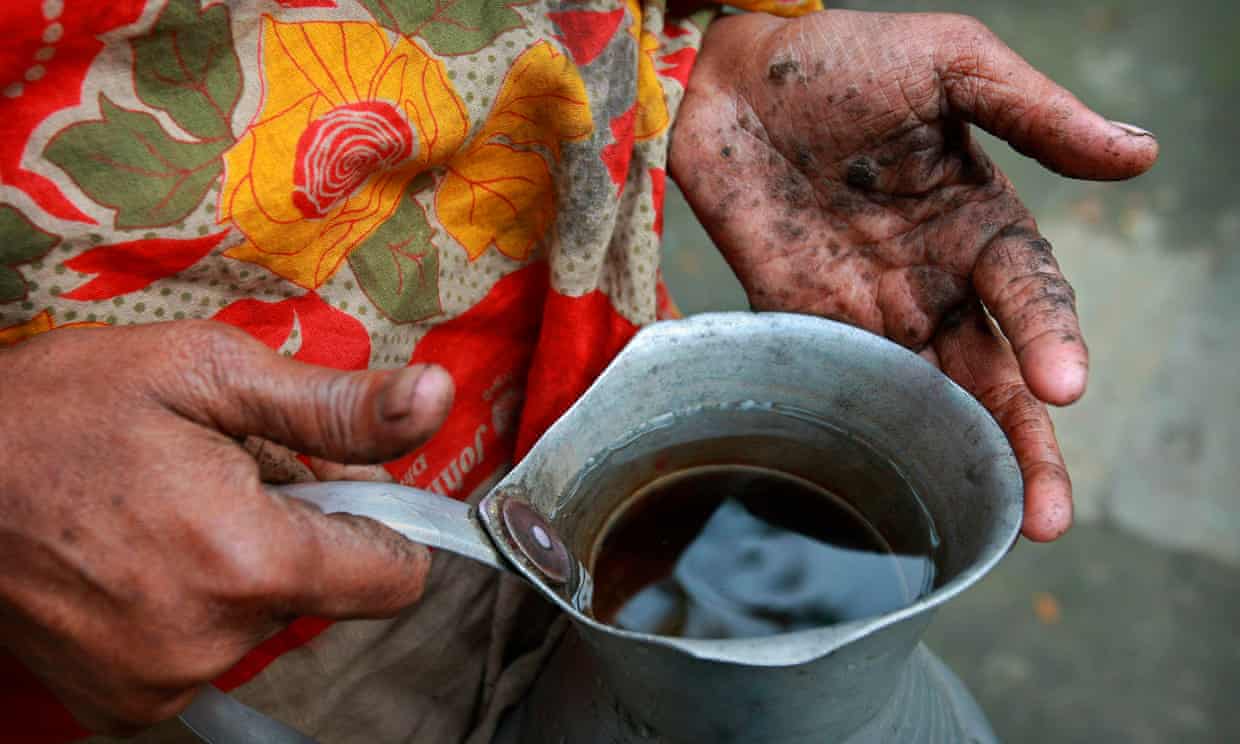 A villager in Chandipur holds a can of contaminated tube-well water. Many such wells in Bangladesh are now drying up altogether. Photograph: Pavel Rahman/AP

For centuries, the region has been shaped by its struggles with water. But where floods and cyclones once threatened, the menace now is a lack of water...

Every drink of water earns Seema, 15, a rebuke from her mother. The wells in their village in Bangladesh have run dry, and so everything they need must be carried by hand from up to half a kilometre away.

“Mother tells us not to take too much water and not to waste. It is very painful to get water. For this, we sometimes even resist quenching our thirst,” she says, standing outside the family’s one-room house in Mondumala with Deeba, her eight-year-old sister.

For the first time, the Bangladeshi government is considering declaring some of the country’s smallest districts officially “water stressed”, according to Professor Chowdhury Sarwar Jahan, a prominent hydrologist at the University of Rajshahi.

The region has been shaped by struggles with water for centuries, battles focused mostly on holding it back and surviving flooding, cyclones and rising seas. But now shifting weather patterns have brought a new challenge: dealing with scarcity.

In parts of the country, a combination of shifting monsoon patterns, rising temperatures and a surge in the construction of wells that is draining ground water levels has left some villages seriously short of water. Dhaka wants to make the crisis official.

“The government is planning to declare a water stress area for the first time,” says Jahan, who is also a member of the government’s groundwater task force.

He is working on a research project across a number of local councils, known as unions in Bangladesh. He is collecting data and exploring possible solutions, before the government makes the final decision to go ahead with an announcement that he fears will “cause some panic”.

But the anecdotal evidence of a major crisis is already devastating, with villagers forced to watch crops shrivel, walk hours each day to collect water, risk dehydration, and even interrupt their education.

“I go to a neighbouring village every morning to collect water after I wake up. The water supply stops after half an hour, so I go early to be the first in the queue,” says Jessy, an 11-year-old from Tanore who is in the fifth grade (equivalent to year 6 in the UK). “My mother goes in the afternoon to collect water for our meal but I have to go again at night. I get tired, and do not feel like concentrating on my studies afterwards.”

Urbanisation and economic development have driven a surge in water consumption in Bangladesh, with the problem compounded by rising sea and storm levels that push salt water into freshwater supplies along the coast.

Academics warned several years ago that the Barind Tract – the area of north-west Bangladesh where Rajshahi and the drought-hit villages lie – was particularly vulnerable, as a proliferation of tube wells tapped into groundwater faster than it could be replenished by rains.

Groundwater levels have been falling for decades during the dry season, and a region able to support fewer than 9,000 wells now has more than twice that number. The government water company has built 15,000 and there are up to 8,000 privately dug structures, many of them now drying up.

“Previously we could get water from tube wells, but even those have become dysfunctional in the last 10 years,” says Abraham, a 40-year-old from Mondumala who points out that the crisis has been gathering pace for two decades. “Subsequently, deep tube wells were installed but, in the last two to three years, even they have gone dry. As a result, we have to get water from a long distance away.”

The loss of clean water supplies is leading to a resurgence in illness, particularly in areas where wells have dried up, but there are small amounts of surface water in the ponds that dot rural Bangladesh.

“A lot of us use pond water for cooking. There is water in the pond at least during monsoon, but during summer even that is not there as much,” says Josna Begum, 28, from Chanduria union in Tanore. “We sometimes have to make do with filthy water, bathe with that. Children suffer from diseases a lot during summer, particularly with diarrhoea.”

He sees hope for health improvements from a pilot project to channel rainwater into storage reservoirs, which provide steady supplies and allow groundwater to replenish over time.

Overall, however, shrinking rainfall may also entrench poverty in areas where most people live off subsistence farming. The monsoons are no longer reliable: initially heavy, they flood fields only to dry up for so long that newly planted seedlings wither and die.

In response, farmers are shifting away from rice farming, formerly a staple. “We are now reducing our dependency on paddy and shifting to crops such as wheat, mustard, potato and corn, which require less water,” says Nur Mohammed, a 65-year-old farmer.

Several neighbours have decided to give up on rice for good, turning their fields into fruit orchards.

Jahan also warns that rising temperatures and expanding drought are threatening one of Rajshahi’s most impressive achievements in recent years, a dramatic improvement in air quality in a city that, until recently, had some of the dirtiest air in the world.

“When you enter a drought condition, there will be a shortage of soil moisture and then it’s very hard to keep dust particles out of the air,” he says. “In this area, it is largely the level of the water table that determines how dusty the air is.”

• Saad Hammadi contributed to this report

story by Emma Graham-Harrison and SM Atik in Rajshahi