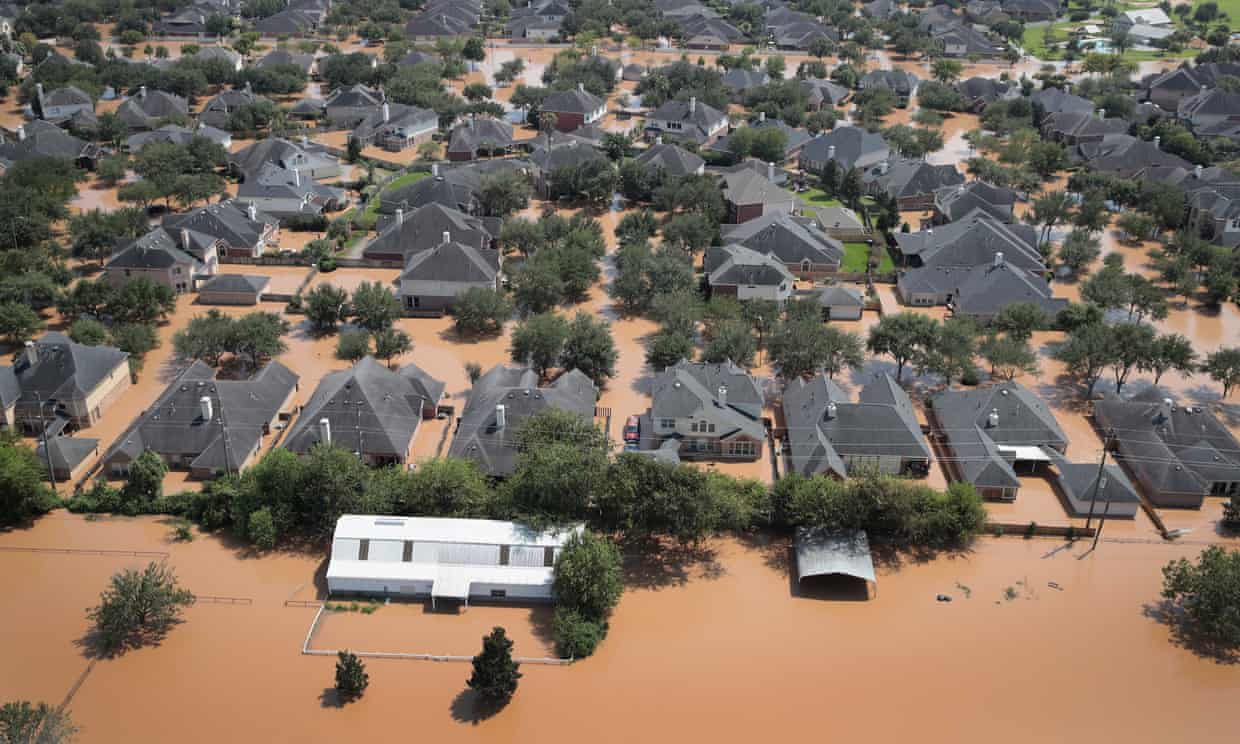 The variables in the climate change formula are mitigation, adaptation, and suffering. Denying the problem loads up on the suffering...

Human-caused climate change amplified the damages and suffering associated with Hurricane Harvey in several different ways. First, sea level rise caused by global warming increased the storm surge and therefore the coastal inundation and flooding from the storm. Second, the warmer atmosphere holds more water vapor, which intensifies extreme precipitation events like the record-shattering rainfall associated with Harvey. Third, warmer ocean waters essentially act as hurricane fuel, which may have made Harvey more intense than it would otherwise have been.

There are other possible human factors at play about which we have less certainty. For example, it’s possible that Harvey stalled off the coast of Texas because of changes in atmospheric circulation patterns associated with human-caused global warming. As climate scientist Michael Mann notes, his research has shown that these sorts of stationary summer weather patterns tend to happen more often in a hotter world, but we can’t yet say if that happened in Harvey’s case.

Private insurance companies don’t want to insure homes that face a significant risk of flooding, but with a lack of regulation and/or government insurance offered by NFIP, development in relatively high-risk flood areas can be profitable. That is, until a flood strikes. 85% of Houston homeowners don’t have flood insurance and will be unable to recover most of their losses from Hurricane Harvey. Others are covered by NFIP, which was already $24 billion in debt before Harvey. That’s because NFIP hasn’t been charging sufficiently high premiums, in large part because it has underestimated flood risks based on maps and projections that are sometimes decades out of date. And climate change is amplifying those flood risks.

It’s a challenging problem because for homeowners living in areas where flood risks have significantly increased, flood insurance premiums should hypothetically increase significantly to cover those risks. But factors like rising sea levels and expanding urban sprawl that contribute to that increased risk aren’t the fault of the homeowners, who can then become angry constituents for politicians working on updating NFIP. And so needed changes to the program have yet to be made.

As a result, the government is effectively subsidizing the costs associated with living in high-risk flood areas. Between 1978 and 2005, NFIP paid out $5.5 billion (9.6% of paid claims) to just 30,000 properties (0.6% of the total covered by flood insurance) that each flooded an average of five times. Because the NFIP premiums are too low, taxpayers end up footing billions of dollars of those payouts.

The situation is analogous to climate change. Without a price on carbon pollution, industries and individuals can dump carbon in the atmosphere for free. But that carbon pollution has costs that we eventually pay, in the form of increased property damage due to amplified storms like Hurricane Harvey, for example. Or from higher food prices when farmers are struck by an intensified drought, or decreased worker productivity in heat waves, or valuable coastal property lost to encroaching sea levels, or homes lost to bigger wildfires and increased costs to fight them – the list of climate costs goes on and on.

Those costs are eventually paid by taxpayers, but we’re picking up the tab for the polluters. It’s effectively a subsidy for the fossil fuel industry to the tune of trillions of dollars every year, and as with artificially cheap flood insurance premiums, we’re subsidizing risky behavior that ultimately causes severe damages.

The Trump administration is in denial

Ten days before Hurricane Harvey hit, the Trump administration rolled back the Federal Flood Risk Mitigation Standard. The policy was implemented by the Obama administration, and required taxpayer-funded public infrastructure projects to plan for future flooding risks. Much infrastructure within and around Houston is now underwater, and accounting for future flooding risks when replacing it would be smart. But the Trump administration considered this policy a burdensome regulation, claiming that the infrastructure permitting process has too many “inefficiencies.” Apparently those “inefficiencies” include saving taxpayer money by reducing future flood losses.

When asked about the causes and contributors to Hurricane Harvey and its damages, EPA administrator Scott Pruitt sidestepped the subject by using the Trump administration’s favorite strategy – attack the media:

I think for opportunistic media to use events like this to, without basis or support, just to simply engage in a cause and effect type of discussion, and not focus upon the needs of people, I think is misplaced.

Worse yet, EPA spokesperson Liz Bowman accused climate scientists of “engaging in attempts to politicize an ongoing tragedy.” It’s similar to the argument that we shouldn’t talk about gun control in the aftermath of a mass shooting. That’s precisely when we should be working on solutions to prevent these types of disasters from happening again and again.

Those who oppose climate policies will often argue that we can simply adapt to the consequences of human-caused climate change. Most recently, New York Times columnist Bret Stephens suggested that Harvey will just be a “speed bump” for Houston’s economy, and that the world should follow Houston’s example of “environmental resilience” by following “the path of its extraordinary economic growth.” The people in Texas suffering from having lost their homes and possessions probably aren’t comforted that Stephens considers Harvey a “speed bump” for the local economy (which coincidentally is probably not true). As renowned glaciologist Lonnie Thompson put it:

Global warming is here and is already affecting our climate, so prevention is no longer an option. Three options remain for dealing with the crisis: mitigate, adapt, and suffer.

There will be some of each, but the more we mitigate the problem by cutting carbon pollution, the less we will have to adapt to and suffer from the consequences of climate change. However, even adaptation takes action. We can take some steps to adapt to rising sea levels, but denying the problem by rolling back regulations aimed at doing just that shifts us further toward the suffering part of the equation. Economic growth has many benefits, but by itself does not move us in the direction of climate mitigation or adaptation.