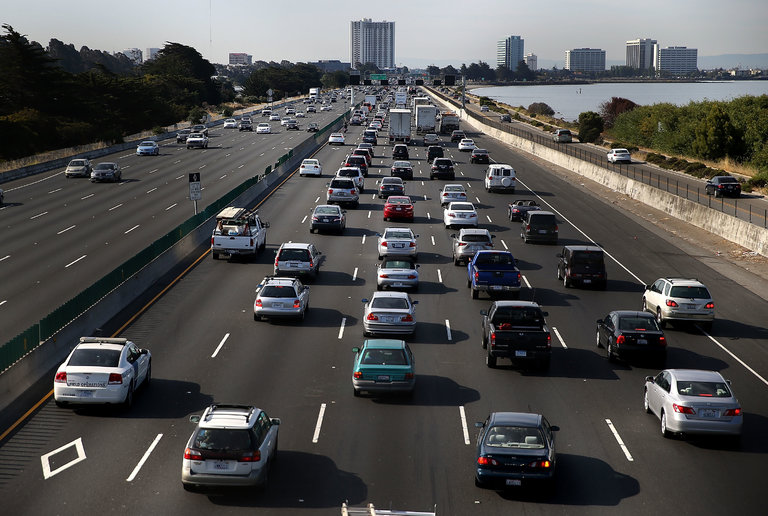 Of all the climate policies the Trump administration has promised to undo, auto emissions standards could be the most consequential...

America’s 250 million cars, together with other modes of transport, now emit more carbon dioxide than any other segment of the United States — more than its power stations, factories or households.

The sheer volume of auto emissions has made the fuel-efficiency goals introduced by President Obama, intended to reduce auto pollution and drive up gas mileage, one of the single biggest steps any nation has taken to fight global warming.

Those targets are now likely to be scaled back or even scrapped.

Aides to Mr. Trump, who campaigned on promises to revive the fossil fuel industry, roll back environmental regulations and “cancel” the Paris climate deal, signaled over the weekend that he would look for a quick exit from America’s commitment to reduce greenhouse gas emissions.

A Trump senior adviser, John Mashburn, better known for his advocacy of anti-abortion issues, told The Wall Street Journal that the administration intended to begin a comprehensive rethinking of all federal regulations — including “a review of the fuel-economy and emissions standards to make sure they are not harming consumers or American workers.”

The Trump transition team did not respond to a request for comment.

Automakers are seizing on the change in administration to argue for re-evaluating fuel economy and emissions rules, which are set to become progressively more stringent starting with 2017 model cars.

In a letter dated Nov. 10 to the Trump transition team, the Alliance of Automobile Manufacturers, which represents a dozen of the biggest car and light-truck makers, urged a reassessment of emissions rules that the group said posed a “substantial challenge” for the auto industry.

Those rules are designed to deliver a new-car fleet averaging 54.5 miles per gallon in 2025, compared with about 36 miles per gallon now. The Obama administration already has a review of that target underway.

“As car prices rise, it becomes vital to look at the full cost of regulatory initiatives,” the industry group’s chief executive, Mitch Bainwol, said in the letter.

“Automakers are asking him to let them guzzle oil and pollute more and increase our oil addiction,” Daniel F. Becker, director of the Safe Climate Campaign said, referring to Mr. Trump. “Are they going to go back to making early 20th-century vehicles?”

The possible easing of federal emissions rules throws a wrench in good news from scientists at the Global Carbon Project, an international science policy advisory group, which projected on Monday that global carbon dioxide emissions would grow by just 0.2 percent this year compared with levels in 2015, the third consecutive year emissions stayed relatively flat.

The scientists, who measure both emissions from human activity and absorption by oceans and plants, attributed the flat growth to lower emissions, especially from coal, by the world’s largest emitters, China and the United States. Those two countries together make up 44 percent of the world’s carbon dioxide emissions.

The Environmental Protection Agency had estimated that based on current fuel-efficiency targets, lifetime carbon dioxide emission reductions for all vehicles sold from 2017 to 2025 would total nearly two gigatons and save American consumers billions of gallons of fuel.

But climate-change forecasts remain grim. The World Meteorological Organization said Monday that preliminary data through September showed 2016 on course to be the hottest year on record, beating record-breaking temperatures in 2015.

Despite growing climate concerns, American automakers have struggled to make significant gains in overall fuel efficiency in recent years, as they increase the production of gas-guzzling light trucks, minivans and sport utility vehicles, which are subject to less stringent emissions standards, and better for companies’ bottom lines. (The automakers say that it is consumers, not automakers, who are driving this switch toward larger cars.)

And in the United States, automakers enjoy generous incentives for selling hybrid or electric vehicles. For each “green” car sold, automakers earn credits that then allow them to meet less-stringent fuel efficiency targets for their entire fleet. As currently practiced, those credits can have unintended consequences.

In a startling study published in February, researchers at Carnegie Mellon found that those incentives meant that each time an electric vehicle or other green car was sold in place of a conventional vehicle, fleet carbon dioxide emissions increased by as much as 60 tons and gasoline consumption increased by as much as 7,000 gallons a year.

The E.P.A. has said it thinks this trade-off is worthwhile, because green car sales could lay the foundation for a bigger switch to electric vehicles. But a relaxing of fuel emissions standards could derail that assumption.

Jeremy Michalek, a professor in the Department of Engineering and Public Policy at Carnegie Mellon, said that putting a price on carbon in the form of a carbon tax would be a simpler and more effective way to pursue fuel efficiency in the nation’s vehicles.

The idea of a carbon tax has been a contentious one in American politics. Last week, voters rejected a ballot proposal in Washington State that would have imposed a tax on greenhouse gas emissions, starting at $15 per metric ton. (A typical passenger car emits about five metric tons of carbon dioxide a year.)

But Mr. Michalek remains a proponent of carbon taxes. “Carbon pricing is giving people freedom,” he said, adding that might be a virtue Mr. Trump would appreciate.

“I could buy a fuel-efficient car, or a smaller car; I could still get the car I want, and drive it less,” he said. “Or I could continue to drive it as much as I want, but pay for the damage.”