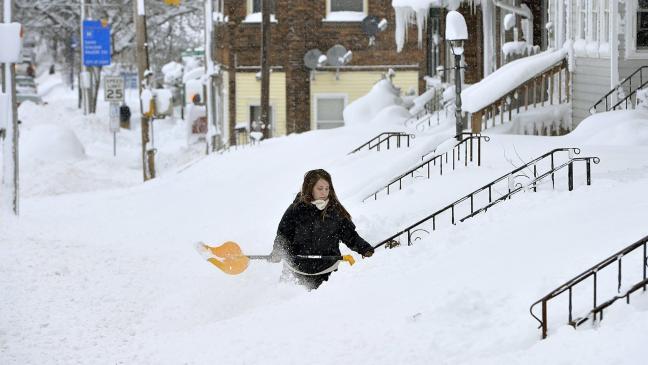 The lakefront city of Erie, Pa. has been inundated by several feet of snow this week, “shattering many records," the National Weather Service said...

The historic storm—a whopping 62.9 inches since Dec. 23, with more flakes to come—prompted the city's police department to declare a “Snow Emergency" due to dangerous and impassable roads.

While climate deniers might point to the cold weather as more proof of the "global warming hoax," climate scientist Katharine Hayhoe begs to differ.

"What's with all the snow?" she tweeted Tuesday. "Does it mean global warming is finished? Nope; it's exactly the opposite, in fact. Warmer temperatures are increasing the risk of lake-effect snow."

According to the National Weather Service, "Lake Effect snow occurs when cold air, often originating from Canada, moves across the open waters of the Great Lakes. As the cold air passes over the unfrozen and relatively warm waters of the Great Lakes, warmth and moisture are transferred into the lowest portion of the atmosphere. The air rises, clouds form and grow into narrow band that produces 2 to 3 inches of snow per hour or more."

What's with all the snow? Does it mean global warming is finished? Nope; it's exactly the opposite, in fact. Warmer temperatures are increasing the risk of lake-effect snow, and here's how: (thread)http://buffalonews.com/2017/12/26/you-think-its-snowy-in-buffalo-check-out-what-erie-pa-got/ …

If the Great Lakes aren't frozen, when cold winter weather systems sweep across the lakes, the air warms and becomes more humid. It then rises, the water vapour freezes, and gets dumped as snow. Read more: https://en.wikipedia.org/wiki/Lake-effect_snow …

What's the connection between lake-effect snow and global warming? First, as the world warms, it's harder for ice to form, and it isn't lasting as long. For 15 of the last 20 years, Great Lakes ice cover has been below the long-term average. pic.twitter.com/RUDn5dXcoe

What's the connection between lake-effect snow and global warming? First, as the world warms, it's harder for ice to form, and it isn't lasting as long. For 15 of the last 20 years, Great Lakes ice cover has been below the long-term average. pic.twitter.com/RUDn5dXcoe

Second, this is increasing the risk of days when it's still cold enough to snow, but the lakes aren't ice-covered. So lake-effect snow is on the rise.
Source: http://www.bioone.org/doi/abs/10.1016/j.jglr.2008.11.003?journalCode=jglr … pic.twitter.com/DyM8TeCPlT 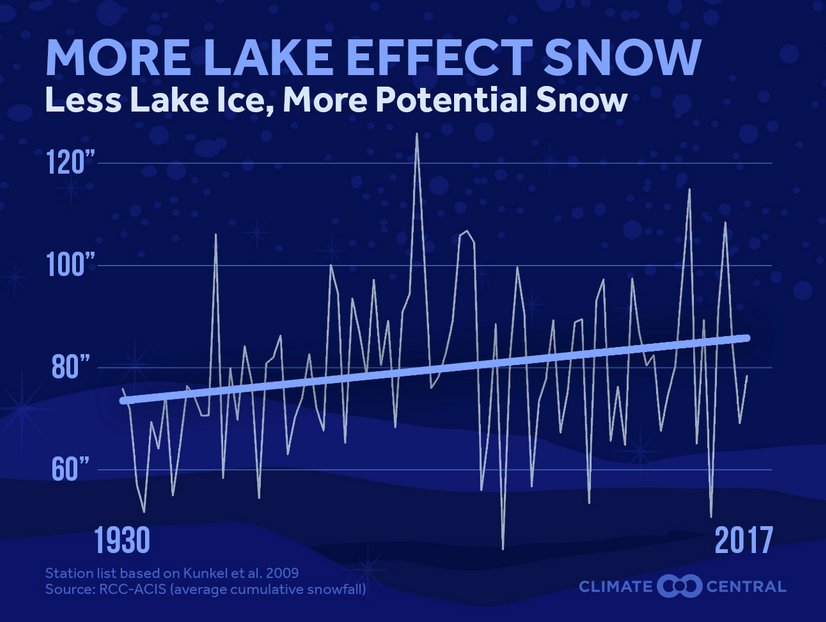 What do we expect for the future? Some continued increase in lake-effect snow over the next few decades, but also a transition from snow to rain, particularly in late fall and early spring. Read more: http://www.climatecentral.org/gallery/graphics/less-lake-ice-more-potential-lake-effect-snow …

So what's happening this year? Both natural and human factors are at work: the influence of natural cycles like La Nina and the NAO + exacerbated by a long-term warming trend driving increased risk of lake-effect snow = very low Great Lakes ice cover forecasts for this year. pic.twitter.com/mIQl3NCu90

7 7 Replies4 24 Retweets40
At the end of her twitter thread, Hayhoe joked, "When two feet of snow's just been dumped on our driveway, we all think—I'd like a little global warming now, please!"

Recent studies have shown the effect of climate change on regional precipitation. In a study published earlier this month, researchers from Dartmouth College, the University of Maine and the University of New Hampshire revealed how they were shocked to find that the Alaska Range has received an average of 18 feet of snow per year—that's more than double the average of eight feet per year from 1600-1840.

The likely culprit is none other than climate change. The authors suggested that warmer waters from the tropical Pacific and Indian Oceans caused a strengthening of the "Aleutian Low" pressure system with its northward flow of warm, moist air, driving most of the snowfall increases.