DONALD TRUMP AND THE TRIUMPH OF CLIMATE-CHANGE DENIAL... 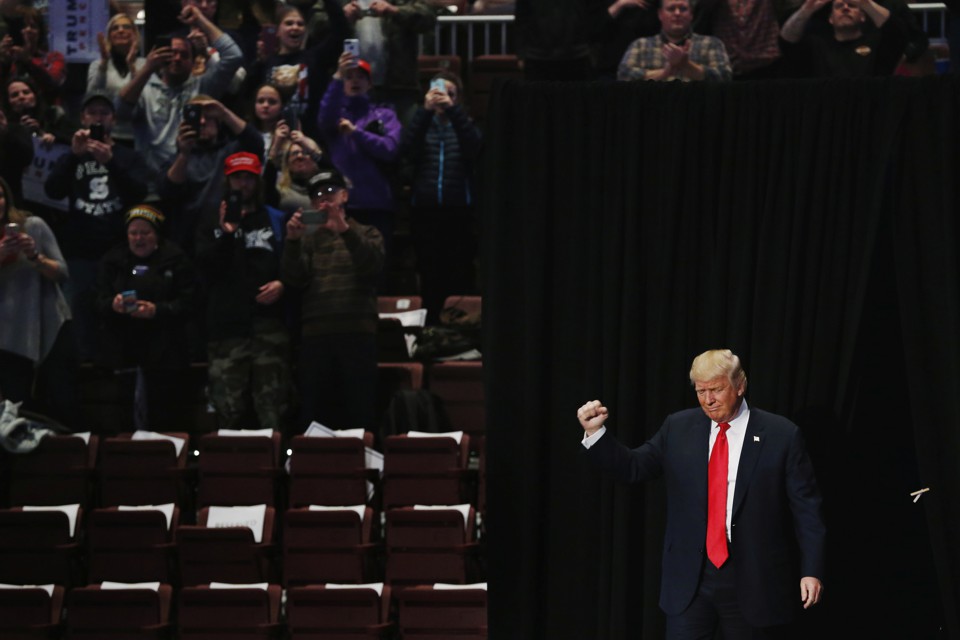 The science of man-made global warming has only grown more conclusive. So why have Republicans become less convinced it’s real over the past decade and a half?

Denial of the broad scientific consensus that human activity is the primary cause of global warming could become a guiding principle of Donald Trump’s presidential administration. Though it’s difficult to pin down exactly what Trump thinks about climate change, he has a well-established track record of skepticism and denial. He has called global warming a “hoax,” insisted while campaigning for the Republican nomination that he’s “not a big believer in man-made climate change,” and recently suggested that “nobody really knows” if climate change exists. Trump also plans to nominate Republicans to lead the Environmental Protection Agency and the Energy Department who have expressed skepticism toward the scientific agreement on human-caused global warming.

Indeed, Trump’s election is a triumph of climate denial, and will elevate him to the top of a Republican Party where prominent elected officials have publicly rejected the climate consensus. It’s not that the presidential election was a referendum on global warming. Climate change barely came up during the presidential debates, and voters rated the environment as a far less pressing concern than issues like the economy, terrorism, and health care. But that relative lack of concern signals that voters have not prioritized action on climate change, if they want any action taken at all. Trump’s victory sends a message that failing to embrace climate science still isn’t disqualifying for a presidential candidate, even as scientists warn that the devastating consequences of global warming are under way and expected to intensify in the years ahead.

If Trump fails to take climate change seriously, the federal government may do little to address the threat of a warming planet in the next four years. A presidential administration hostile to climate science also threatens to deepen, or at the very least prolong, the skepticism that already exists in American political life. “If the Trump administration continues to push the false claim that global warming is a hoax, not happening, not human caused, or not a serious problem, I’d expect many conservative Republican voters to follow their lead,” said Anthony Leiserowitz, the director of Yale University’s Program on Climate Change Communication.

A presidential administration hostile to climate science also threatens to deepen the skepticism that already exists in American political life.

The entrenchment of climate-science denial is one of the ways the United States appears to be exceptional relative to the rest of the world. A comparative 2015 study of nine conservative political parties in countries such as Canada, Germany, and Spain concluded that “the U.S. Republican Party is an anomaly in denying anthropogenic climate change.” Meanwhile, Americans were least likely to agree that climate change is largely the result of human activity in a 2014 survey of 20 countries, including China, India, Australia, and Great Britain.

Scientific reality does not seem to have escaped the distorting influence of political polarization in the United States. A paper published in Environment earlier this year suggests that as the Tea Party pushed the Republican Party further to the political right, it helped solidify skepticism of man-made climate change within the GOP. That happened as the Tea Party incorporated “anti-environmentalism and climate-change denial into its agenda,” the authors write, and subsequently became part of a broader “denial countermovement” made up of fossil-fuel companies as well as conservative think tanks and media outlets.

As the ideological divide between Republicans and Democrats has widened, so has the partisan divide over climate change. Scientific evidence that human activity is the leading cause of global warming has continued to accumulate in recent years, and the evidence for man-made climate change is now overwhelming. In spite of that, Republicans are slightly less convinced than they were a decade and a half ago that the Earth is getting warmer as a result of human activity. Democrats have moved in the opposite direction and become more likely to say that man-made climate change is real. This year, Gallup found that while 85 percent of Democrats believe human activity has lead to higher temperatures, only 38 percent of Republicans agree.

In a deeply divided country, adopting views on climate change that conflict with scientific evidence can actually be a rational choice. Liberals and conservatives frequently spend time with like-minded individuals, and people across the political spectrum may have a better chance of fitting in if they embrace shared partisan beliefs—regardless of whether those beliefs contradict scientific fact. This helps explain why highly educated Republicans are actually more likely to reject climate science. Yale University professor Dan Kahan put it this way in a 2012 Nature article:

For members of the public, being right or wrong about climate-change science will have no impact. Nothing they do as individual consumers or individual voters will meaningfully affect the risks posed by climate change. Yet the impact of taking a position that conflicts with their cultural group could be disastrous. … Positions on climate change have come to signify the kind of person one is. People whose beliefs are at odds with those of the people with whom they share their basic cultural commitments risk being labelled as weird and obnoxious in the eyes of those on whom they depend for social and financial support.

The complexity of climate science may have made it easier for global warming to get caught up in partisan politics as well. Voters look to the positions adopted by their political party as a kind of mental shortcut when deciding what to make of complicated subjects such as climate change, according to research from Cynthia Rugeley of the University of Minnesota, Duluth, and John David Gerlach of Western Carolina University. That means that if Trump continues to voice climate skepticism after taking office, he could further cement skepticism among conservative voters. “I think it will reinforce climate denial among those who already doubt its existence. To that extent, yes, it will deepen denial,” Rugeley said in an interview.

The power and influence of corporations relative to the government might also help explain why skepticism has thrived. An ideological preference for free markets may make some politicians and voters in the United States more sympathetic to arguments that environmental regulations will hurt the private sector—even if those arguments are used to dismiss climate science. According to Matthew Paterson, a professor of international politics at the University of Manchester in England, skepticism over government intervention might help explain why climate skepticism also seems relatively entrenched in Anglo-Saxon countries such as Great Britain and Australia, though to lesser degrees there than in the United States. Fossil-fuel interests, in particular, have managed to inject doubt into the climate debate in the United States, Paterson argues, by “funding deniers, and anti-climate politicians, and giving them a public voice.”

The more voters are skeptical of man-made climate change, the easier it may be for politicians to justify inaction. It’s impossible to predict what Trump will do in office, but he already appears poised to dismantle President Obama’s agenda to combat climate change. He also seems willing to fill his administration with individuals who have cast doubt on the scientific consensus. Trump wants Scott Pruitt, the Oklahoma attorney general, to serve as administrator of the Environmental Protection Agency. Pruitt recently co-wrote an article claiming that scientists “disagree about the degree and extent of global warming and its connection to the actions of mankind.” Trump’s choice to run the Energy Department, former Texas Governor Rick Perry, has claimed “the science is not settled” on climate change. And his pick to lead the Interior Department is Republican Representative Ryan Zinke of Montana, who has reportedly said that global warming is “not a hoax, but it’s not proven science either.”

Despite significant pockets of skepticism and denial, particularly among conservative Republicans, there are plenty of Americans across the political spectrum who believe that man-made climate change exists. Gallup recently found that a majority of Americans believe human activity is causing global warming, and feel worried about the rise in temperatures. Concern over climate change increased among Democrats and Republicans from 2015 to 2016 with 40 percent of Republicans and 84 percent of Democrats reporting concern this year. If that concern continues to increase, skepticism may decline over time among American voters.

Whether skepticism dissipates or intensifies may depend in part on the actions of the Trump administration over the next four years. If Trump makes climate science and policy a high-profile target, he might provoke a backlash among moderate Republicans who do believe global warming is a serious problem. But skepticism within the GOP could intensify if Trump’s administration publicly misrepresents climate science and dismisses efforts to combat global warming as an expensive waste of time. If that happens, Democrats and liberal activists will counterattack, a dynamic that might cause partisan attitudes to harden further. That could leave the political debate over global warming more fractured than ever...