DONALD TRUMP IS A THREAT TO SURVIVAL OF LIFE ON EARTH: IF NUCLEAR WAR DOESN'T GET US, FALLING OXYGEN LEVELS WILL... 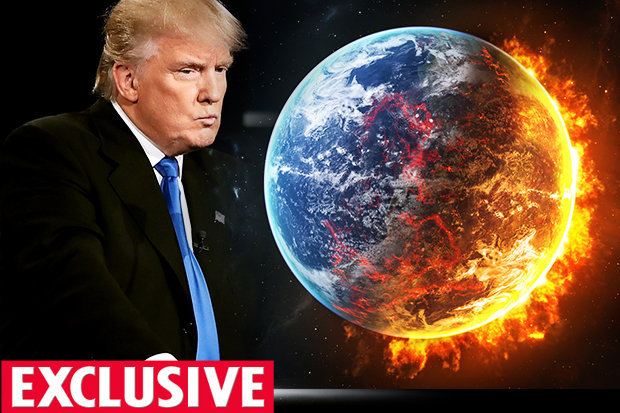 Since President Donald Trump announced the U.S. withdrawal from the Paris Climate Agreement, the world has been looking towards other countries to pick up global leadership on climate change action...

France recently announced that it plans to become the first country to phase out all oil and gas exploration and production by 2040, according to a draft bill. What does this signal for markets and other governments? Is France stepping forward into a new era of global leadership on climate change?

Under the Paris Agreement on climate change, countries agreed to keep the global temperature rise to well below 2 degrees of warming and strive for 1.5 degrees. Impacts are still expected at 2 degrees of warming, but at least some of the world’s coral reefs could survive. Beyond this level, coral reefs, which a quarter of the world’s marine life and half a billion people depend on, are expected to be completely wiped out.

At the United Nations this week, French President Emmanuel Macron described the Paris climate deal as a “pact between generations” and has told Donald Trump that the climate deal will not be renegotiated. Macron also stated that the “door will always remain open” for America to re-join, and suggested he hopes to convince Trump to do so.

Keep up with this story and more by subscribing now

The terrifying math of climate change shows us that in order to stay within the 2-degree safety limit, the majority of the world’s existing fossil fuel reserves need to stay in the ground and not be burned.  Macron’s plans to rule out fossil fuel exploration are essential, as exploration for new fossil fuels risks pushing the world over dangerous thresholds. Climate change is an existential threat.  At six degrees of warming, which we could get if all remaining fossil fuels were burned, falling oxygen levels could be a threat to the survival of life on earth. France’s new policy to phase out oil and gas exploration is absolutely in line with the science, and if anything, the year of 2040 is too late – exploration needs to be ruled out earlier.

In the past year Macron has showed great leadership on climate change. After Trump’s withdrawal from the global climate agreement, Macron strongly rebuked Trump on this, and his twitter statement to “make the planet great again” rapidly went viral.

In July, Macron announced that France would ban sales of petrol and diesel cars by 2040, and this was followed by a similar announcement by the UK to tackle air pollution. Germany is considering a similar policy, while Norway had already decided it will only allowing sales of 100% electric or plug-in hybrid cars by 2025. China is also looking at ending the sales of fossil fuel cars, following France and the UK.

France is also a leader in the area of green finance, with the launch of a 7 billion euro green bond earlier this year - the largest and longest issuance of green bonds to date.  France has been a pioneer in the green bond market, and has also been the first nation to introduce mandatory climate and carbon risk reporting from institutional investors, pension funds and insurance companies.

All this makes Paris more competitive as a green finance hub, and the City of London may have to take notice of this amid the risk that Brexit-related disruption leads to the relocation of financial institutions. With the costs of clean technology falling, financial centers including Paris and London have now been laying out plans to seize the green finance opportunity, notably by mobilizing the capital required for the low-carbon transition. There remains the risk that the UK could be losing its influence on important global issues due to the major distraction of Brexit.

France is not a major producer of oil, so the major effect is in terms of signaling for markets around the world.  For example, it was previously found that France had one of the largest shale gas reserves in Europe, but it has already passed a ban on fracking.  In 2011, France voted to ban fracking outright, taking into account public opinion.

Other governments must now take up the mantle and ban exploration of fossil fuels, to reduce climate risks.  The unprecedented power of hurricanes over the past month, with Harvey, Irma, and now Maria, have shown that the costs of climate change will be dramatic. It is not possible to “adapt” – we must reduce emissions, and fast.

As such extreme weather events are expected to intensify over coming years, people will recognize which governments are protecting their people, and which leaders have failed to do so. Governments that step up to reduce climate risks and take advantage of green growth opportunities will reap the rewards in terms of national prosperity. Ultimately, Macron action’s will stand the test of time, while Trump is set to find himself increasingly isolated.