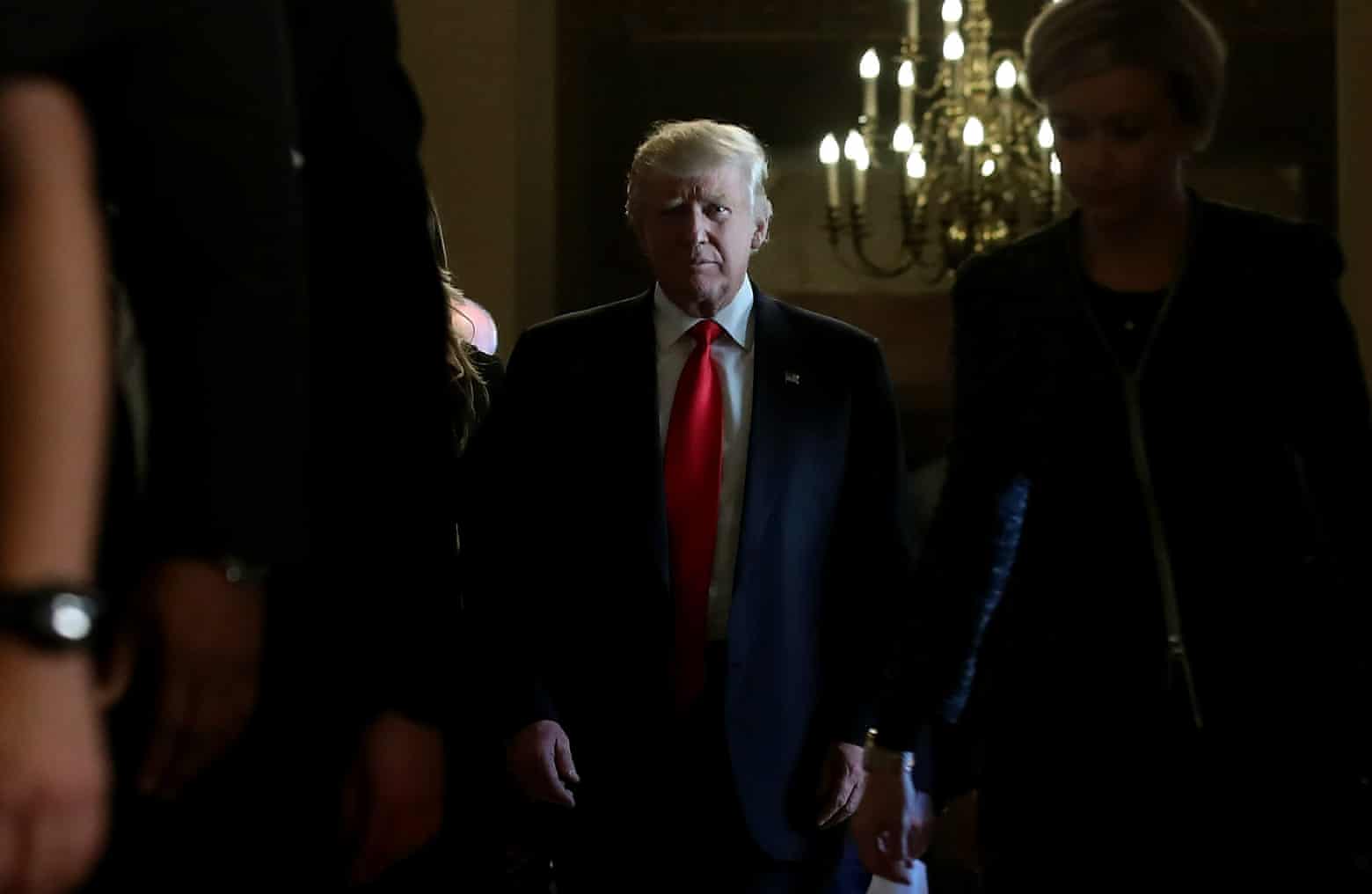 Trump has called global warming a ‘bullshit’ Chinese-invented hoax and wants the US to exit the Paris climate deal. Photograph: Mark Wilson/Getty Images

Leading scientists say the climate denier’s victory could mean ‘game over for the climate’ and any hope of warding off dangerous global warming...

The ripples from a new American president are far-reaching, but never before has the arrival of a White House administration placed the livability of Earth at stake. Beyond his bluster and crude taunts, Donald Trump’s climate denialism could prove to be the lasting imprint of his unexpected presidency.

“A Trump presidency might be game over for the climate,” said Michael Mann, a prominent climate researcher. “It might make it impossible to stabilize planetary warming below dangerous levels.”

Kevin Trenberth, senior scientist at the US National Center for Atmospheric Research, added: “This is an unmitigated disaster for the planet.”

Trump has vowed to sweep away the climate framework painstakingly built over Barack Obama’s two terms. At risk is the Paris climate accord, which only came into force last week, and Obama’s linchpin emissions reduction policy, the Clean Power Plan.

At a pivotal moment when the planet’s nations have belatedly banded together to confront an existential threat, a political novice who calls global warming a “bullshit” Chinese-invented hoax is taking the helm at the world’s foremost superpower.

“Millions of Americans voted for a coal-loving climate denier willing to condemn people around the globe to poverty, famine and death from climate change,” said Benjamin Schreiber, climate director at Friends of the Earth US. “It seems undeniable that the United States will become a rogue state on climate change.”

US conservatives are already rubbing their hands in glee at the prospect of a bonfire of regulation. Trump wants the US to exit the Paris deal, which commits nations to keeping the global temperature rise below a 2C threshold, potentially setting off a cataclysmic domino effect where other countries also drop out or ease off efforts to decarbonize. The 2C limit, which was already a stern challenge, now appears perilous.

The Clean Power Plan, the main tool to cut American emissions, is also targeted for elimination, along with billions of dollars in clean energy funding. Republicans will also turn off the tap of aid flowing to developing nations already struggling with climate change-driven sea level rise, heatwaves and drought.

Bitterly contested fossil fuel projects such as the Keystone development and the Dakota Access pipeline, which has caused unprecedented uproar among native American tribes, would likely be waved through, with Trump promising to “lift the Obama-Clinton roadblocks to allow these vital energy infrastructure projects to go ahead”.

Environmentalists are already aghast at Trump’s presidential preparations. He has appointed Myron Ebell, director at a conservative thinktank, to oversee transition plans for the Environmental Protection Agency, which Trump has casually earmarked for abolition. Ebell has said global warming is “nothing to worry about” and that the Clean Power Plan is “illegal”.

Shortlists drawn up for key Trump administration posts have also raised alarm. Oil billionaire Harold Hamm is being touted as energy secretary, while former vice presidential candidate Sarah Palin could make a stunning comeback as interior secretary, putting her in charge of US public lands, including treasures such as Yellowstone and Yosemite national parks. Palin is an enthusiastic proponent of oil and gas drilling, describing the fossil fuels as “things that God has dumped on this part of the Earth for mankind’s use”.

Republicans have already used Congressional committees to hound climate scientists and green groups and this badgering may escalate once climate denial is official White House doctrine. It’s understood that scientists at Nasa are already bracing themselves for cuts to climate research programs.

Predicting Trump’s plans, however, largely relies upon reading the runes from his discursive policy speeches, which regularly dissolved into vituperative diatribes while on the campaign trail.

At the heart of his energy and climate thinking is an “America first” policy where “draconian climate rules” are repealed and the US escalates its production of coal, oil and natural gas. In May, Trump sported a coal miner’s helmet at a rally in West Virginia, a state with a long history of mining, to underscore his message that the “war on coal” is over and that jobs will flow back to the stricken industry. 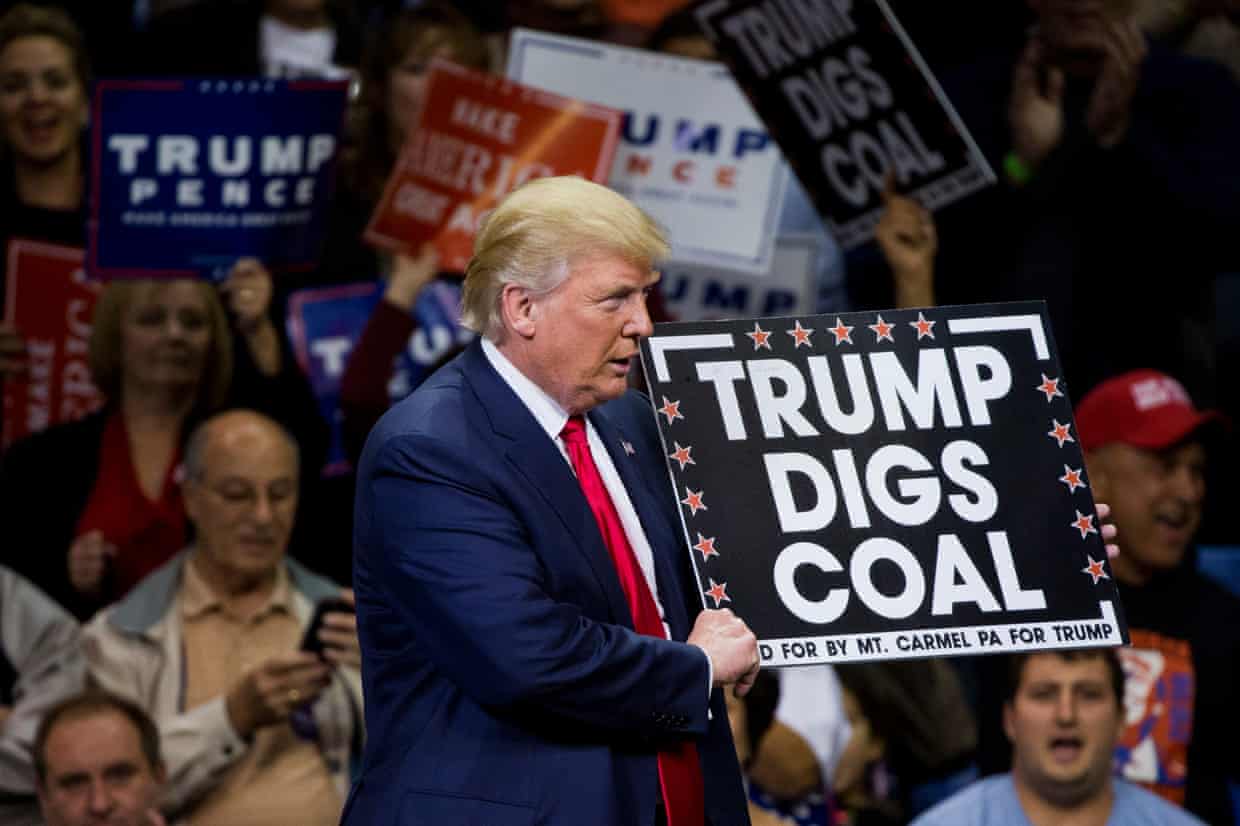 “Under my administration,” Trump said, “we’ll accomplish complete American energy independence. Complete. Imagine a world in which our foes, and the oil cartels, can no longer use energy as a weapon. It will happen. We’re going to win.”

These bromides to American industrial strength helped propel Trump to the White House but aren’t tethered to reality. US coal production slumped 10% last year, with mining jobs shrinking by 12%. Over the same 12-month period, the US oil industry lost $67bn. These woes have been caused by market forces, rather than onerous regulation, and even Trump’s authoritarianism doesn’t extend far enough to change that.

“As president, Donald Trump will pretend climate change does not exist,” said Prof Tom Lyon of the University of Michigan’s business school. “This is an increasingly untenable position, even for committed climate skeptics.

“His energy policy will encourage investment in high-carbon energy sources that will look foolish in retrospect. And he will anger much of the rest of the world by reneging on policies designed to address global challenges.” 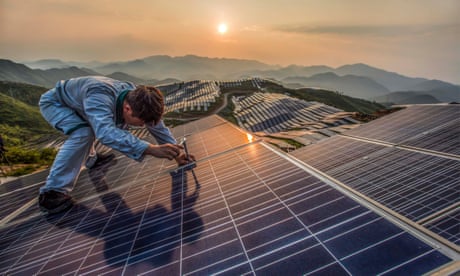 Renewables made up half of net electricity capacity added last year...

US greenhouse gas emissions have started to taper off in recent years but a Trump presidency would see a resurgence, with an analysis by Lux Research finding that carbon dioxide output would be 16% higher than the current trajectory should the real estate magnate complete a second term.

This would give the world a hefty shove towards climate disaster and fatally wound the US’s reputation as a global leader. Should other major emitters such as China, India and the European Union fail to make compensatory emissions cuts the planet will likely spiral into runaway climate change where tens of millions of people are displaced by rising seas, food insecurity and conflict, leading to an unprecedented international humanitarian disaster.

Major US cities including New York, Miami and Boston would face inundation. California, already suffering its worst dry spell in 1,200 years, may stage ‘megadroughts’ that last 20 or even 30 years. The Pentagon has warned climate change poses a “threat multiplier” to US national security, to hoots of derision from Republicans.

The shift to a low-carbon economy already has its own momentum, however, with the cost of solar and wind power tumbling in recent years. Nearly 100 coal power plants were retired in 2015, with renewables accounting for two-thirds of all new electricity generation.

New York and California both have their own ambitious emission reduction plans, conservative states such as Iowa are embracing wind energy, and innovations from companies such as Tesla, in solar panels and battery storage, are being snapped up by homeowners.

Trumpian interference can only do so much to slow this trend, although plodding progress isn’t enough to stave off climate catastrophe. The UN has warned that global emissions must peak by 2020 and then be sharply reduced in order to avoid the worst. This shrinking window risks being clouded entirely if the US is to choke itself, and the rest of the world, on its fumes. 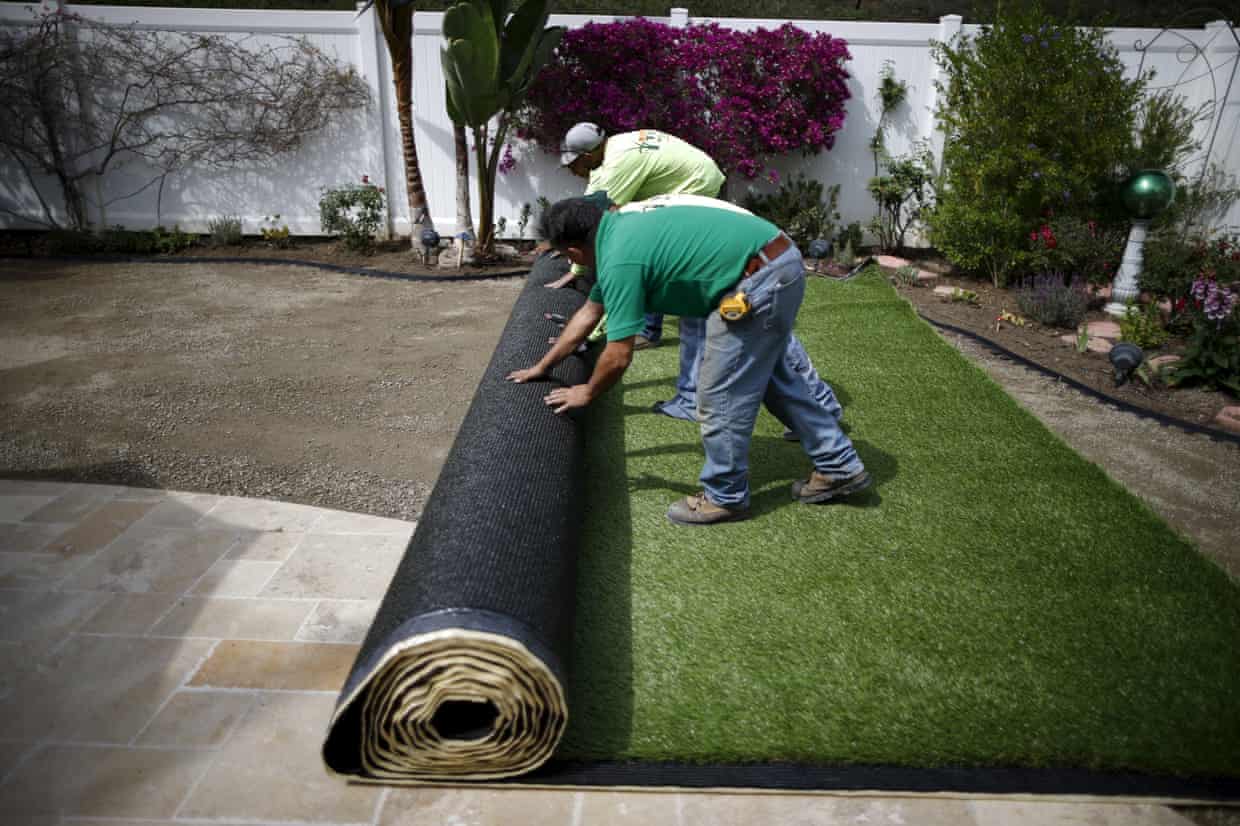 Artificial turf is rolled out after digging up a lawn due to California suffering its worst dry spell in 1,200 years. If climate action fails under Trump, the US state may experience ‘megadroughts’ that last 20 or 30 years. Photograph: Lucy Nicholson/Reuters

Stunned environment groups, faced with triumphant climate denialism in all branches of government, are trying to muster defiance. “This could be devastating for our climate and our future,” admitted Michael Brune, executive director of the Sierra Club. “But Trump must choose wisely or we guarantee him the hardest fight of his political life. We won’t be in a defensive crouch for the next four years, licking our wounds.

“If he tries to go backwards on climate change he’ll run headlong into an organized mass of people who will fight him in the courts, in Congress and on the streets.”

Others are more conciliatory, with former vice president Al Gore proffering an olive branch along with an enormous dollop of optimism. “Last night President-elect Trump said he wanted to be a president for all Americans,” Gore said on Wednesday. “In that spirit, I hope that he will work with the overwhelming majority of us who believe that the climate crisis is the greatest threat we face as a nation.”

Whether or not Trump becomes a belated convert to the reality of climate change, the physics of global warming remain unchanged.

2016 will be the warmest year on record, beating a mark set only last year. These extremes, where India experiences a temperature of 51C (123F) and the Arctic is robbed of almost all of its winter snowfall, are set to become the norm within a decade. American citizens, from Alaska to Louisiana, are already being uprooted due to the rising seas, a situation that will become commonplace.

Trump knows enough of the gargantuan shifts underway to build a seawall for his golf course in County Clare, Ireland. His Mar-a-Lago club in Florida may have to be next. Whether he extends his concern from beyond his own business interests to the rest of the world remains to be seen.