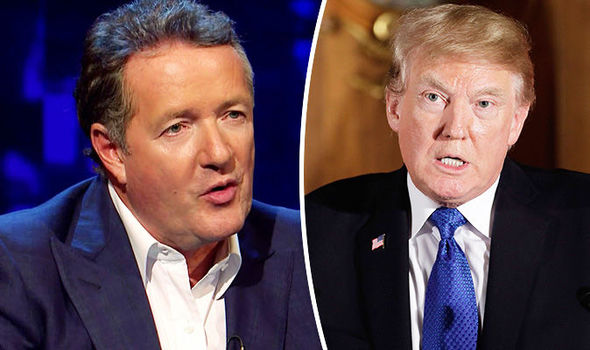 In ITV interview US president also says he would take tougher stand on Brexit than Theresa May...

Donald Trump has said the United States could re-enter the Paris climate change agreement – and that he would have taken a “tougher stand” in Brexit negotiations than Theresa May.

The US president said his country could join the international accord if it had a “completely different deal” but called the existing agreement a “terrible deal” and a “disaster” for the US.

Narcissistic buddies meet in the Piers and Donald show

In remarks on Brexit that will add to the pressure on the prime minister, Trump said he “would have negotiated it differently” and that he had “a lot of problems” with the European Union, warning of a trade battle between the US and the bloc. He also said that the US would look to strike a “great” trade deal with the UK as soon as EU restrictions ended and the UK could open talks on new trading agreements.

Trump made the comments in an interview with Piers Morgan for ITV, which was broadcast on Sunday night.

In a preview of the interview released on Friday, showed Trump said he was prepared to apologise for retweeting inflammatory videos posted by the deputy leader of the far-right group Britain First.

He also told Morgan he had “tremendous respect for women”; often posted on social media from his bed; and had not received an invitation to the wedding of Prince Harry and Meghan Markle. He said he was happy for the couple – despite Morgan noting that Markle had described Trump as a divisive misogynist.

The US president met with global condemnation when he announced in June 2017 that the US was pulling out of the climate agreement. The landmark treaty was signed by 195 nations after intense negotiations in 2015, with countries making voluntary pledges to cut carbon emissions in an attempt to restrict an increase in global temperatures to less than 2C this century.

Trump said in the ITV interview that he was a “believer in clean air and clean water” but the Paris agreement would have been a disaster for the US. However, despite initially saying he was “completely out” of the accord, Trump said there could be a way back for the US.

“I believe in clean air. I believe in crystal-clear, beautiful … I believe in just having good cleanliness in all. Now, with that being said, if somebody said go back into the Paris accord, it would have to be a completely different deal because we had a horrible deal.

“As usual, they took advantage of the US. We were in a terrible deal. Would I go back in? Yeah, I’d go back in. I like, as you know, I like Emmanuel [Macron]. I would love to, but it’s got to be a good deal for the US.”

Asked if he believed in climate change, Trump said: “There is a cooling, and there’s a heating. I mean look, it used to not be climate change, it used to be global warming. That wasn’t working too well because it was getting too cold all over the place. The ice caps were going to melt, they were going to be gone by now, but now they’re setting records. They’re at a record level.”

Trump’s comments about Brexit will add to the pressure on May amid growing rumours of discontent in the Conservative party over her approach.

“Would it be the way I negotiate? No, I wouldn’t negotiate it the way it’s negotiated,” Trump said.

“But I have a lot of respect for your prime minister, and I think they’re doing a job. I think I would have negotiated it differently. I would have had a different attitude.

“I think I would have said that the EU is not cracked up to what it’s supposed to be, and I would have taken a tougher stand in getting out. I have a lot of problems with the EU.”

The US president described the relationship between his country and the EU as a “very unfair situation”, adding: “We cannot get our product in. It’s very, very tough. Yet, they send their product to us – no taxes, very little taxes. It’s very unfair. I’ve had a lot of problems with EU, and it may morph into something very big from that standpoint, from a trade standpoint.”

Trump was also asked in the interview to speak out in defense of women and clarify previous remarks that have provoked a backlash against the president. “Well, I think we have to evolve,” he said. “If we don’t evolve, there’s something missing. But I have tremendous respect for women.”

Trump told Morgan that he wrote his own tweets, sometimes when lying in bed. “Well, perhaps sometimes in bed, and perhaps sometimes at breakfast, or lunch, or whatever. But generally speaking, during the early morning or during the evening, I can do that. But if I’m very busy during the day … and I’ll sometimes just dictate out something really quickly, and I’ll give it to one of my people to put it on.”

Click here to learn about the most disruptive new book on global warming facts and research. Climageddon, The Global warming Emergency and How to Survive it.