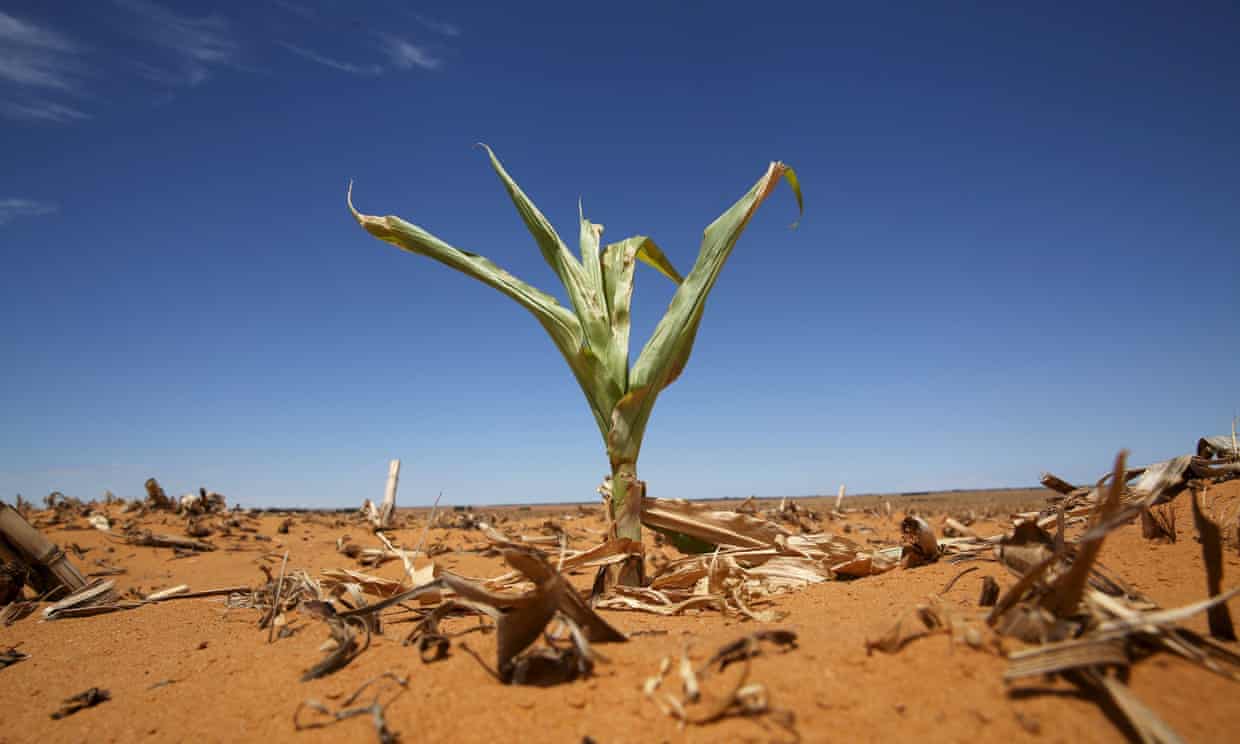 A maize plant among other dried maize in a field in Hoopstad in the Free State province, South Africa. The country suffered its driest year on record in 2015. Photograph: Siphiwe Sibeko/Reuters

Unusually strong El Niño, coupled with record-high temperatures, has had a catastrophic effect on crops and rainfall across southern and eastern Africa...

More than 36 million people face hunger across southern and eastern Africa, the United Nations has warned, as swaths of the continent grapple with the worst drought in decades at a time of record high temperatures.

The immediate cause of the drought which has crippled countries from Ethiopia to Zimbabwe is one of the strongest El Niño events ever recorded. It has turned normal weather patterns upside down around the globe, climate scientists say.

But with the world still reeling from record-high temperatures in February, there are fears that the long-term impacts of climate change are also undermining the region’s ability to endure extremes in weather, leaving huge numbers of people vulnerable to hunger and disease.

The worst hit country in the current crisis is Ethiopia, where rains vital to four-fifths of the country’s crops have failed. Unicef has said it is making plans to treat more than 2 million children for malnutrition, and says more than 10 million people will need food aid.

“Ethiopia has been hit by a double blow, both from a change to the rainy seasons that have been linked to long-term climate change and now from El Niño, which has potentially led the country to one of the worst droughts in decades,” said Gillian Mellsop, Unicef representative to Ethiopia.

The crisis has been damaging even to Ethiopians not at immediate risk of going hungry. It has truncated the education of 3.9 million children and teenagers, who “are unable to access quality education opportunities because of the drought”, she said. 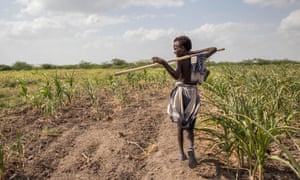 A boy walks through failed crops and farmland in Afar, Ethiopia. Four-fifths of crops in the country have failed. Photograph: Mulugeta Ayene/AP

Neighbouring countries grappling with hunger after crops failed include Somalia, Sudan and Kenya, and altogether the failed rains have left more than 20 million people “food insecure” in the region.

The drought caught many officials by surprise, because although El Niño was forecast, the weather event normally brings more rain to the region, not less.

“The typical pattern that you would expect with El Niño is very dry weather in southern Africa, but slightly wetter than normal in eastern Africa,” said Dr Linda Hirons, a research scientist at the National Centre for Atmospheric Science.

“So the fact that we have had parts of eastern Africa experiencing drought is unusual … but every single El Niño event manifests itself differently.” 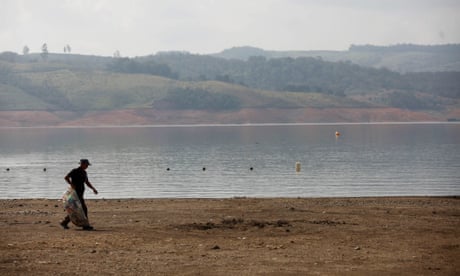 A man collects waste on the exposed banks of Lake Calima, Colombia. High temperatures due to El Niño have reduced the level of water in the reservoir. Photograph: Christian Escobar Mora/EPA

Current climate event is still strong but it is too early to say whether it will be most powerful on record, says World Meteorological Organisation

In southern Africa, the drought caused by El Niño was expected, but it has been even more severe than feared, with rains failing two years in a row.

Overall nearly 16 million people in southern Africa are already going hungry, and that number could rise fast. “More than 40 million rural and 9 million poor urban people are at risk due to the impacts of El Niño’s related drought and erratic rainfall,” the World Food Programme has warned.

Zimbabwe, once the region’s bread basket, is one of the worst hit countries. In February, the country’s president Robert Mugabe declared a state of disaster due to the drought, and in less than a month official estimates of people needing food aid has risen from 3 million to 4 million.

Neighbouring countries are also scrambling to find food aid, including South Africa, whose ports are the main entry point for relief across the region.

“We are seeing this as a regional crisis, a cross-country humanitarian crisis,” said Victor Chinyama. “In each country maybe the numbers [of hungry people] are nowhere near as much as Ethiopia, but if you put these numbers together as a whole region, you get a sense of how large a crisis this is.” 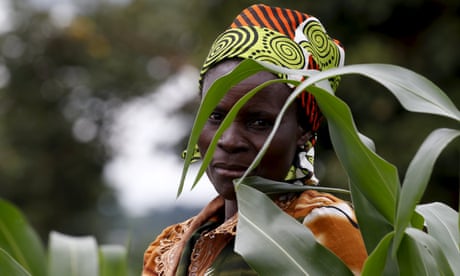 More than a third of households are now going hungry, he said. Families that used to eat two meals a day are cutting back to one, and those who could once provide a single meal for their dependents are now entirely reliant on food aid, he said.

Beyond the immediate scramble to get food to those who need it, aid workers in the region say the drought has served as reminder that communities vulnerable to changing weather patterns need longer-term help adapting.

“In the past it was one big drought every 10 years, then it came to one drought every five years, and now the trends are showing that it will be one every three to five years. So we are in a crisis alright, that is true.

“But it’s going to be the new norm. So our responses need to appreciate that … there is climate change, and it’s going to affect the people that we work with, the communities we serve.”