Strong winds fanned flames from a large wildfire in eastern Tennessee on Monday, damaging a large number of structures in picturesque Gatlinburg, and prompting widespread evacuations...

Local officials report that the fire has killed 3 people and destroyed hundreds of homes, businesses and other structures in and around Gatlinburg, Tennessee.

The Chimney Top Fire is part of a broader outbreak of blazes burning across the Southeast amid unusually mild and dry conditions during what will be one of the top 5 warmest years in U.S. history, and the hottest year globally.

The high winds that hit on Monday, and are continuing in some areas on Tuesday, dramatically escalated the risk of unpredictable and extreme fire behavior. The fire's advance on Gatlinburg and other areas caught thousands off-guard, according to the National Park Service.

"It's the apocalypse on both sides (of downtown)."

The fire has taken a heavy toll on popular tourist destinations in the Great Smoky Mountains National Park, the most visited national park in the United States. The entire national park is closed as of Tuesday.

Flames are also threatening Dollywood, the theme park founded by legendary country singer Dolly Parton, which boasts some of the wildest roller coasters in the country.

"Gatlinburg City officials have reported numerous structures completely lost to fire including businesses in the downtown area and private homes throughout the area," the park said.

The wind gusts enabled the fire to leapfrog across long distances and quickly advance toward Gatlinburg, while also felling trees that ignited still more areas.

While the proximate cause of this fire may have been human action, perhaps even arson, climate conditions have primed the area for fires.

The unusually mild and dry summer and fall in the lower 48 states, in particular, has played a role in priming the Southeast for wildfires. The region has had its second-warmest January through October on record, according to the National Centers for Environmental Information (NCEI), with South and North Carolina each having their warmest such period on record.

Many locations have had their warmest and driest fall on record, including parts of Tennessee.

Precipitation departure from average for Jan to Oct. 2016. Image: NOAA/NCEI

The Southeast has been extremely dry this year so far, with five states particularly affected: Alabama, Georgia, North Carolina, Tennessee and South Carolina.

Over the longer term, human-caused climate change is also heightening the wildfire risk. The Southeast may not be well known for its fires, but it actually has the largest number of wildfires of any region of the country, with an average of about 45,000 per year, according to a 2014 federal climate report. This number is likely to increase as temperatures rise, drying out soils faster and raising fire risks.

According to the Knoxville News Sentinel, 14,000 people were evacuated on Monday and Tuesday, and the Tennessee National Guard was called in to assist local firefighters in battling the Chimney Top Fire.

Many people pleas for assistance on social media Monday night as flames encroached on homes and hotels, with others using Facebook, Twitter and other tools to update family and friends.

The fire in Gatlinburg advanced on the tourist community as a cold front moved into the parched area. That front, even though it brought heavy rain, actually served to worsen the situation given the high winds associated with it. 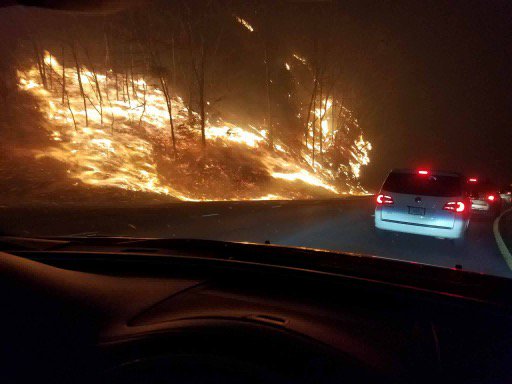 Sharon Pinyan, leaving Gatlinburg, reports… “Evacuated Gatlinburg. A car behind us caught on fire due to the flames jumping the road.”

The rain from Monday night and other rounds of showers this week will not be nearly enough to overcome the long-term moisture deficits in this region, however, and climate outlooks predict that the drought will deepen and expand across the South during the winter.

This means the region's fire woes may continue into the early winter.

Seasonal drought outlook showing likely persistence and expansion of drought in the South through the winter. Image: noaa

Fires have already been burning for weeks in Tennessee, Georgia and North Carolina, spreading a dense blanket of smoke across the region, prompting unhealthy air quality alerts.

In Gatlinburg, officials said hundreds of homes and other buildings, including a 16-story hotel, were damaged or destroyed by flames. Emergency officials ordered evacuations in downtown Gatlinburg and Pigeon Forge and in other areas of Sevier County near the Smoky Mountains while crews continued to battle the blaze.e

No deaths have been reported, though several people were injured, emergency officials said. More than 1,000 people are in shelters.

Ryan DeSears, general manager of Ripley's Aquarium of the Smokies, told WBIR-TV the building was still standing and all workers had been evacuated late Monday. However, he said workers were anxious to return to check on the well-being of the 10,518 animals.

Temperature departures from average for Jan to Oct 2016. Image: NOAA/NCEI

"I think we racked up deficits that are going to be too much to overcome with just one storm system," said Mark Svoboda, director of the National Drought Mitigation Center in Lincoln, Nebraska.

The pessimistic drought outlook is based in large part on the expectation that a weak La Niña event in the tropical Pacific Ocean will persist for much of the winter, which would favor a prevailing winter storm track away from the southern tier of the U.S.

Additional reporting by the Associated Press