WASHINGTON — The Environmental Protection Agency has removed dozens of online resources dedicated to helping local governments address climate change, part of an apparent effort by the agency to play down the threat of global warming...

A new analysis made public on Friday found that an E.P.A. website has been scrubbed of scores of links to materials to help local officials prepare for a world of rising temperatures and more severe storms.

Among the now-missing pages are those detailing the risks of climate change and the different approaches states are taking to curb emissions. Also edited out were examples of statewide plans to adapt to weather extremes.

An E.P.A. spokesman said the original pages have been archived and remain available by searching through the agency’s web archive, a link to which is at the top of its energy resources page.

The analysis, from the Environmental Data and Governance Initiative, which monitors changes to federal environmental agency websites, described the amount of removed data as “substantial.” The energy resources website is the first site to which the E.P.A. has returned a large portion of material since pages dealing with climate science were removed from public view on April 28. 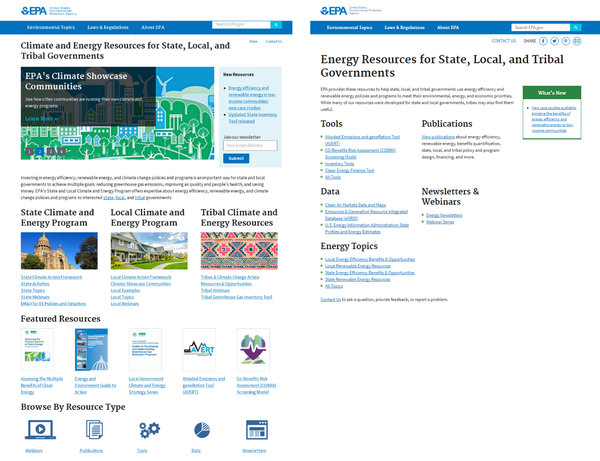 A screen grab provided by the Environmental Data and Governance Initiative showing before, left, and after images of the E.P.A.’s climate and energy website.

In the interim, a notice said “this page is being updated” and added that the site would be changed to reflect the agency’s priorities under the Trump administration. When material was restored with changes in late July, the report said, the site had been cut to 175 pages from about 380.

The report comes on the heels of a four-year blueprint of priorities the E.P.A. issued that does not include climate change. The 38-page draft strategic plan, issued for public comment this month, does not use the phrase.

Gina McCarthy, administrator of the E.P.A. under Mr. Obama, said in a statement that one of the agency’s most important jobs was to provide scientific and technical expertise so local officials could write appropriate policies. She said the now-discarded data was collected and shared over a number of years to help states, cities and towns build resilience to fiercer storms, floods, droughts and wildfires.

“There is no more significant threat than climate change and it isn’t just happening to people in far-off countries — it’s happening to us,” Ms. McCarthy said. “It is beyond comprehension that E.P.A. would ever purposely limit and remove access to information that communities need to save lives and property. Clearly, this was not a technical glitch, it was a planned shutdown.”

Toly Rinberg of the Environmental Data and Governance Initiative said that there was no evidence the E.P.A. had destroyed any records. The original pages are available from several sources, including the Internet Archive, which maintains a mirror of the E.P.A. website as it appeared near the end of the Obama administration.

A number of resources, like emissions inventories, remain intact on the E.P.A. site.