EARTH'S BEES AND OTHER POLLINATORS NEED HUMAN HELP: WHAT CAN WE DO? 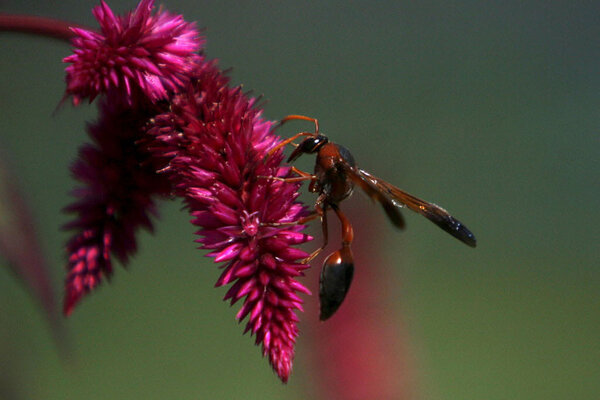 A wasp lands on a flower in a garden in Srinagar, India, Sept. 8, 2009. Bees and other pollinators face increasing risks to their survival, threatening foods such as apples, blueberries and coffee worth hundreds of billions of dollars a year, the first global assessment of pollinators showed on Friday. Fayaz Kabl/Reuters/File

Pollinator populations around the world are declining, threatening hundreds of billions of dollars worth of agriculture. Humans are part of the problem, say scientists, but they can also be part of the solution.

The impending extinction of bees, butterflies, and other pollinators could cost the world hundreds of billions in food crops if nothing is done to stop it, according to a new scientific report from the United Nations.

The report is based on the work of scientists around the world. It includes no new research, but draws on scientific studies from scientists working with a number of UN agencies to provide information on biodiversity.

Some 124 nations approved the report, written by a body called the Intergovernmental Science-Policy Platform on Biodiversity and Ecosystem Services, which will gather in Kuala Lumpur this Friday.

The report’s findings were chilling for lead author Simon Potts. "We are in a period of decline and there are going to be increasing consequences," he told the Associated Press.

The consequences go beyond the disappearance of species. Scientists say that popular foods like coffee, apples, and blueberries could be threatened. The report found that between $235 billion and $577 billion of the world’s food crops make it to market because of pollinators. The loss of that revenue, and food, could be devastating for farmers and the world.

Yet for all the concern, the causes of the problem are murky. The report identified several possible culprits, disease, the spread of cities, declining crop diversity, the use of pesticides (particularly the neonicotinoid pesticide), and global warming. Addressing the problem will require an equally diverse range of solutions, observers say.

"The report confirms the overwhelming majority of the scientific opinion regarding pollinator health — that this is a complex issue affected by many factors,” said Christian Maus, of Bayer pharmaceuticals in a statement to AP. “Protecting pollinators and providing a growing population with safe, abundant food will require collaboration." Bayer produces neonicotinoid pesticides.

Research has linked the use of neonicitinoids on certain crops to declining honeybee populations. The report points to agricultural pesticide management as a key area of concern for pollinators.

"Pesticides, particularly insecticides, have been demonstrated to have a broad range of lethal and sub-lethal effects on pollinators in controlled experimental conditions,” said the report.

The report also highlights monoculture agriculture, with wide swaths of farmland supporting a single crop, as another source of woe for pollinators. In England, the government pays farmers to plant wildflowers in their hedgerows, British scientist Robert Watson told AP. In the United States, the newly formed Pollinator Health Task Force is also looking into ways to encourage farmers to diversify plants grown on agricultural lands.

Europe has lost two species of bumblebees to extinction thus far. The United States has lost one.

How can humans help fix the problem?

Even planting small gardens with flowers, or like English farmers, planting wildflowers along field borders, could help the pollinator population out. A move towards organic farming, with the reduced use of pesticides, might improve the outlook for bees, butterflies, and other pollinators.

The bottom line is that something must be done. "If we want to say we can feed the world in 2050, pollinators are going to be part of that," Dennis vanEngelsdorp, a bee expert at the University of Maryland who was not featured in the report, told AP.

This report contains material from The Associated Press and Reuters.