EARTH’S POLES ARE SHIFTING BECAUSE OF CLIMATE CHANGE... 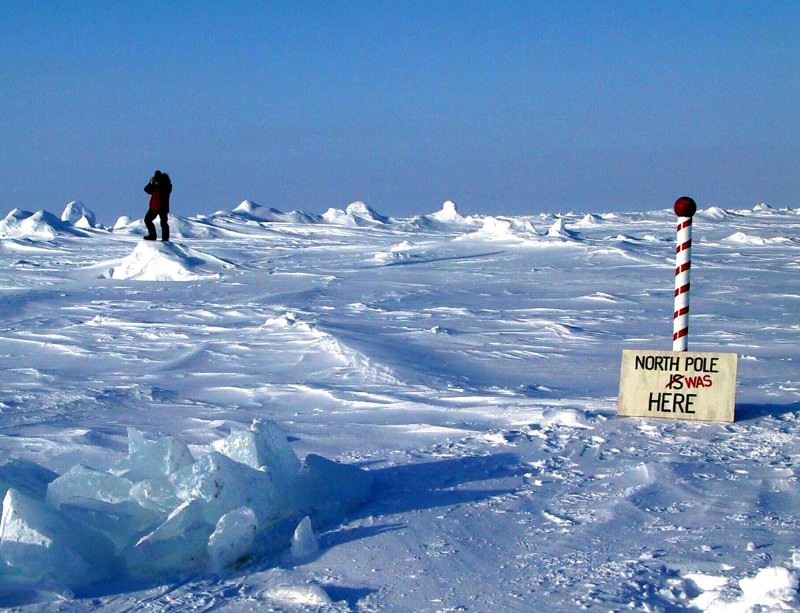 Climate change is causing the North Pole’s location to drift, owing to subtle changes in Earth’s rotation that result from the melting of glaciers and ice sheets. The finding suggests that monitoring the position of the pole could become a new tool for tracking global warming.

Computer simulations had suggested that the melting of ice sheets and the consequent rise in sea level could affect the distribution of mass on the Earth’s surface. This would in turn cause the Earth’s axis to shift, an effect that has been confirmed by measurements of the positions of the poles.

Now, Jianli Chen of the University of Texas at Austin and colleagues have shown that melting due to our greenhouse-gas emissions is making its own contribution to the shift.

The wobble in Earth’s axis of rotation is a combination of two major components, each with its own cause. One is called the Chandler wobble and is thought to arise because the Earth is not rigid. Another is the annual wobble, related to Earth’s orbit around the sun.

Remove these wobbles, and you are left with an additional signal. Since observations began in 1899, the North Pole has been drifting southwards 10 centimetres per year along longitude 70° west – a line running through eastern Canada.

This drift is due to the changes in the distribution of Earth’s mass as the crust slowly rebounds after the end of the last ice age. But Chen’s team found something surprising. In 2005, this southward drift changed abruptly. The pole began moving eastwards and continues to do so, a shift that has amounted to about 1.2 metres since 2005.

To work out why the pole changed direction, Chen’s team used data from NASA’s GRACE satellite, which measures changes in Earth’s gravity field over time. The data allowed them to calculate the redistribution of mass on Earth’s surface due to the melting of the Greenland and Antarctic ice sheets and mountain glaciers, and the resulting rise in sea level. It correlated perfectly with the observed changes in the mean pole position (MPP).

“Ice melting and sea level change can explain 90 per cent of the [eastward shift],” says Chen. “The driving force for the sudden change is climate change.”

Chen’s team calculated that the biggest contribution is coming from the melting of the Greenland ice sheet, which is losing about 250 gigatonnes of ice each year. Another big factor is the melting of mountain glaciers, which contributes about 194 gigatonnes per year. The contribution from Antarctica adds up to 180 gigatonnes per year, but there is considerable uncertainty here because changes in the gravity field due to Earth’s crust rebounding are less well understood over Antarctica than elsewhere.

Since the MPP can be accurately measured using multiple independent techniques, its position and drift can be used to gauge the extent of ice sheet melting, especially in between the end of the ageing GRACE mission and the launch of the next generation of gravity-field-measuring satellites, says Chen.

Jean Dickey of NASA’s Jet Propulsion Laboratory in Pasadena, California, who was not associated with the study, agrees. “It’s a way to monitor climate change by continuing to measure the deviation [of the MPP] from what we have seen in the past,” she says.

Chen presented his findings this week at the annual meeting of the American Geophysical Union in San Francisco.