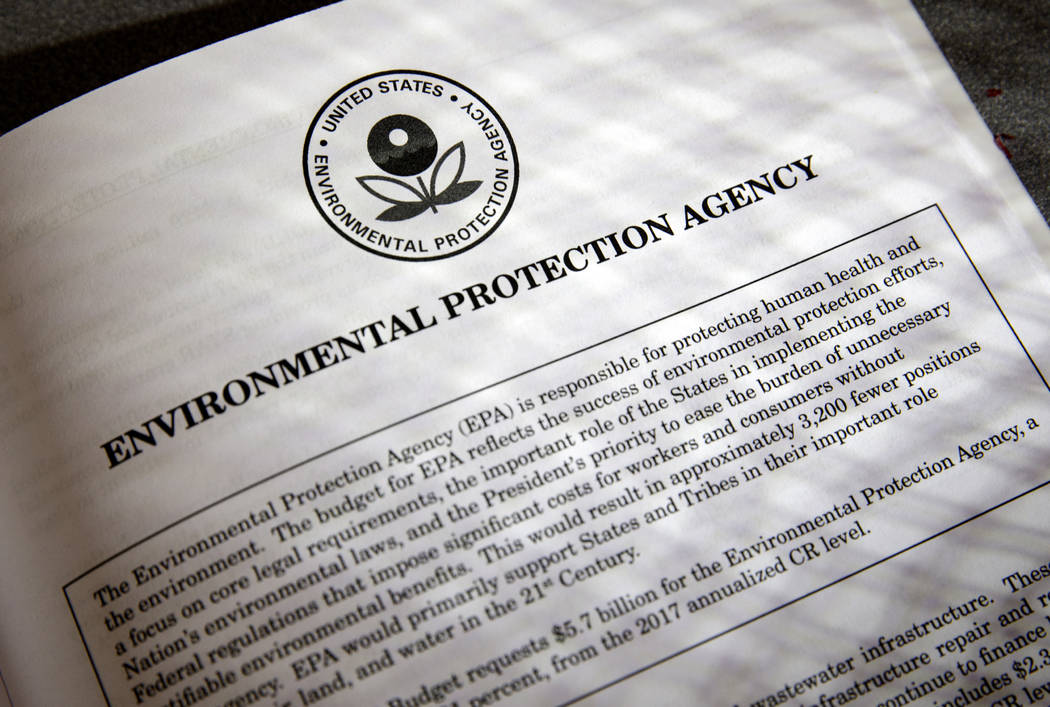 Proposals for the Environmental Protection Agency in President Donald Trump's first budget are displayed at the Government Printing Office in Washington, March 16, 2017. (J. Scott Applewhite/AP)
The Trump administration is moving to roll back the centerpiece of President Barack Obama's efforts to slow global warming, seeking to ease restrictions on greenhouse gas emissions from coal-fired power plants...

In a plan expected to be made public in coming days, the Environmental Protection Agency declared the Obama-era rule exceeded federal law by setting emissions standards that power plants could not reasonably meet. The Associated Press obtained a copy of the 43-page document, which underscored President Donald Trump's bid to revive the struggling coal industry.

The EPA's new proposal would make good on Trump's campaign pledge to unravel Obama's efforts to curb global warming and follows Trump's promise to pull the United States out of the landmark Paris climate agreement. Nearly 200 countries have committed to combat global warming by reducing carbon dioxide and other greenhouse gases that contribute to global warming.

The EPA won't prescribe an immediate replacement to the plan, but will seek public comment on whether to curb climate-warming emissions from coal and natural gas power plants.

A spokeswoman for EPA Administrator Scott Pruitt declined to comment Friday on the authenticity of the leaked document but said the Obama administration "pushed the bounds of their authority so far" that the U.S. Supreme Court issued a stay to prevent the Clean Power Plan from taking effect.

"Any replacement rule that the Trump administration proposes will be done carefully and properly within the confines of the law," EPA spokeswoman Liz Bowman said.

The Obama administration's cost-benefits analysis of the Clean Power Plan was "highly uncertain" in multiple areas, Bowman said, vowing that the Trump administration will present a range of scenarios to the public "in a robust, open and transparent way."

Obama's plan was designed to cut U.S. carbon dioxide emissions to 32 percent below 2005 levels by 2030. The rule dictated specific emission targets for states based on power-plant emissions and gave officials broad latitude to decide how to achieve reductions.

The Supreme Court put the plan on hold last year following a legal challenge by industry and coal-friendly states.

Even so, the plan has been a factor in a wave of retirements of coal-fired plants, which also are being squeezed by lower costs for natural gas and renewable power and state mandates promoting energy conservation.

Repealing the Clean Power Plan without a timeline or a commitment to propose a rule to reduce carbon pollution "isn't a step forward, it's a wholesale retreat from EPA's legal, scientific and moral obligation to address the threats of climate change,'" said former EPA Administrator Gina McCarthy.

While the Supreme Court has concluded that EPA is obligated to regulate greenhouse gases, "this administration has no intention of following the law," said McCarthy, who led the EPA when the Clean Power Plan was completed. "They are denying it just as they are denying the science. They're using stall tactics to defer action, ignoring the courts and the demands of the American people."

Industry groups cheered the planned repeal, saying it would reverse regulatory overreach by Obama and McCarthy.

The Obama-era plan would have sharply reduced the number of coal-fired plants, making the grid more vulnerable to reliability concerns and increasing costs with "trivial environmental benefits," Quinn said.

The new plan will save an estimated 240 million tons of annual coal production and safeguard more than 27,000 mining jobs and almost 100,000 additional jobs throughout the supply chain, he said.

In the leaked document, the Trump administration argues that repealing the Clean Power Plan could spare an estimated $33 billion in compliance costs in 2030, arguing that the Obama administration overstated the rule's potential health benefits.

Previously, the EPA had estimated that by 2030 the Clean Power Plan would prevent 90,000 asthma attacks and up to 3,600 premature deaths a year.

The leaked document casts doubts on those numbers and says the EPA plans to perform updated modeling and analysis of health benefits and other impacts of the rule.

Liz Perera, climate policy director for the Sierra Club, said repealing the Clean Power Plan "is about one thing and one thing only: helping corporate polluters profit."

The plan was first reported by Bloomberg News.