ERA OF CLIMATE SCIENCE DENIAL IS NOT OVER, STUDY FINDS... 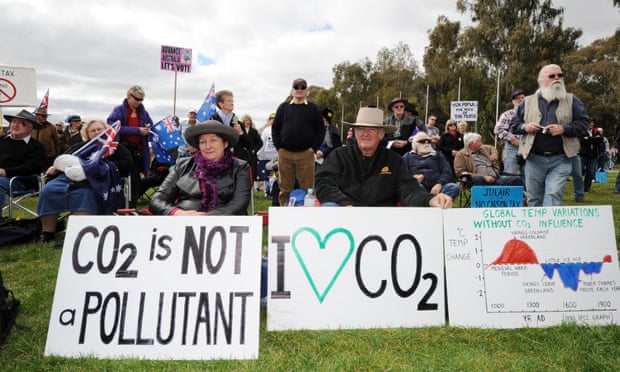 Is the era of climate science denial over? A new study suggests not. Photograph: Torsten Blackwood/AFP/Getty Images

Conservative thinktanks in the US engaging in climate change have increased their attacks on science in recent years, a study of 16,000 documents finds.

After global heat records were continually broken over the last decade, and as sea levels rose and scientists reported the accelerated melting of polar ice sheets, you might be forgiven for thinking the debate over climate change had shifted.

No more arguing over the science? It’s more about the policy now, right?

Well, wrong. At least according to a new study that has looked at 15 years worth of output from 19 conservative “thinktanks” in the United States.

“We find little support for the claim that ‘the era of science denial is over’ - instead, discussion of climate science has generally increased over the sample period,” the study concludes.

The conservative thinktanks under the microscope are the main cog in the machinery of climate science denial across the globe, pushing a constant stream of material into the public domain.

The study, published in the journal Global Environmental Change, analysed more than 16,000 documents published online between 1998 and 2013 by mainly US groups like the Heartland Institute, the Cato Institute and the American Enterprise Institute.

Contrary to some commentators, the study found attacks on science had increased in later years. At the same time, the thinktanks were focusing less on policy issues. 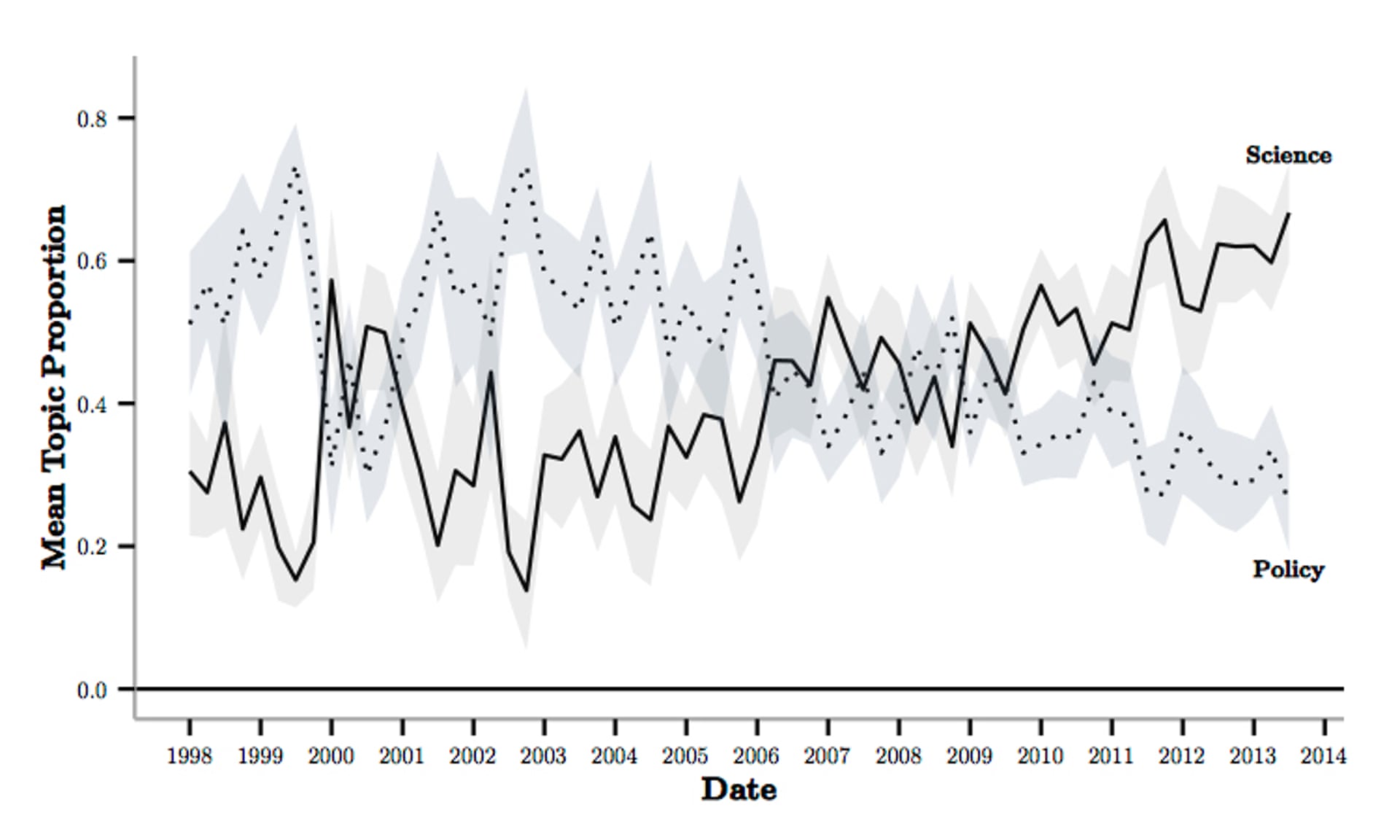 So did the result surprise them? Coan told me:

One the one hand, we were aware that many in both the media and academia believed that science denial was on the decline.

However, this didn’t fit with our casual reading of the skeptical literature and thus a major impetus of the paper was to put this idea to the test.

Though, with that said, we were a bit surprised by the ‘rise’: my prior expectation was that the denial of science and policy, at least on average, has remained relatively constant. This does not appear to be the case.

Not only had the attacks on science increased but thinktanks had also ramped up their climate change output in recent years, the study found.

But was it possible the study’s clear declaration that “the era of climate science denial is not over” might no longer stand, given that the study period ended in August 2013?

After all, since then we have seen the record for the hottest year on record broken twice and, for the first time, more than 190 nations agreeing in Paris to keep global warming to “well below 2C”.

Coan agreed this was “certainly possible”, but “there are also reasons to speculate that the trend has continued.” He said:

We are currently working on a study with John Cook that looks at science and policy related themes (amongst other items) in the top 50 climate skeptic blogs through 2015. The topic structure (i.e. discourse) is very similar, and sometimes identical, to the conservative thinktanks and there is reason to think that these two time series move together. For the blogs, we find that the increase in science-related skepticism continues right through 2015. Again, these results are preliminary, but suggest that the ‘end of science denial’ - at least among these actors - might be wishful thinking.

The study explained these thinktanks “provide a multitude of services to the cause of climate change scepticism”. These included:

Many of the 19 thinktanks analysed in the study have in the past accepted funding from fossil fuel interests, such as oil giant Exxon and the billionaire Koch brothers.

In October 2015 a study in the Proceedings of the National Academy of Sciences (PNAS) found thinktanks that had taken corporate funding from the likes of Exxon and the Kochs were more likely to produce material designed to polarise the climate change issue.

Exxon is currently facing an investigation from the New York attorney general into whether it lied to the public and investors about the risks of human-caused climate change.

Dr Justin Farrell, the author of the PNAS study, told me he was pleased to see more research into conservative thinktanks.

“We are still years away from fully understanding the extent of contrarian influence on climate change politics during the last 20 years,” he said.

The latest study seems to show that thinktanks began to concentrate more on attacking the science in around 2003 but it took until about 2010 for science attacks to overtake policy discussions. But why did this happen?

One possible reason, speculates Coan, is the effect of the 2009 illegal hacking of climate scientist’s emails from a server at the University of East Anglia.

While subsequent investigations found no wrongdoing, conservative thinktanks and commentators ran hard with the “scandal” – and some still do – claiming scientists were part of a grand conspiracy to deceive the world.

Dr Aaron McCright, of Michigan State University, who studies climate science denial, said the rising attacks on science appeared to have coincided with the election of Democrat Barack Obama as US president in late 2008. He said:

The Right no longer controlled the Executive Branch or Congress... at least for the first few years of the Obama Administration.. and thus no longer had as much power inside the government to block climate change policy as they did under George W. Bush. So, they - and a considerable part of industry - ramped up denial activism after 2008 to the high levels we have seen since.

McCright said the “denial machine” had since expanded from think tanks to include bloggers and fake grassroots campaigns and was now “more diverse and seemingly ubiquitous.”

He said conservative think tanks had influenced the public’s understanding of climate change and the way policymakers had reacted to it, in two ways.

First, he said in recent decades US Republicans had used thinktank materials in committee meetings and hearings “to justify inaction on climate change”.

Second, thinktank materials had been taken up as the standard talking points for conservatives.

“Indeed, I would argue that anti-environmentalism - and climate change denial more specifically - has become a central tenet of the current conservative and Republican identity.”

Dr Riley Dunlap, of the Oklahoma State University, and who has partnered with McCright on several influential studies, told me:

While conservative thinktanks were involved in denial from the outset - 1989 at least - we have argued they really moved to the forefront in the late 90s when BP and then other companies pulled out of the industry-led Global Climate Coalition that had arguably been the most powerful force in denial. In fact, the conservative thinktanks were upset that oil companies were ‘caving in’ to the IPCC, and decided to take the lead. This also really shifted the basis of denial from economic self-interest to ideological opposition – the commitment to neoliberalism’s distaste for all government regulations.

McCright added that “knowing what is going on is one thing” but knowing what to do about it was more challenging. I’ll leave you with his thoughts.

Opposing policy is one thing. Undermining, denying, obfuscating, etc. science is another. I wish I had a powerful, simple solution to counter the climate change denial movement, but I don’t. Nevertheless, at the very least, we can continue to drag them from the shadows and into the bright light of day, vigilantly document their activities, and regularly call them out over what they are doing.