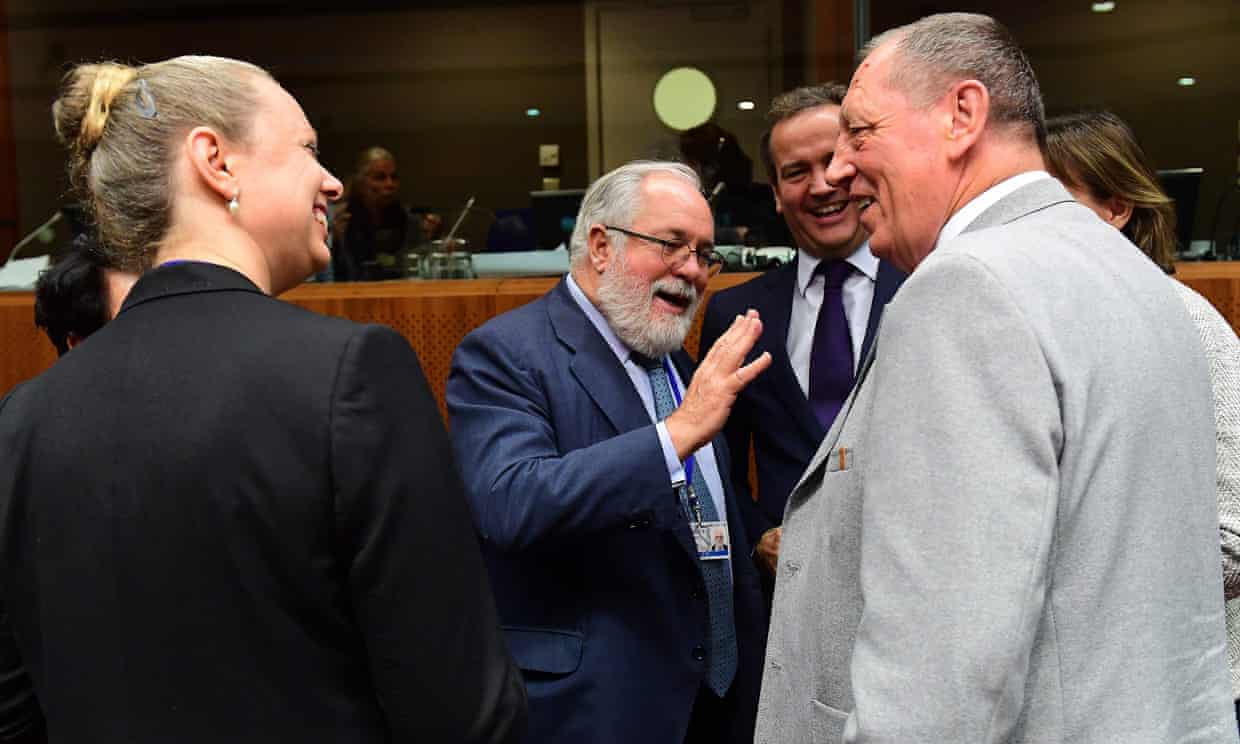 EU ministers are expected to ratify the agreement, along with India and Cananda, next week meaning enough countries will have signed up for the deal to come into legal force...

EU ministers have agreed to ratify the landmark Paris climate agreement at an extraordinary summit in Brussels on Friday, all but guaranteeing that it will pass a legal threshold to take effect next week and sparing the bloc’s blushes in the process.

The European Parliament is expected to rubber stamp the decision in Strasbourg next Tuesday, allowing the EU to sign off on it as soon as the following day.

The EU’s president, Jean-Claude Juncker said: “Today, the EU’s member states decided to make history together and bring closer the entry into force of the first ever universally binding climate change agreement. We must and we can hand over to future generations a world that is more stable, a healthier planet, fairer societies and more prosperous economies.

“This is not a dream. This is a reality and it is within our reach. Today we are closer to it.”

The Paris pact to limit global warming to “well below 2C” will enter into force 30 days after 55 countries, accounting for 55% of the planet’s emissions hand their ratification papers to the offices of Ban Ki-Moon in New York.

India is expected to ratify the deal over the weekend, with Canada next week also likely to join the 61 countries that have so far signed up. The EU’s added weight should then tip the treaty into effect.

The EU’s climate commissioner, Miguel Arias Cañete, said that Europe’s reputation had been “on the line” in the run up to today’s meeting. “We are reaching a critical period for decisive climate action,” he said, “and when the going gets tough, Europe gets going.”

With global CO2 concentrations permanently passing the 400ppm barrier this week and some climate scientists predicting that the Paris deal’s preferred threshold of keeping temperature rises to 1.5C could be broken as soon as 2020, calls for a greater urgency in Brussels have increased of late.

“We cannot miss this opportunity,” Gianni La Via, the European Parliament’s rapporteur on the file, told the Guardian. “A timely EU ratification decision would send a strong signal and highlight the leadership of the EU and its member states.”

The EU was a core member of the “coalition for high ambition” in Paris which pushed a deal through. Ratifying it now will at least allow the bloc speaking and voting rights at a key COP22 summit on its implementation at Marrakesh in November.

EU sources say that 80 or 90 countries have still not ratified the Paris agreement but that a fear of being counted among them focused minds in Brussels.

“We would not have been isolated but in terms of our global leadership it would have been politically embarrassing if we had not been able to show unity at this stage,” the official said.

The speed of today’s extraordinary council decision was hailed as “truly remarkable” by the Energy and Climate Intelligence Unit, a UK-based thinktank which includes MPs, peers and climate scientists on its board.

One spectre haunting the summit though was the prospect of a victory for the climate-sceptic Republican candidate, Donald Trump, in US elections later this year.

EU sources say that the bloc would aim to stick to its climate commitments if that happened. One told the Guardian: “It can’t be indefinite but our initial reaction would be to try to lead others in anticipation that this was a temporary aberration in US politics and that common sense would prevail, whether in four years time or sooner.”

Europe’s own intentions have been clouded for some by resistance from coal-dependant Poland to any review of the EU’s existing climate pledge in 2018. In the Paris deal, this is seen as an opportunity to scale up ambitions towards a 1.5C target.

The EU has not proposed any new climate actions in line with a 1.5C goal, but new legislation on renewables and energy efficiency is expected later this year, to help meet Europe’s existing climate pledges.

Officials believe the measures could have “unpredicted but positive impacts”, helping Europe to go even further than its promised 40% emissions cut for 2030.

Today’s discussions in Brussels were dominated by Polish demands for an effective veto over future climate decisions, such as reforms to the EU’s emissions trading system or national emissions cutting targets.

“They were looking for a change to the treaty basis of EU climate policy that would have required unanimity by all member states,” a source said. “They did not achieve that.”

Some environmentalists are concerned at the lack of deadlines for the EU’s 28 members to individually ratify the Paris deal, or peak their emissions. These are currently forecast to continue rising until 2030 in some countries.

Wendel Trio, the director of Climate Action Network Europe complained of “a certain level of hypocrisy” in calls from Brussels for other countries to implement the Paris deal’s tenets.

“We can no longer follow the myth that the EU is acting alone or that it is a leader,” he said. “This ratification process shows that the EU is actually running behind [other countries]. It is important for the EU to know that they need to adapt to this new era of climate action, get their act together and improve their climate policies rather than think they can continue on a business as usual trajectory.”

Several EU countries have formaly signed off on the Paris deal to date, including France, Germany, Hungary, Slovakia, Portugal and Austria.

Theresa May has promised to ratify the agreement by the end of this year.