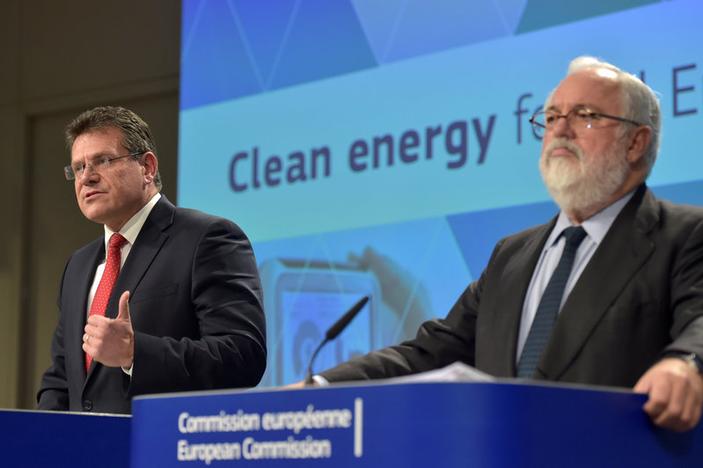 European Commission Vice-President Maros Sefcovic and Commissioner Miguel Arias Canete hold a news conference on Clean Energy package in Brussels, Belgium November 30, 2016. REUTERS/Eric Vidal
EU regulators set a path on Wednesday for renewables to power half of Europe by 2030, with plans to cut energy use, phase out subsidies for coal and enforce greater cross-border trade...

The European Commission's 1,000-page reform seeks to meet goals on cutting emissions and adapt Europe's grid to digital technologies and fitful wind and solar power that is transforming industry and challenging utilities.

It sets Brussels on a collision course with governments that want to insure against black-outs by subsidizing conventional power and maintain sovereignty over pricing and grid operation.

Facing a crisis of confidence over Britain's vote to leave the bloc, the EU executive is seeking to champion consumer rights, pledging to lower prices, streamline billing and remove barriers for them to sell electricity from sources such as solar panels.

"Today there is not enough flexibility, the price signals are not working," Commission Vice President Maros Sefcovic said.

"The consumers are coming last in the line."

While wholesale power prices have dropped, bills across the bloc rose by some 3 percent a year since 2008, EU data shows.

Many EU nations are stuck, Sefcovic said, due to vested interests struggling to adapt to new competitors and the bloc's climate pledge to cut emissions by 40 percent by 2030.

Poland objected to provisions that could threaten its coal-mining industry on Wednesday, while Germany criticized a lack of support for wind and solar power.

The bill sees governments ceding power to the EU's energy regulatory agency ACER to rule on disputes over the shape of single-price trading zones like that which covers joint German-Austrian power markets.

Local grid operators have voiced their own doubts over obligations for greater regional cooperation.

In an effort to reduce dependence on imports of fossil fuel from Russia, the EU executive set a binding target to cut energy use by 30 percent by 2030, mostly by refurbishing buildings that suck up some 40 percent of Europe's energy.

But the move falls short of a call by European Parliament for a 40 percent reduction.

The proposal - still to be approved by member states and Parliament - also takes aim at market distortions and subsidies for fossil fuels by setting stricter limits on support schemes for reserve power, known as capacity mechanisms.

They would have to be open across borders and to innovative providers who offer capacity via schemes that pay firms to ramp down consumption in so-called demand-side response.

The bill attaches a limit of 550 grams of carbon dioxide per kilowatt-hour to capacity mechanism for new plants from 2021 - ruling out their use for inefficient coal-fired stations.

Existing plants will only have to comply with the measure from 2026 - drawing protests from Greenpeace, which said it gave a free pass for Europe's 280 old, coal-fired plants.

At issue are plans to scale back the right of renewable energy producers to be the first to sell into the grid for new projects in EU nations such as Germany where renewables already make up a large share of the power mix.

In a move to allay concerns that changes could stifle investment, the bill maintains "priority dispatch" for existing assets. Europe's wind lobby called it "more good than bad".

The most vocal critics were farmers of crops used in biofuels, with French producers calling it a "death sentence".

The draft law caps their share of fuels used in transport to 3.8 percent in 2030 - halved from 2020's target - envisaging instead electrification of transport and advanced biofuels from agriculture or forestry industry waste reaching 6.8 percent.

The Commission took a policy U-turn away from crop-based biofuels over criticism the same land was better used for food.

But climate activists warn the plan does not do enough to ward off deforestation.

(Additional reporting by Robert-Jan Bartunek in Brussels and Vera Eckert in Berlin; editing by Susan Thomas and Alexandra Hudson)