EVEN IF TRUMP'S EPA GOES AWOL, CORPORATE AMERICA CAN ENABLE US TO REACH PARIS GOALS... 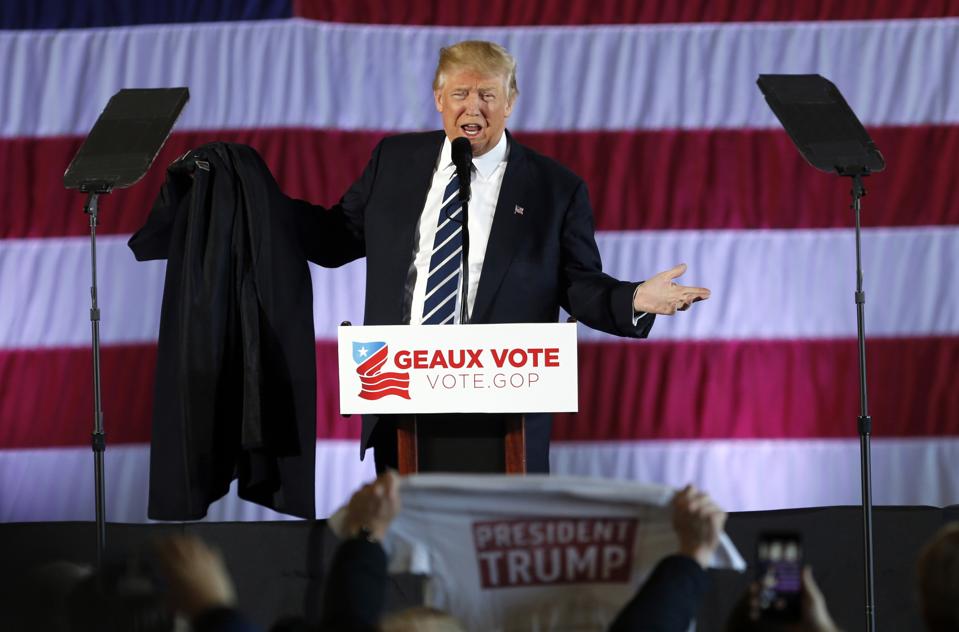 President-elect Donald Trump speaks at rally in Baton Rouge, La. When it comes to climate change, Trump is sending mixed signals on whether or how he will try to slow the Earth’s warming temperatures and rising sea levels. (AP Photo/Gerald Herbert, File)

With Inauguration Day a month away, business leaders are trying to grasp what the Trump Era will mean for them. Some, like the prominent tech executives who traveled to Trump Tower December 14, are doing their best to charm, and be charmed by, the President-elect. Others, like the Boeing executives who fell victim to a Trump Twitter storm after making some public comments in support of free trade, are learning that speaking out can be risky...

I hope they’ll keep making themselves heard. Business has a powerful voice that the President-elect genuinely respects, so it’s critically important that corporate leaders continue to engage publicly – especially on issues where the new administration’s plans could dramatically increase risk to business and society alike.

One such area is solutions to climate change. As the Trump Administration pulls back on federal action, U.S. business will have an even more important leadership role to play in the fight for a cleaner, safer world. And I am optimistic that American business leaders are up to this challenge.

Executives aren’t blind to the mounting scientific evidence of the impacts of climate change. They clearly see growing risks to their facilities, operations, and supply chains from rising seas, more powerful storms, and more extreme droughts and floods. At the same time, they understand that both market trends and global policies are accelerating a transition to a clean energy future—creating huge and profitable opportunities for innovative companies. A new report from an influential business group, the Risky Business Project, makes a compelling case that a low-carbon economy and a safer climate are well within our grasp, both technologically and economically. But it also warns that companies and countries that don’t lead in the transition risk losing out in the coming global competition.

Our business leaders understand this. And the world is watching to see what they do.

I don’t mean that rhetorically. Last week, I was the only American at the table of global environmental leaders invited by the Chinese government to advise on environmental policy.

I wasn’t surprised by the question everyone had for me: What happens now in the fight against climate change?

It’s a question that became even more urgent when Donald Trump nominated Scott Pruitt, the Oklahoma attorney general who has sued to block President Barack Obama’s plan to cut carbon emissions from powerplants, to head the U.S. Environmental Protection Agency.

My answer is that the climate story in the U.S. is far bigger than just the actions of the federal government. Yes, what happens in Washington is crucially important. And the recent election was a blow to all of us who have been working to protect the environment and the planet.

But as I told my colleagues in China, Trump and his team can’t roll back the progress that’s already being made all across America. We see that progress in the many states that have become leaders on clean energy and are already on track to meet their share of the emissions reductions required both in Obama’s Clean Power Plan and in the international Paris Climate agreement.

Perhaps even more significant, we see that progress in America business. Google just announced that it will be completely powered by renewable energy in 2017. Pork producer Smithfield promised to reduce its carbon emissions by 25% in the next eight years. Retail giant Walmart roared past its 2010 goal of cutting its greenhouse gas emissions by 20 million tons by 2015—and now aims to slash emissions across its operations and supply chain by 1 gigaton by 2030. That’s more than the annual carbon emissions of Germany.

Those examples just scratch the surface. Aggressive commitments have been made by scores of companies, from Staples and Levi Strauss to Monsanto, Coca Cola, General Mills, and Kellogg.

Moreover, hundreds of U.S. companies and investors signed on to a letter to Trump and others to “reaffirm our deep commitment to addressing climate change through the implementation of the historic Paris Climate Agreement” and to push for a future U.S. economy that is “energy efficient and powered by low-carbon energy.”

Some question the motives of the companies making such commitments. Environmental Defense Fund works with corporate partners, holds them to high standards, and, to keep our voice strong, doesn’t accept funding from them. We have seen responsibility for corporate sustainability move from CMO’s office to the COO – because the most compelling reason for cutting emissions, boosting energy efficiency, and switching to clean energy is the corporate bottom line.

So when Scott Pruitt, if approved by the Senate, takes aim at what he claims are “job-killing” environmental and climate standards, he may be surprised by the pushback from the business community. Companies see more opportunities and more jobs from those policies, not fewer.

Companies can do more than just oppose bad ideas. They can take even more aggressive action to reduce their own carbon emissions, enabling the U.S. to meet its Paris commitments no matter what the federal government does.

They can grow their own clean energy businesses, from creating innovative new smart grid or electric car technology to investing in solar power installations in India or Africa.

And they can push harder, at every level of government, for sensible market-based policies that encourage innovation and accelerate the transition to cleaner energy. Including the true costs of carbon emissions in the price of fossil fuels through a carbon tax or other price on carbon, for example, has been endorsed by an overwhelming majority of economists, by major U.S. banks, and by Trump’s choice for Secretary of State, ExxonMobil CEO Rex Tillerson.

With Donald Trump taking office, such a policy may seem a long way off. But political reality can turn on a dime – especially when the American business raises its voice.