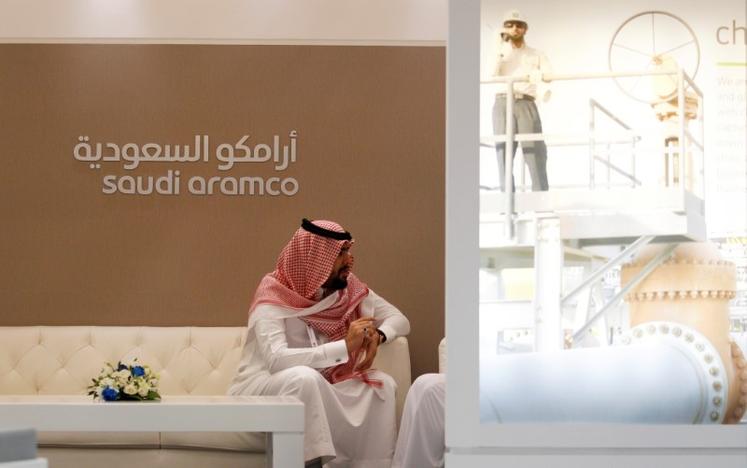 A Saudi Aramco employee sits in the area of its stand at the Middle East Petrotech 2016, an exhibition and conference for the refining and petrochemical industries, in Manama, Bahrain, September 27, 2016. REUTERS/Hamad I Mohammed - RTSPMKF
Top oil companies including Saudi Aramco and Shell are joining forces to create an investment fund to develop technologies to promote renewable energy, as they seek an active role in the fight against global warming, sources said...

The chief executives of seven oil and gas companies -- BP, Eni, Repsol, Saudi Aramco, Royal Dutch Shell, Statoil and Total -- will announce details of the fund and other steps to reduce greenhouse gases in London on Friday.

The sector faces mounting pressure to take an active role in the fight against global warming, and Friday's event will coincide with the formal entry into force of the 2015 Paris Agreement to phase out man-made greenhouse gases in the second half of the century.

The group is part of the Oil and Gas Climate Initiative (OGCI), which was created with the backing of the United Nations in 2014 and includes 11 companies representing 20 percent of global oil and gas production.

The company leaders are expected to detail plans to create an investment vehicle that will focus on developing technologies to lower emissions and increase car engine and fuel efficiency, according to the sources involved in the talks who declined to be named.

The size and structure of the fund were unclear.

The fund will also focus on ways to reduce costs of carbon capture and storage (CCS) technology, which involves capturing carbon dioxide emissions produced from fossil fuel burning plants and re-injecting them into underground caverns.

The CEOs are also expected to announce the next phase of their plan to reduce the oil sector's emissions, primarily by reducing flaring of excess gas at fields, increasing the use of CCS and limiting the release of methane, a highly polluting gas often emitted through pipe leaks.

OGCI leaders called on governments last year to set a price on carbon emissions to encourage the use of cleaner technologies, although some companies including Exxon Mobil have resisted the idea.

They now hope to show they can play an active role.

The drive to limit global warming to 1.5 degrees Celsius by the end of the century poses a threat to oil and gas companies as transport and power sectors gradually shift towards renewable sources of energy such as solar and wind.

Oil majors including Norway's Statoil, France's Total and Italy's Eni, have increased their investments in renewable energy in recent years, although it is still dwarfed by the main fossil fuel business.

Oil producers have also lobbied for the phasing out of coal in favor of the less pollutant natural gas in the power sector.

Delegates from signatory nations meet in the Moroccan city of Marrakesh on Nov. 7-18 to start turning their many promises into action and draw up a "rule book" for the sometimes fuzzily worded Paris Agreement on climate change, reached last December.