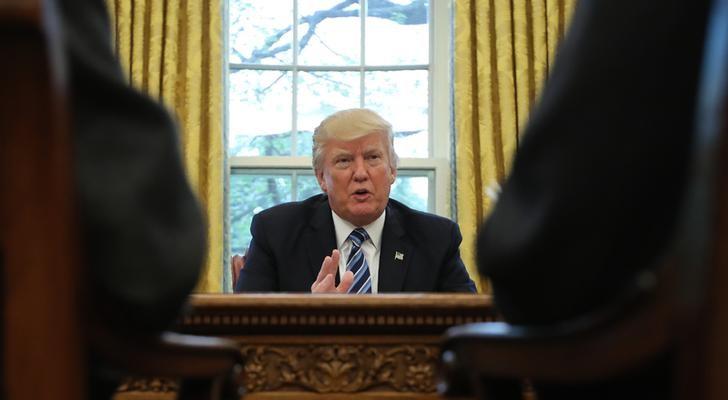 U.S. President Donald Trump speaks during an interview with Reuters in the Oval Office of the White House in Washington, U.S., April 27, 2017. REUTERS/Carlos Barria

President Donald Trump complained on Thursday that the United States was being unfairly treated in the Paris Climate Agreement and told Reuters he would announce a decision in about two weeks on whether Washington would remain in the accord...

The Republican Trump, elected in November, had vowed during his campaign to withdraw from the Paris accord within 100 days of becoming president, part of a broader plan to sweep away Obama administration environmental protections he said were hobbling the economy.

He has since said he is open to staying in the pact if Washington gets better terms, and scores of large U.S. companies and several Republican lawmakers have urged him to stay in the deal as a way to protect American industry interests overseas.

Trump, who will mark the 100th day of his presidency on Saturday, told Reuters in an interview he would announce his decision "in about two weeks," but complained that China, India, Russia and other countries were paying too little to help poorer countries battle climate change under the agreement's Green Climate Fund.

"It's not a fair situation because they are paying virtually nothing and we are paying massive amounts of money," he said.

Asked for a hint of what his decision might be, he said: "I can say this, we want to be treated fairly."

An administration source told Reuters earlier that Trump administration officials would likely meet in May to decide whether to keep the United States in the climate deal, having had an initial meeting on Thursday at the White House.

The group of advisers, which includes Secretary of State Rex Tillerson, Energy Secretary Rick Perry and national security adviser H.R. McMaster, was on track to make the decision before a Group of Seven summit on May 26, the source said.

Tillerson, the former head of Exxon Mobil Corp, and Perry have said the country should remain in the agreement. McMaster shares that view, a source outside the administration said.

Many companies such as BP Plc and Microsoft Corp have urged the United States to stay in the agreement to protect their competitiveness.

A group of nine Republican lawmakers on Thursday urged Trump to stick to the pact, but to weaken the U.S. pledge to cut greenhouse gas emissions.

Congressman Kevin Cramer of oil-producing state North Dakota and eight other Republicans in the House of Representatives sent a letter to Trump urging him to use the country's "seat at the Paris table to defend and promote our commercial interest, including our manufacturing and fossil fuel sectors."

If the United States is to stay in the 2015 agreement, Washington should present a new emissions cutting pledge that "does no harm to our economy," said the letter from Cramer, who advised Trump on energy and climate during his 2016 presidential campaign.

The Republican lawmakers also said Washington should retain its seat on the Green Climate Fund but not make additional transfers to it. Obama pledged $3 billion to the fund in 2014, and gave $1 billion to it, with the last $500 million payment coming in his last days as president.