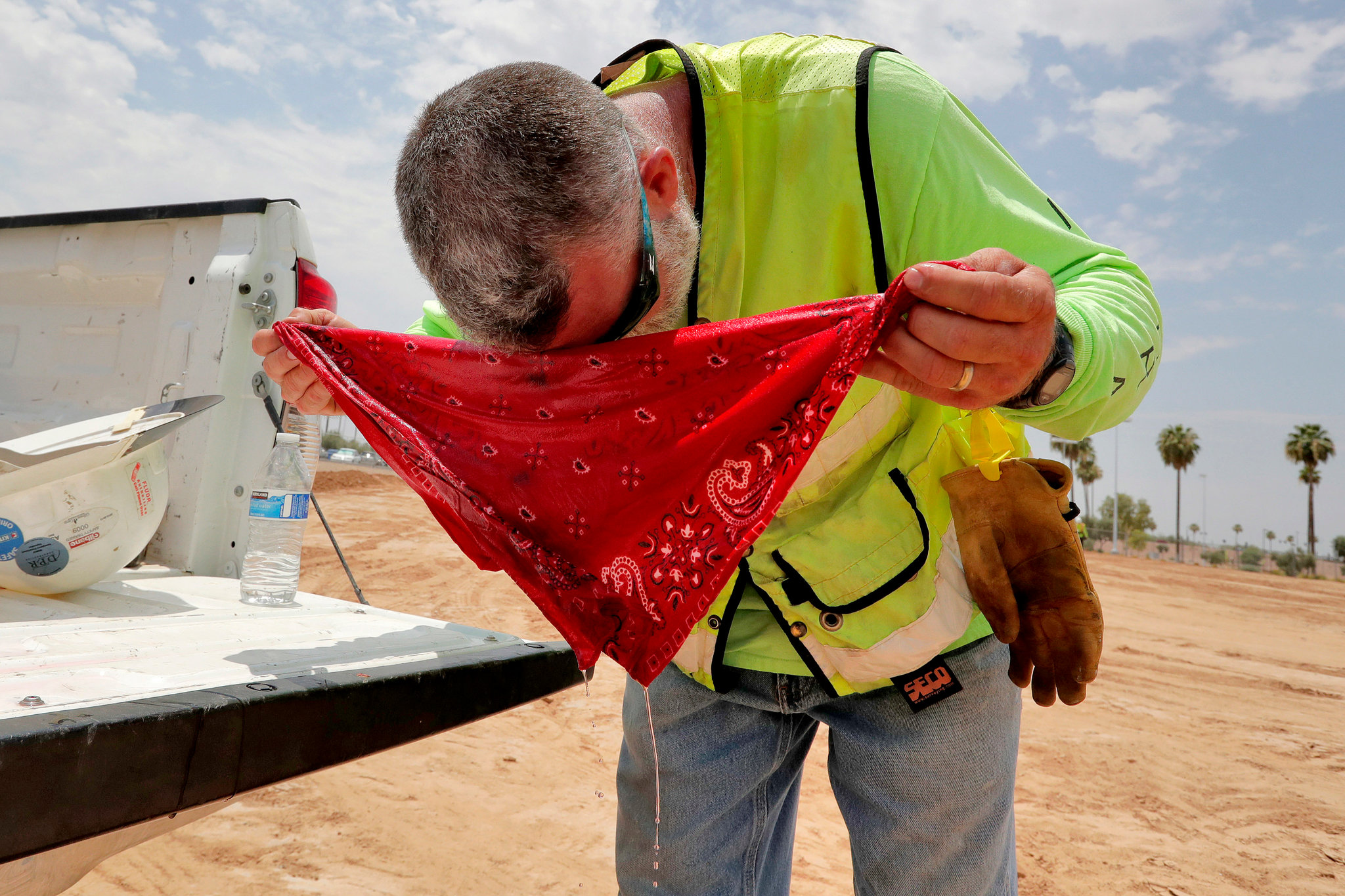 Dana Wheeler, a civil engineer with Integra Engineering, wrapping a wet headband around his head to combat the heat in Tempe.CreditMatt York/Associated Press

A spike in temperature across the Southwest has left many in Arizona gasping for breath...

An excessive heat warning from the state’s Department of Health Services remained in effect for over a dozen counties on Sunday, with temperatures of up to 120 degrees expected to last through Monday in La Paz, Maricopa and Mohave Counties.

According to the state, excessive natural heat killed close to 1,300 people from 2005 to 2015. In 2016, 130 people died of heat-related causes in Maricopa, the southern county that contains Phoenix and is home to more than four million people. 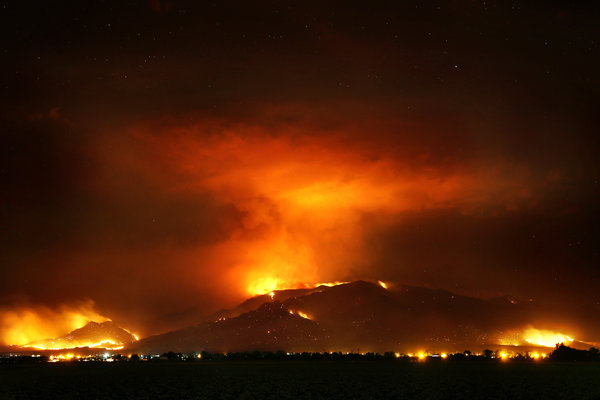 The Frye Fire burned the western edge of the Pinaleño Mountains near Willcox, Ariz., on Thursday.CreditKelly Presnell/Arizona Daily Star, via Associated Press

The high temperatures have contributed to other extreme weather events, like wildfires. On Friday, Gov. Doug Ducey declared a state of emergency and requested that additional resources be directed to those fighting the fires. According to a statement from the governor’s office, the state has experienced more than a dozen large wildfires since April, which have been “aided by high temperatures, winds and available fuels.” 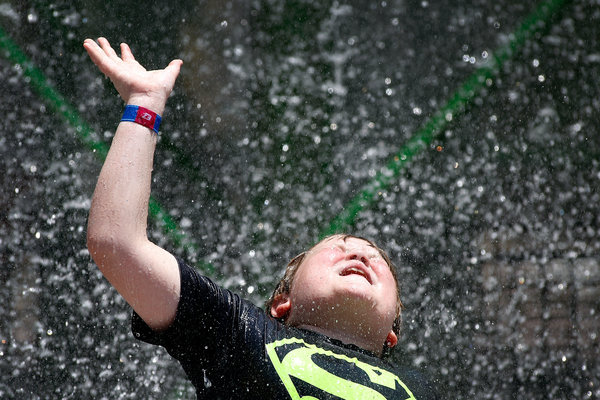 Connor Federle finding some relief from the heat at a water park in Phoenix.CreditRalph Freso/Getty Images

On Friday, officers with the Pinal County sheriff’s office were called to respond to the deaths of two elderly people in Apache Junction. According to Navideh Forghani, a spokeswoman for the sheriff’s department, early evidence suggested that the deaths had been caused by the high temperatures. Ms. Forghani added that an air-conditioning unit in the home had been malfunctioning. 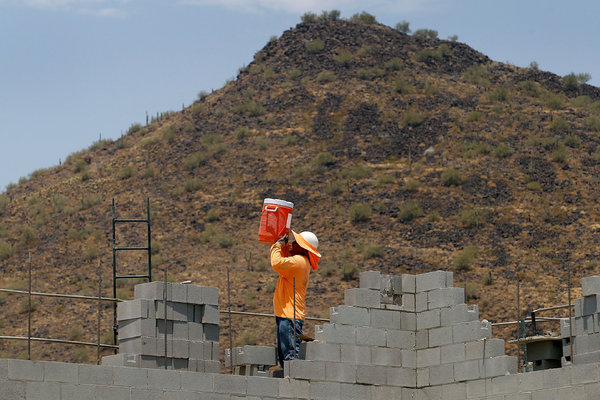 A construction worker at a job site in Phoenix.CreditRalph Freso/Getty Images

Dr. Moneesh Bhow, the medical director of the emergency department at Banner University Medical Center in Phoenix, said the increase in patients suffering from heat-related illnesses was notable.

“We’ve seen a spike, especially this past week,” he said. “The illness spectrum ranges from minor stuff from heat-related rashes to more significant illnesses like a heat stroke.”

He said the center had not yet seen any deaths from the heat, and advised residents who were forced to be outside to stay hydrated, to wear light-colored, loose clothing and to avoid overexerting themselves.

“If you’ve ever opened an oven and put your head down to pull something out and that gush of hot air that just hits you,” he said. “That’s what it feels like — like walking into an oven.” 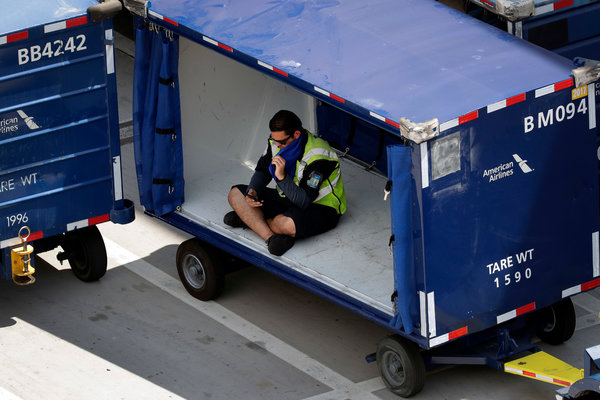 The heat has led to dozens of flight cancellations at Phoenix’s Sky Harbor International Airport in the past week, leaving passengers who were scheduled to depart the city on smaller aircraft stranded. More than 350 flights were potentially affected.

The retractable roof at Chase Field, home of the Arizona Diamondbacks baseball team, was closed on Saturday during a game against the Philadelphia Phillies, but that did not prevent the heat from infiltrating the ballpark. In response to a fan’s complaint, the team reported that leaks in its cooling and air-conditioning system caused partly by the heat had made it hotter than usual inside the stadium. 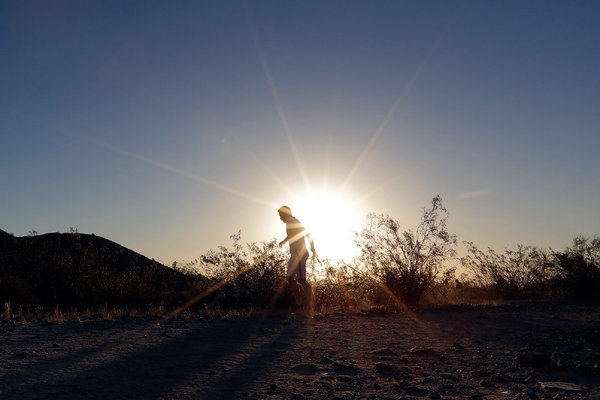 A jogger in South Mountain Park exercising at sunrise to avoid the excessive heat in Phoenix. CreditMatt York/Associated Press

David Sailor, a professor at Arizona State University and the director of its Urban Climate Research Center, said that such heat waves were to be expected in the summer, but that climate change amplified such spikes in temperature.

“The science is showing that the likelihood and the magnitude of these heat waves is likely to be exacerbated by climate change,” he said.

He also emphasized the connection between what he called “global drivers of local weather” and the weather itself.

“When you have these heat waves, the residents in the area of course are using more air-conditioning than they would otherwise,” he said. “So there’s a lot more waste heat being dumped into the environment from their attempts to keep their buildings cool. That creates akind of positive feedback loop between local heat and global climate change.” 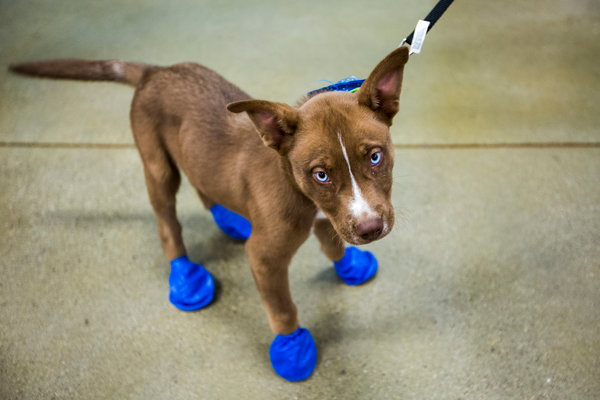 A Facebook video made this month by a Tempe resident, Alix Loar, that provides a more lighthearted take on the heat has been viewed more than 100,000 times.

In the video, Ms. Loar announces that it “is officially mitten season here in Arizona.”

“Not because cooler temperatures are on the horizon or because snowfall is in our near and/or very distant future,” she continues. “But so that I can grab my steering wheel without having to check myself into a burn unit.”