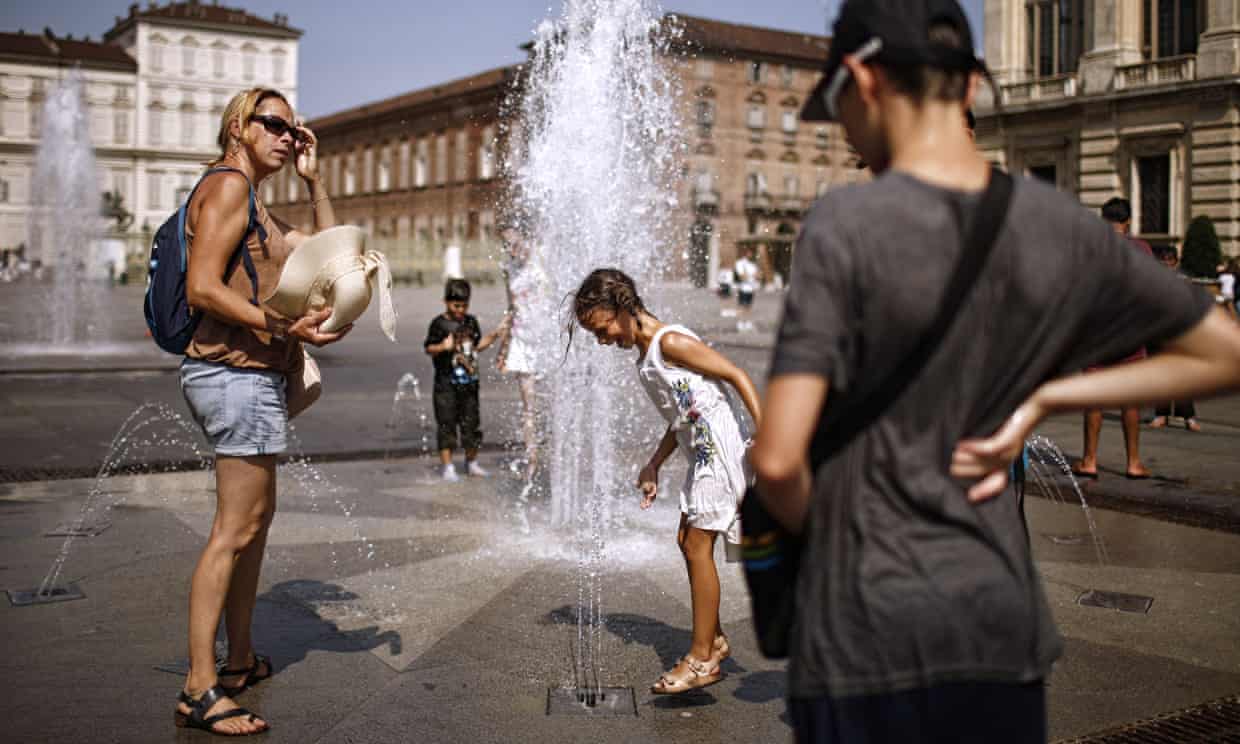 People refresh themselves in a fountain at Piazza Castello in Turin, Italy. Photograph: Marco Bertorello/AFP/Getty Images

Authorities in 11 countries warn residents and tourists to take precautions amid region’s most intense heatwave – nicknamed Lucifer – since 2003...

(Job One Editors Note: Lucifer? Let's take this out of the "Spritual Realm" and lay the blame where the blame is due! God has nothing to do with this!  Mans greed and apathy is at the helm of this ships course!)

leven southern and central European countries have issued extreme heat warnings amid a brutal heatwave nicknamed Lucifer, with residents and tourists urged to take precautions and scientists warning worse could be still to come.

Authorities in countries including Italy, Switzerland, Hungary, Poland, Romania, Bosnia, Croatia and Serbia are on red alert, the European forecasters’ network Meteoalarm said, and swaths of southern Spain and France are on amber.

As temperatures in many places hit or exceeded 40C (104F) in the region’s most sustained heatwave since 2003, emergency services are being put on standby and people have been asked to “remain vigilant”, stay indoors, avoid long journeys, drink enough fluids and listen for emergency advice from health officials.

At least two people have died from the heat, one in Romania and one in Poland, and many more taken to hospital suffering from sunstroke and other heat-related conditions. Italy said its hospitalisation rate was 15% above normal and asked people in affected regions only to travel if their journey was essential. Polish officials warned of possible infrastructure failures.

A spokeswoman for Abta, the UK travel trade organisation, reinforced the advice for holidaymakers, saying they should take sensible precautions, keep hydrated by drinking plenty of water, stay out of the sun in the middle of the day, and follow any advice issued by health authorities in specific destinations. 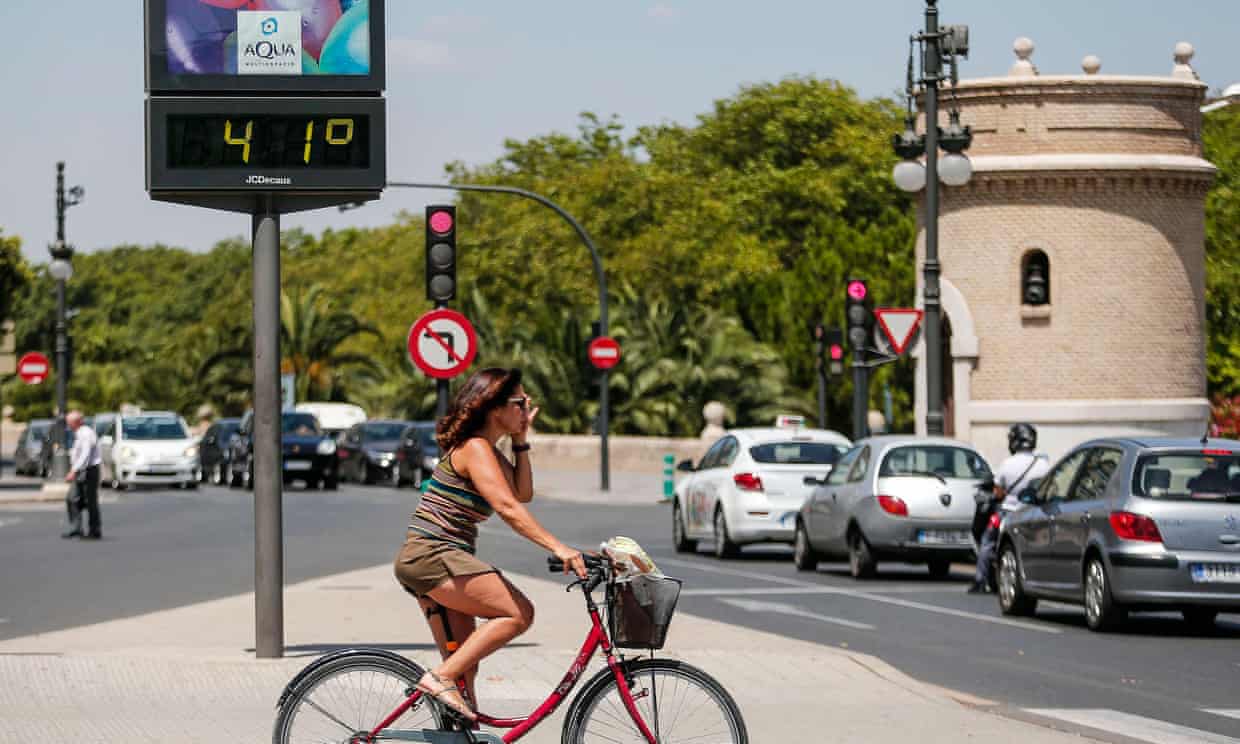 A cyclist waits to cross a road next to a thermometer showing 41C in Valencia, eastern Spain. Photograph: Manuel Bruque/EPA

The heatwave, now in its fourth day and expected to last until next Wednesday, follows an earlier spell of extreme temperatures last month that fuelled a spate of major wildfires, exacerbated droughts in Italy and Spain, and damaged crops.

The highest temperature on Thursday was 42C in Cordoba, Spain, and Catania, Italy. Split in Croatia also hit 42.3C on Wednesday. The spell is forecast to peak at the weekend with temperatures of 46C or higher in Italy and parts of the Balkans.

Authorities in Italy, which is suffering its worst drought in 60 years, have placed 26 cities on the maximum extreme heat alert, including Venice and Rome. Many of Rome’s fountains have been turned off, and last week the city only narrowly averted drastic water rationing.

In Florence, the Uffizi art gallery was temporarily closed on Friday when the air-conditioning system broke down. In Hungary, keepers at Budapest zoo cooled down two overheating polar bears with huge ice blocks.

Temperatures along parts of Croatia’s Adriatic coast, including Dubrovnik, were expected to hit 42C during the day. In the Serbian capital of Belgrade there were reports of people fainting from heat exhaustion.

Highs in Spain, including in popular holiday resorts on the Costa del Sol and on the island of Majorca, are set to reach 43C this weekend, with extreme conditions also forecast in Seville, Malaga and Granada. Ibiza and Mallorca could hit 42C, Spain’s Aemet meteorological service warned.

While Europe’s record high is 48C, set in Athens in 1977, current temperatures are in many places as much as 10-15C higher than normal for the time of year and likely to result in more fatalities, experts have said.

Europe’s record-breaking 2003 heatwave resulted in more than 20,000 heat-related deaths, mainly of old and vulnerable people, including 15,000 in France, where temporary mortuaries were set up in refrigerated lorries.

Such spells of extreme heat in southern Europe could be a foretaste of things to come. French researchers last month predicted summer conditions in some of the continent’s popular tourist destinations could become significantly tougher. 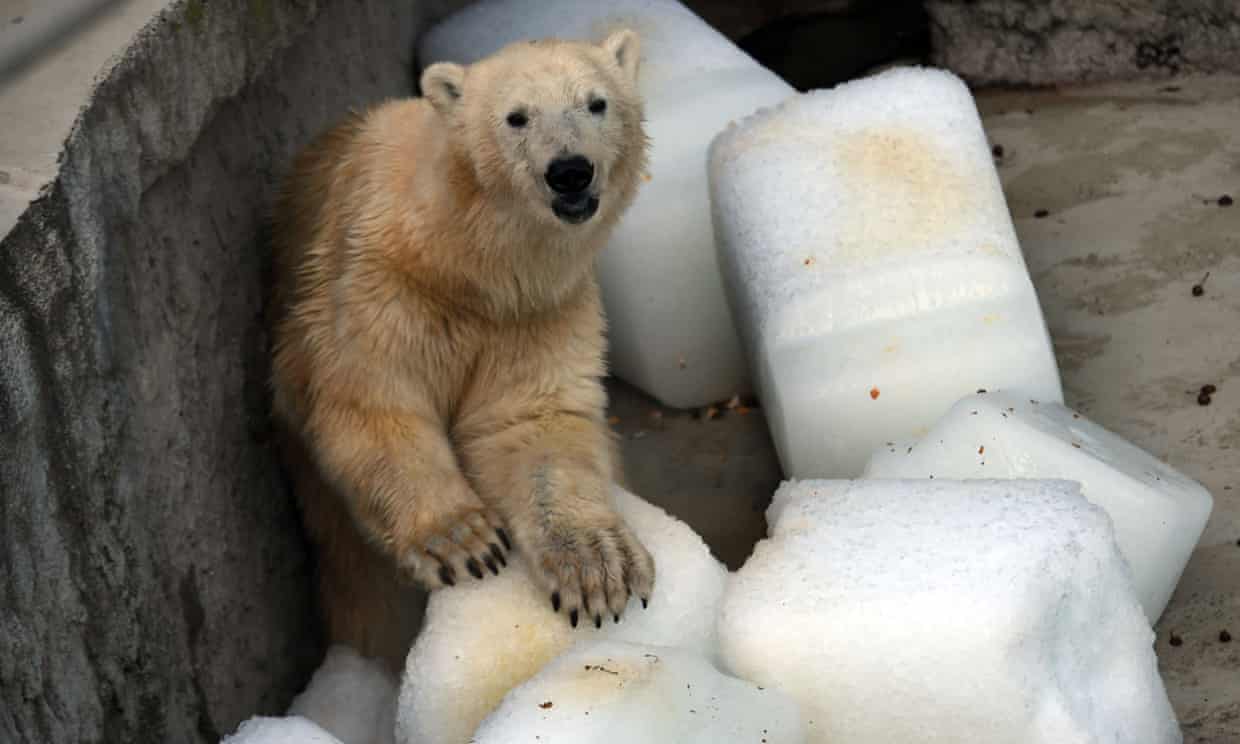 Szeriy, a polar bear at Budapest zoo, has been given blocks of ice to combat the heat. Photograph: Attila Kisbenedek/AFP/Getty Images

Writing in the journal Environmental Research Letters, the scientists said if a similar “mega-heatwave” to that of 2003 were to occur at the end of the century, when average temperatures are widely expected to be noticeably higher after decades of global warming, temperatures could pass 50C.

The researchers noted that climate models suggest “human influence is expected to significantly increase the frequency, duration and intensity of heatwaves in Europe” and said their modelling suggested that by 2100, peak summer temperatures could rise by between 6C and 13C against historical records.

The village of Conqueyrac in the Gard department of France hit 44.1C on two occasions in the summer of 2003, the highest temperature ever recorded in the country, meaning “the record maximum value could easily exceed 50C by the end of the 21st century”, the scientists concluded.

The current extreme temperatures, coupled with strong winds, have fanned wildfires that have already caused more than 60 deaths this summer in Portugal and caused widespread damage in southern France, Greece and Italy.

About 300 firefighters and military personnel were fighting 75 wildfires on Friday in Albania, with firefighters also busy in Serbia, Bosnia, Macedonia, Croatia, Greece and the French island of Corsica. 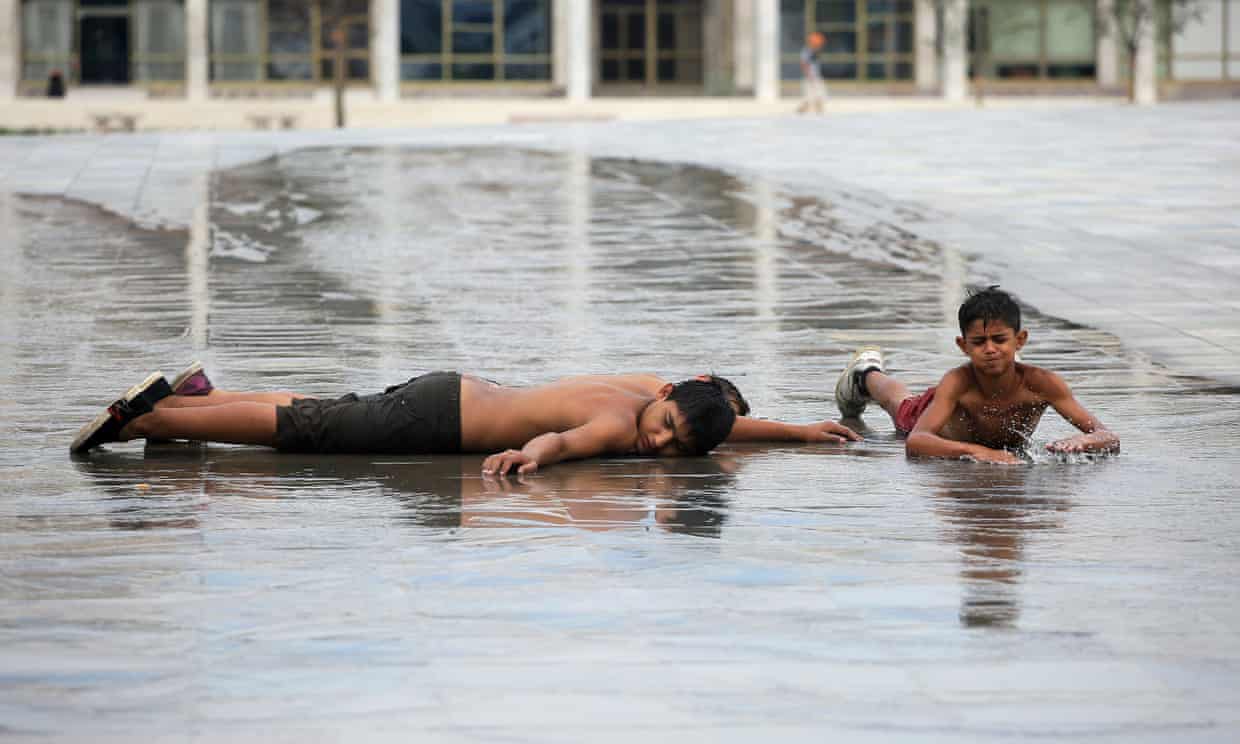 Children cool off in water on a square in Tirana, Albania. Photograph: Malton Dibra/EPA

In Italy, fires killed a 79-year-old woman in the central Abruzzo region and forced the closure of the main Via Aurelia coastal motorway that runs northwards from Rome to the Italian Riviera.

The country’s winemakers have started harvesting their grapes weeks earlier than usual due to the heat. The founder of the Slow Food movement, Carlo Petrini, said no harvest in living memory had begun before 15 August.

The heatwave is likely to cost Italy’s agricultural sector billions of euros, with as many as 11 regions facing critical water shortages. Olive yields in some areas are forecast to be down 50% and some milk production has fallen by up to 30%.

Bosnian officials said the heatwave and drought had nearly halved agricultural output, which represents 10% of the country’s economic output, and Serbia said its corn production could be cut a third.