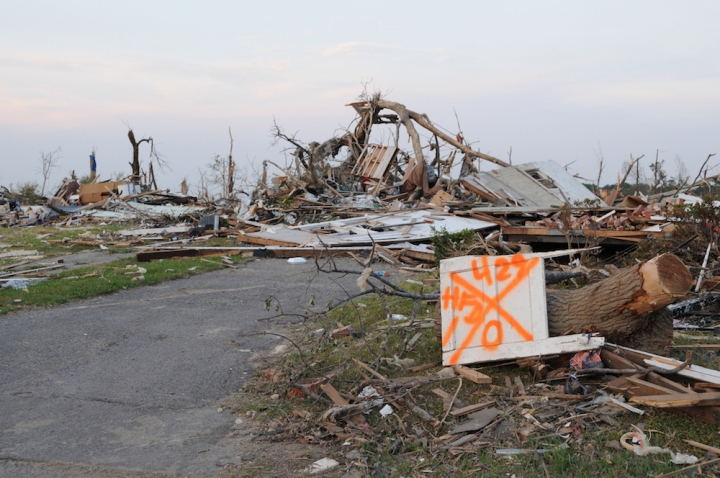 The remnants of a home destroyed by one of the many tornadoes that raked across Alabama during the April 2011 Super Outbreak. Credit: FEMA Photo by George Armstrong

Outbreaks of tornadoes — where multiple tornadoes form over an area in just a few hours or days — are responsible for most of the devastating destruction caused by severe weather, and a new analysis has reached a worrying conclusion about the worst of these outbreaks...

Outbreaks with many tornadoes are becoming more extreme, particularly the very worst outbreaks, according to a study published Thursday in the journal Science. When researchers looked into what might be causing the trend — and whether it could be linked to expected changes in storm environments due to climate change — they found the opposite of what they expected, pointing to the need for more research on the matter.

"This study raises new questions about what climate change will do to severe thunderstorms and what is responsible for recent trends," study co-author Michael Tippett, a Columbia University professor, said in a statement.

If climate change is causing these trends, they could be expected to continue into the future, but if natural climate cycles are at play, that could mean a return to earlier levels of tornado activity.

Previous research examining the record of reported tornadoes going back to 1954 had found that the numbers of days that saw tornadoes was decreasing, but that there were more tornadoes on the days that did see them. Tippett likened this trend to a gambler betting the same amount of money, but on fewer bets, “so either they win big or they lose big.”

The new research is a natural outgrowth of this earlier finding, though Tippett and his fellow Columbia-affiliated researchers, Chiara Lepore and Joel Cohen, drilled further down into the data.

Using a particular method of statistical analysis, they examined how the number of the most extreme outbreaks had changed over the course of the records. They defined an extreme outbreak as one that had at least 12 or more tornadoes ranking at least an F1 or EF1 on the old Fujita scale and the Enhanced Fujita scale that replaced it. The scale goes from 0 to 5, with 5 being the most damaging.

They found that not only were these extreme outbreaks occurring more frequently, but that the more extreme the outbreak — meaning ones that spawned the highest number of twisters — the faster that occurrence was rising.

Their analysis showed that an outbreak that would have a 20 percent chance of occurring in any given year had about 40 tornadoes in 1965, but that by 2015, that number had doubled to 80.

Other research has suggested that the observed trends in tornado activity could be linked to climate change because of the impacts warming is expected to have on the environment that feeds the severe storms that spawn tornadoes.

Why some storms produce tornadoes but others don’t still isn’t fully understood, but two components are essential: an unstable atmosphere, which promotes the convection that drives severe storms, and wind shear, or changes in wind speed and direction at different levels of the atmosphere, which helps create a tornado’s rotation.

Climate models have suggested that instability should increase with warming, because of the excess water vapor a warmer atmosphere can hold, but that wind shear should decrease. The increase in instability was seen to win out, though, suggesting it could be behind the tornado trends. 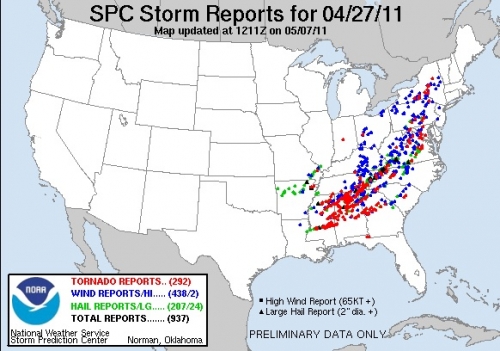 Reported tornadoes (in red) that occurred on April 27, 2011, during that month's Super Outbreak.
Credit: NOAA

But when Tippett and his team looked at trends in particular atmospheric measures of these two factors, “we found the opposite,” he said: Wind shear was behind the trends in extreme outbreaks.

Harold Brooks, a senior scientist with the National Severe Storms Laboratory in Norman, Okla., did some of the earlier research pointing to the trends in tornado days and said the new research is “well done and intriguing.”

The finding suggests that either climate change isn’t causing the observed trends, or that scientists still don’t have a good handle on how climate change may alter the storm environment.

“Trying to sort that out is the next big research question,” Brooks said.

It’s possible that other, natural, climate cycles that act over decades could be linked to the observed trends. To test this idea, the team used statistical analyses to see if they could find a correlation between some of these cycles and the trends in extreme outbreaks.

You May Also Like:
Odd Rifts in Antarctic Ice Could Mean ‘Sayonara, Glacier’
What You Should Know About Trump’s Cabinet & Climate
Tennessee Wildfire is ‘Unlike Anything We’ve Ever Seen’
Protection of Public Lands Cast in Doubt