After a long battle to even get on the agenda for ExxonMobil’s 2016 Annual Meeting, the company’s shareholders on Wednesday voted against four initiatives to address climate change, even while the company is facing an investigation for its climate denial activities...

Investors were hoping to force Exxon to add a climate expert to its board, to enact a policy to avoid 2°C warming, to increase capital distributions (with the understanding that continued investment in assets likely to be stranded is not a good long-term strategy), and to report on the impact climate change policies worldwide to the company’s bottom line.

“We know the path that Exxon is on, and the business strategy as it exists today, and as it existed for the last 50 years, is not a business strategy that is going to work in the 21st century,” Natasha Lamb, Arjuna Capital’s director of equity research and shareholder engagement, told ThinkProgress after the meeting. “It is not in line with a low carbon scenario where we limit the burning of fossil fuels.”

Throughout the meeting, it was clear that Exxon’s idea of tackling climate change was not in line with the view of the vast majority of the world.

“We believe that addressing the risk of climate change is a global issue,” Rex Tillerson, chairman, president, and CEO of Exxon, told shareholders during his opening remarks, which were streamed online. Touting his company’s record on the environment, Tillerson said ExxonMobil has invested $7 billion since 2000 to reduce the company’s emissions. He also said the company supports a revenue-neutral carbon price.

“Relative to the understand of the science, there’s no space between us and the IPCC,” he said, but he framed the IPCC’s push to keep climate change below 2°C as a policy issue. He also stressed that the world will continue to need fossil fuels. “Just saying ‘turn the taps off’ is not acceptable to humanity,” Tillerson said.

“It is a judgment of balance between future climatic events which could be catastrophic but are unknown, by the IPCC’s own acknowledgement, and more immediate needs of humanity today to address poverty, starvation, broad-based disease control, and the quality of life that billions of people are living in today, which is unacceptable to many of us,” Tillerson said.

Unfortunately, the catastrophic effects of climate change are already being felt around the world. Rising sea levels and warming waters are already causing bigger and stronger coastal flooding. California’s drought, India’s heat wave, and the floods in Texas have all been linked to climate change.

Scientists anticipate that future warming will threaten billions of people’s lives and trillions of dollars in investment.

“The reality is there is no alternative energy source known on the planet or available to us today,” Tillerson said, citing Bill Gates’ controversial calls for investment in new technology over a widespread transition to the solar and wind technologies we do have.

It is worth noting that Exxon recently announced that it has entered into a joint venture to develop fuel cells from carbon capture technology.

“The fallacy of what Tillerson is saying is just that: It’s a fallacy,” Miller said. “I came out here from California where we are building a clean energy-based economy, and we are doing so without some sort of magical silver bullets. And we are, in fact, slowly turning off those taps that he’s referring to.”

She also rebutted the idea that Exxon was more focused on poverty and starvation than its own continued fossil fuel business. “I’m sure they would be very happy to tell you about their charitable organizations, but whatever good they are doing is dwarfed by what they are doing in the way of polluting our skies and drowning our democracy in a tide of dark oil and money,” she said.

Exxon has been increasingly under fire from the environmental movement as well as from state investigations. New York, California, and the Virgin Islands are all actively pursuing investigations into what Exxon knew about climate change and when. Exxon has been closely tied to groups that have propagated climate denial, which, the state attorneys general say, could violate anti-fraud laws. Separate reports from Inside Climate and the Los Angeles Times last fall revealed that Exxon scientists knew that carbon emissions were fueling global warming as long ago as the 1970s. On Tuesday, the Guardian reported that the company used political pressure to quash a congressional lecture series on climate change in early 2001, shortly after former President George W. Bush was inaugurated.

Outside the meeting in Dallas, several dozen climate activists, including Miller, rallied against the oil and gas giant. 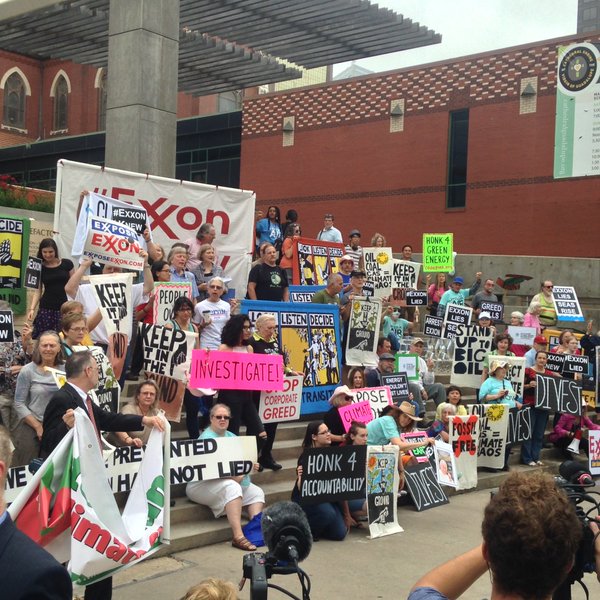 In solidarity w/ protests at the #ExxonAGM! The @TrueCostChevron network is doing the same right now @ #Chevron AGM pic.twitter.com/S2HpRCHRbA

Houston resident Renee Boschert spoke at the rally and again during the Q&A session with Tillerson as the votes were being tallied.

“My feeling is that the effects of climate change are real and are happening now, not something that is abstract and in the future,” said Boschert, who lost her house during the flooding in Houston earlier this year. “Fossil fuel companies may be legally liable for these climate change damages… What happens if the company loses the coming court battles… ? How is Exxon calculating the financial risk it would face if fossil fuel companies have to pay for damage from climate change?”

Tillerson’s offered one sentence before going to the next question: “Speculating on future court events would be irresponsible on my part, and therefore those numbers would be unestimable (sic),” he said.