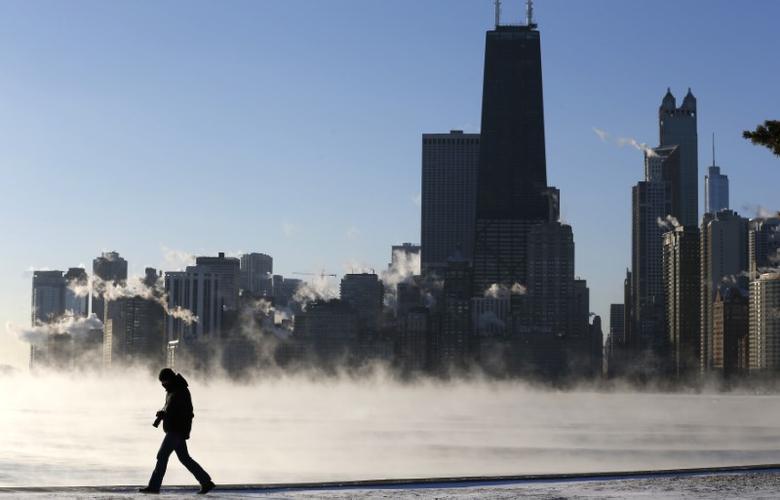 A man is silhouetted against the arctic sea smoke rising off Lake Michigan in Chicago, Illinois January 6, 2014. REUTERS/Jim Young

Fears that the coming winter will be as brutal as the polar vortex of two years ago has started a scramble in markets for natural gas, driving the primary U.S. heating fuel's price to 16-month highs...

Gas futures are up 29 percent so far this year, on track for the largest annual percentage gain in 11 years. Some expect prices to keep rising based on expectations of a tight market this winter, due to lower production and more exports.

"Unless we start getting some signs of more material supply growth by the December time frame, this is going to be a very tight market," said Martin King, vice president institutional research at Alberta energy advisory FirstEnergy Capital.

That would be the most since the 2013-2014 winter when HDDs totaled 2,834 and gas prices averaged $4.65 per million British thermal units according to HDDs from Commodity Weather.

Meteorologists at IBM's The Weather Company, however, do not expect as much cold. The Weather Company forecast HDDs will total about 2,499, shy of the 2,600 HDD 30-year norm, but with the highest concentration of cold early in the season on the U.S. East Coast.

Gas production is slightly lower than a year ago, while demand is up with increased exports to Mexico, as well as liquefied natural gas exports from the Gulf of Mexico.

Dry gas production in the lower 48 U.S. states fell to an average of 72.6 billion cubic feet per day since the start of 2016 versus a record high 73.3 bcfd during the same period in 2015, according to Thomson Reuters data.

King at FirstEnergy said gas could trade in the $3.50-$4.50 per mmBtu range from late December to early February, especially during times of extreme cold.

Futures for gas this winter (December-February) were priced around $3.34 per mmBtu, a 50 percent premium over the same period last year. Gas futures averaged just $2.07 last winter, which was the warmest on record.