FEBRUARY’S WARMTH, BROUGHT TO YOU BY CLIMATE CHANGE... 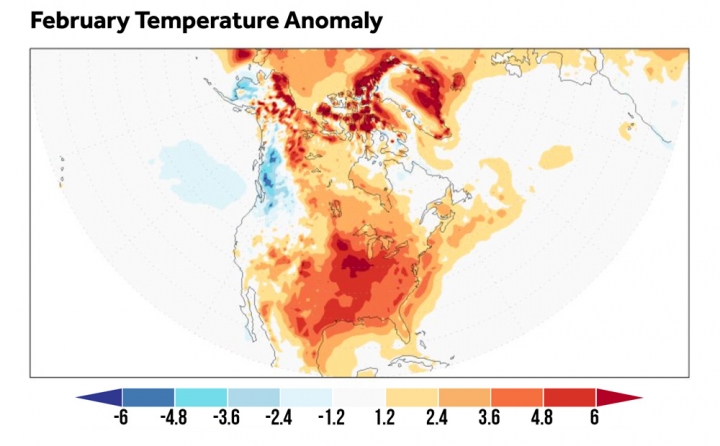 A bonanza of heat records fell throughout February in almost all quarters of the U.S. and research released on Wednesday shows that this pervasive spring-like warmth was made possible by climate change...

The rise in planetary heat made the freakishly warm February at least three times more likely than it was around 120 years ago, according to the analysis by scientists working on the World Weather Attribution team. While it was a month to remember, by mid-century that type of heat could occur every three years unless carbon pollution is curtailed.

The warm spell is just the latest piece in a growing body of evidence that climate change is playing a role in almost all extreme heat events. Winter is the fastest warming season in the U.S. and February is no exception. February temperatures in particular have risen by 3°F since 1895, which is roughly twice as fast as the global average.

This February fits right in line with that trend. It was the second warmest on record for the U.S., trailing only 1954, according to the National Centers for Environmental Information. The U.S. average for February was 7.3°F above normal, the fifth-most anomalously warm month ever recorded. In all, 16 states had their warmest February on record from Texas to New York.

The weather map was painted in red from border to border in the eastern two-thirds of the country for nearly all of February (and winter for that matter) with only the Pacific Northwest cooler than average. The heat drove a record-setting ratio of daily record highs vs. record lows and sped the arrival of spring in some areas by up to four weeks.

Scientists used historical data and climate models to understand what was driving the heat. Historical observations show that around 1900, this type of persistent heat was a 1-in-160 year event, but in our current climate it’s now a 1-in-12 year event. Using models to tease out the specific role climate change played, they found that it made the Ferbuary heat at least three times more likely.

If the world continues on its current pace of greenhouse gas emissions, this type of February could become the norm by 2050. 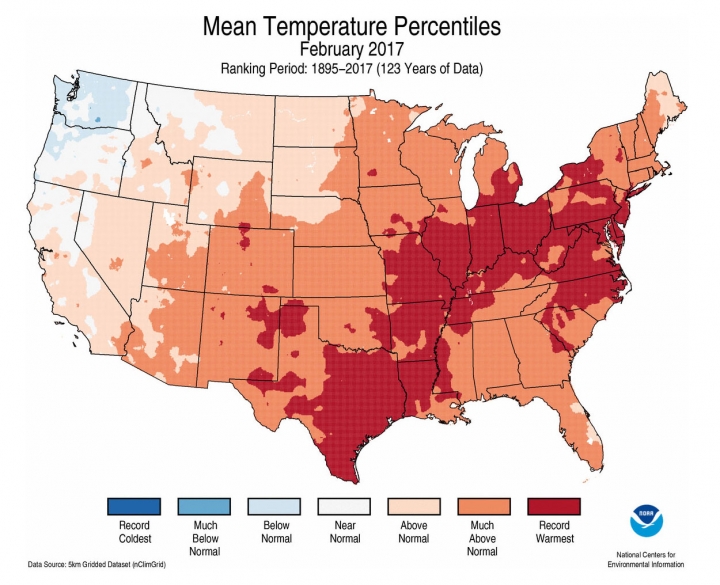 Temperature rankings across the U.S. in February. Credit: NOAA NCEI

“What our research shows is that this kind of heat has become more common and will continue to get more common in the future,” said Andrew King, a fellow at the ARC Centre of Excellence for Climate System Science in Melbourne and one of the report’s authors.

While the findings are not peer reviewed, the analysis used peer reviewed methods that have been used extensively in previous attribution studies. The vast majority of those studies have shown that climate change is driving extreme heat events around the globe.

“Across the world we're finding that we can link unusually warm weather events to climate change,” said King, adding that climate change is almost certainly playing a role in almost all extreme heat “for most of the world.”

“I’m aware of similar large changes in odds in other studies of wintertime high temperature events over the U.S., and so this is not too surprising,” Martin Hoerling, a climate scientist at the Earth System Research Laboratory, said.

Hoerling suggested that mismatch should be addressed in future research, though the “main points of the paper appear otherwise solid.”

A footnote to the report is that this February didn’t set a record for warmest February on record. That title belongs to February 1954. King said that month saw a very weird weather pattern that trapped heat over the entire U.S. (and much of Canada for that matter). The jet stream made a huge swoop that essentially cut off the majority of North America from Arctic air to the north in what meteorologists would call an extreme meridional jet stream pattern. 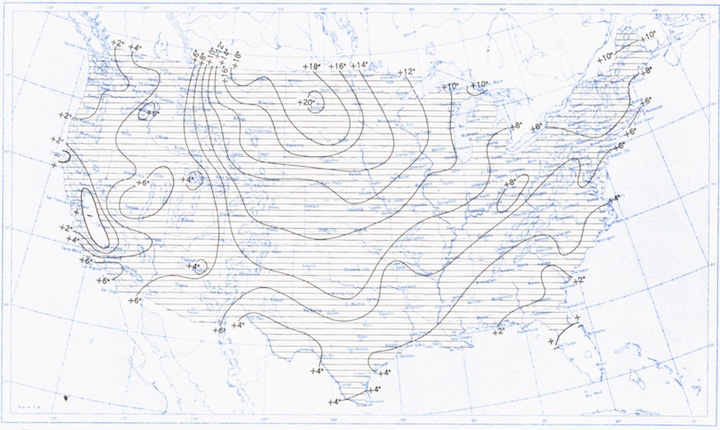 In comparison, February 2017 had a fairly normal weather pattern, interrupted only by the string of storms marching through California, reminiscent of a negative Pacific North American Pattern or PNA.

“These days we wouldn't need the same atmospheric conditions to match that heat because of the background warming trend,” King said.

Editors note: An earlier version of this story noted global warming made the February warm spell 13 times more likely instead of at least three.