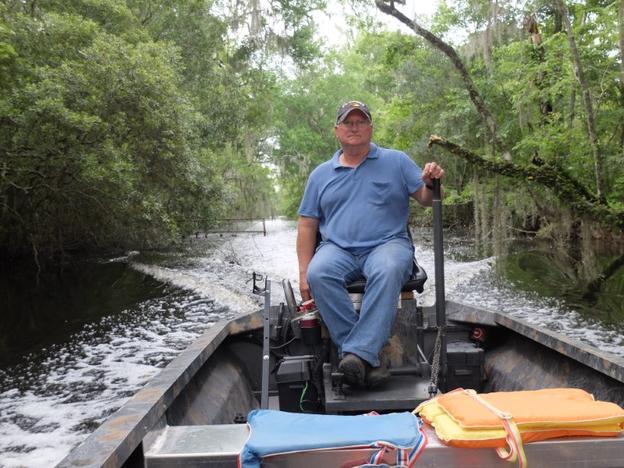 Rudy Gravois, a descendant of the Cajuns who settled in south Louisiana in the 18th century, hunts and fishes in its maze of bayous, South Vacherie, Louisiana, June 6, 2017. Thomson Reuters Foundation/Ellen Wulfhorst

Some 120,000 people live on the shrinking lowlands south of New Orleans - but getting their attention to looming environmental threats is no easy task...

Some 120,000 people live on the most vulnerable shrinking lowlands south of New Orleans, fishing for shrimp and crawfish, harvesting oysters or working in the shipyards, oil refineries and petrochemical plants along the river banks and Gulf shores.

They face difficult decisions over whether to stay and fight, or flee their diminishing land - yet even getting their attention to the looming threats is no easy task.

Related: 'Our culture is dying': Rising waters menace more than land in Louisiana...

Warnings that Louisiana is losing more than 10,000 acres - equal to 10,000 American football fields - of wetlands each year are often met with skepticism, distrust and resignation.

"Most people, they're trying to live their life," said Richie Blink, who lives in Empire, a town on a skinny stretch of river delta laced with canals to the Gulf. "They're worried about putting food on the table within the next two weeks and not what's going to happen 50 years from now."

Many work in the energy or commercial fishing industries, where depressed prices are costing jobs, he said.

The maps above show how the southern Louisiana coastline has receded since 1960. The data for these maps was originally created by the Louisiana Coastal Protection and Restoration Authority for the 2017 Coastal Master Plan.

Blink, 30, volunteers with LA SAFE (Louisiana's Strategic Adaptations for Future Environments), a $40 million project funded by the U.S. Department of Housing and Urban Development. It is asking coastal residents how they would like to adapt to changes predicted in the next 10, 25 and 50 years.

The delta that fans into the Gulf of Mexico, formed from silt carried by the Mississippi River, is subsiding and is no longer replenished by the powerful waterway.

Instead, the river is lined by levees, or raised banks, that rush its water past the delta into the depths of the Gulf.

Houses in Plaquemines Parish, like this one in Braithwaite on the Mississippi River delta, are often raised in an effort to withstand flooding and hurricane storm surges, Louisiana, June 7, 2017. Thomson Reuters Foundation/Ellen Wulfhorst

Maps of southern Louisiana a few decades ago show a boot of land, not unlike southern Italy, that is all but gone now.

Deprived of silt and fresh water, and sliced by hundreds of miles of deeply dredged shipping channels, the shrinking wetlands are growing less effective as natural barriers to storm surges from hurricanes, putting the area at higher risk of devastation.

"It looks pretty out here, but a storm comes along and half the land leaves," said Nicky Alfonso, 52, a commercial fisherman docked at Pointe à la Hache between the Gulf and a river levee.

"We're not the scientists, but we see what's happening," he told the Thomson Reuters Foundation. "We're losing land."

Many low-lying coastal regions in the United States face erosion and rising sea level, linked to climate change, but the Mississippi delta is particularly vulnerable because it is sinking as well.

It is subsiding an average of 9 millimeters (0.35 inches) a year, 50 percent faster than had been thought two years ago, according to Tulane University geologists, who described the coast of Louisiana as one of the "most vulnerable" in the world.

"We are in a race against time in Louisiana," Governor John Bel Edwards said in March, announcing LA SAFE - which he said could become a national model for threatened communities.

"A few of our most vulnerable coastal communities will need to contemplate resettlement over the next 50 years, while others are likely to experience population and economic contraction as a result of ongoing land loss and sea level rise," he said.

One such community is an Indian tribe on Louisiana's Isle de Jean Charles, in the process of relocating with $48 million in government funds after losing most of its land to the sea.

At recent LA SAFE meetings, held in schools and church meeting rooms in parishes along the coast, residents tossed around ideas to adapt to the shifting landscape, from elevating houses to promoting local seafood or building public transport.

LA SAFE works alongside the state's Coastal Master Plan, a blueprint of more than 120 projects to fight coastal loss in the next 50 years. Fully funded, the plan would cost $50 billion.

An initial LA SAFE meeting in Plaquemines Parish, home to some 23,000 people, drew a crowd of 139 inhabitants. But a follow-up meeting centered on the parish's east bank drew fewer than two dozen, and a meeting at its southern tip just nine.

Locals are tired of being the subjects of a seemingly endless string of studies since Hurricane Katrina in 2005, said Darilyn Turner, 43, who runs Zion Travelers Cooperative Center, a coastal restoration group in Plaquemines.

Katrina devastated low-lying Plaquemines and neighboring Lafourche Parish, followed five years later by the BP oil spill that poured millions of gallons of oil into the Gulf of Mexico and fouled 100 miles (160 km) of coastline.

BP agreed to pay about $18.7 billion in damages caused by the spill, settling with the U.S. and state governments.

"You come in here with your clipboards and your surveys," said Turner. "Then you never hear from them again.

But make no mistake, they are concerned. "Just standing outside on their lawns, people are having conversations about the coast and why we need to be protected," she said.

Living next to a levee on the Mississippi River's east bank, Gerard Griffin, 70, sees melting polar ice caps and subsiding land as real threats, but is suspicious of efforts to help.

He figures industry and the government want the mineral and natural gas-rich land of Plaquemines for themselves.

"Down in the country, I think they been trying to discourage us," he said. "If they can get us to leave and sell out, then that's what they want."

"There's a lot of money to be made down here. This is the gateway to the Gulf," said Bulot, 30.

But it won't work, he added.

Bulot rebuilt after losing his house to Katrina, the way his grandparents did after Hurricanes Betsy in 1965 and Camille four years later.

Besides, while he sees the delta sinking and the coast eroding, he is skeptical about the water rising.

"Somebody prove to me, scientifically fact, that the water keeps rising," he challenged. "It's not."

Science in fact does show the water getting higher. The U.S. National Aeronautics and Space Administration reports that global mean sea level is rising at a rate of 3.4 millimeters (0.13 inches) per year.

Studies say the rate is accelerating, fed by thawing ice sheets and glaciers and the expansion of ocean water as the planet warms.

"You talk about international climate and global weather patterns and things like that, it's very hard for people to understand," he said.

"But when you're talking with a commercial fisherman and they tell you that the shrimp are showing up a full two months earlier than they were in the 1960s and the 1970s, then they acknowledge that there are changes," he said.

While plenty of people in southern Louisiana may experience disappearing land and rising water, they may not believe the government has their best interests at heart, said John Doucet, a geneticist at Nicholls State University in Thibodaux, Louisiana, and a faculty member at its Center for Bayou Studies.

One reason, he said, is that they have not been protected from the sky-rocketing costs of buying flood insurance - something banks require before making home loans.

"There's a large anxiety about trusting government to make good choices for the people," he said.

Neither do they take well to outsiders telling them what to do, a wariness that goes back in time, he said.

The Cajuns descend from people brutally expelled in the 18th century from what is now Canada. They made their way to Louisiana, where they landed along its southern bayous, the slow-moving waterways that course through the swampland.

Many died of disease and starvation along the way.

The Thomson Reuters Foundation is reporting on resilience as part of its work on zilient.org, an online platform building a global network of people interested in resilience, in partnership with the Rockefeller Foundation.