FIRE, FLOODS, TORNADOES: FATAL WEATHER ROUNDS OUT A YEAR OF EXTREMES IN 2015... 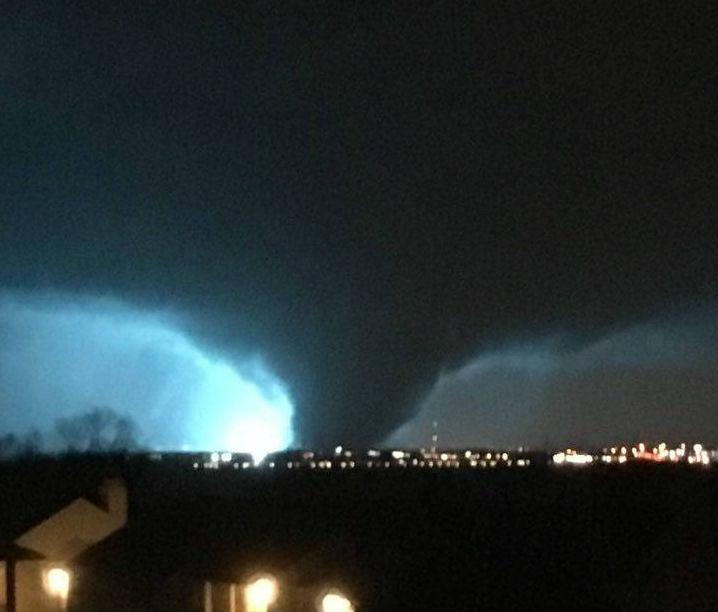 Record heat in southern Australia, winter tornadoes in Texas and "biblical" flooding in Britain are among the wacky extreme weather events rounding out 2015 across the globe.

Visitors to Melbourne for the Boxing Day Test might not have experienced much heat on or off the field during the one-sided contest between Australia and the West Indies, which was played in temperatures that barely climbed into the 20s.

But if they hang around for a few days, Melbourne will warm back into the mid- to high-30s by Thursday, making it likely the city will experience at least its third-warmest December on record, Ben McBurney, a meteorologist at Weatherzone, said. The blaze in the Victorian town of Wye River on Christmas Day. Photo: Keith Pakenham / CFA

So far this month, Melbourne's average maximums are running at 27.4 degrees, a full degree warmer than Sydney well to the north.

Dominant highs in the Tasman Sea have kept the Harbour City stuck in a moderate spell with daily tops in the mid-20s that has at least another week to run, Mr McBurney said.

Such mild conditions would probably be welcomed in Adelaide as residents there head for "comfortably" that city's hottest December on record, he said. A couple drive a makeshift raft on a flooded street in Asuncion, Paraguay. Photo: Jorge Saenz/ A[

Temperatures in the SA capital will lurch back towards the high 30s by Wednesday, with the hot conditions spilling back into Victoria and elevating the fire risks around the popular holiday strip around Lorne.

The Bureau of Meteorology is expecting heatwave conditions over much of south-eastern Australia for the three days from Wednesday: Damage of a house at Rowlett, Texas Photo: AP

A year of extremes The gradual background warming of the planet caused primarily by the build-up in greenhouse gases is being amplified this year by one of the strongest El Nino events on record.

During El Nino years, the Pacific Ocean's easterly winds stall or reverse, resulting in less heat being absorbed and altering rainfall patterns that can have worldwide impacts.

A classic outcome is South America cops heavier than usual rain, a result evident this past week with about 140,000 people forced to evacuate their homes in a region taking in parts of Argentina, Brazil, Paraguay and Uruguay.

For Africa, it's the opposite, with South Africa among the nations caught up in the worst drought in a generation, the New York Times reports.

While Californians are hoping for more El Nino-linked rainfall to ease a crippling drought, other parts of the US have been hit by weather extremes.

Unseasonable tornadoes and heavy rain ripped through southern and central US states over the Christmas holiday, leaving more than 30 people dead, with more twisters likely in coming days.

At least 11 people were killed in the Dallas area over the weekend by tornadoes, including one with winds of strong as 322km/h that lifted cars off highways.

"A tornado of that strength is very rare in a metropolitan area," National Weather Service meteorologist Matt Bishop said.

Further to the east, though, unusual warmth has continued to set records from Florida to north-eastern states such as Maine, as US meteorologist Eric Blake posted to Twitter:

Much of the European continent has also had an exceptionally warm period over Christmas. To the north, though, parts of Britain have been inundated by floods, including the cities of Leeds and York.

Floods Minister Rory Stewart said rainfall levels in the flood-hit areas were unprecedented, while others have described them as as being of biblical proportions.

While much of Australia has been crying out for rain, parts of the north are being flooded as a deep low pressure system moves eastwards.

A woman died after her car got caught in a floodway in the Northern Territory, becoming the second likely death from flooding since Christmas.

A police helicopter spotted the vehicle in floodwaters about four kilometres from the remote Beswick community, east of Katherine, on Sunday night. It's believed the elderly woman was one of five people in the car.

Hopes are fading in the search for a 28-year-old man missing from Peppimenarti in the Daly River region since Christmas Day.

The Flinders Highway near Julia Creek was cut due to flood waters on Sunday morning which also made it difficult for emergency teams to reach a derailed Aurizon train 150m from the highway at Quarrells.

The freight train spilled diesel fuel and 200,000 litres of sulfuric acid while three Aurizon employees suffered minor injuries in the incident in which all 26 carriages and the locomotive came off the tracks.

The tropical low is expected to continue to drift eastwards and the bureau is warning about the potential for flash flooding north of Townsville, especially around Innisfail, on Tuesday.

The bureau is also predicting heavy falls of as much as 400mm in parts of northern Queensland over the coming eight days:

Weatherzone's Mr McBurney said the course that low pressure system tracks will have a big influence on weather conditions for Sydney and other parts of south-eastern Australia over the coming days.

According to one model, the low will shift southwards, bringing cloud and rain.

"If that low comes down it could really break up the heat," he said, potentially easing fire weather conditions until the middle of January.

Other models, though, have the low staying to the north.

- With Reuters, PA and AAP