FLOODING IN DENMARK BECOMING THE NORM... 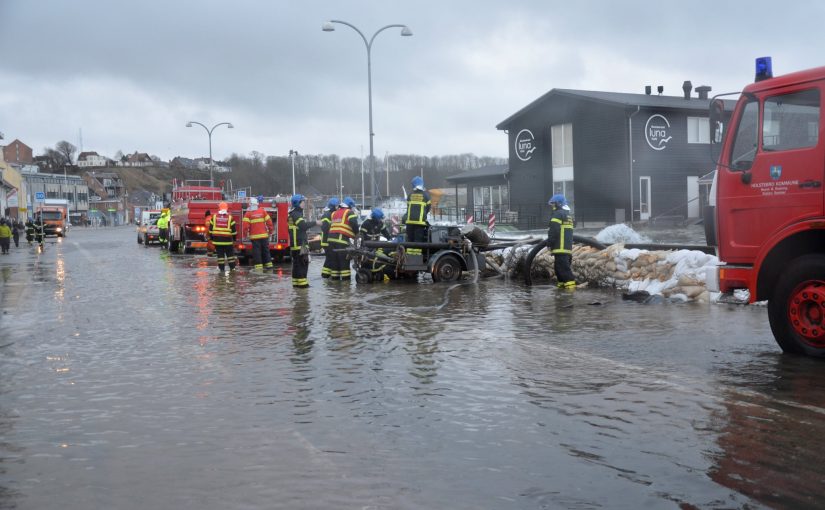 A more common scene in the future? (photo: Kystdirektoratet)

Yesterday, emergency departments, police and military personnel, and volunteers across the nation fought off flooding as sea levels dramatically rose in Danish waters.

Levels rose as high as 177 cm above sea level in southern Denmark, and 157 cm just south of Copenhagen.

The flooding hit southern Denmark worst, but parts of Copenhagen were also flooded, particularly in Amager and Dragør.

At one point yesterday evening, Denmark even called on its neighbours Sweden and Germany for emergency assistance.

Climate change on the charge
The national weather forecaster DMI described the event as a “once-in-a-century” event, but as flood waters begin to subside across the nation, experts warn the Danes might have to get used to flooding of this nature.

“The historically abnormal weather we see today following one low-pressure system after another low-pressure system, which can result in flooding, is a reminder that climate change is in full vigour,” Jens Hesselbjerg, a climate professor at the University of Copenhagen, told Metroxpress newspaper.

“We can’t rule out that climate change’s effect on flooding is accelerating even more swiftly than we had anticipated.”

Once-a-decade event?
Carlo Sørensen, a senior coastal technician with the Danish coastal authority, Kystdirektoratet, and Kirsten Halsnæs, a professor of climate and economy at the Technical University of Denmark (DTU), concur with that analysis.

According to Sørensen, the sea level will rise by 70 cm looking ahead to the year 2100, and Halsnæs said she wouldn’t buy a house located below sea level.

“The floods are coming more often than we have seen before,” Halsnæs told Metroxpress newspaper.

“How big and many we don’t know yet, but what we called a ‘once-a-century’ occurrence took place in 2006 and again now.”

According to a report from 2011, the top 10 areas in Denmark most in danger of seeing floods are Aabenraa, Fredericia, Holstebro, Juelsminde, Korsør, Køge Bay, Nakskov, Odense Fjord, Randers Fjord and Vejle.

More rain – more rain during the winter and less in the summer. During the summer there will be more drought periods and heavier rain

Milder winters – the winters will become milder and wetter. It could lead to the plants’ growth season being extended

Warmer summers – the summers will become warmer and include more heatwaves

More clouds – more clouds will cover the skies above Denmark, particularly during winter