FLOODS AND EROSION ARE RUINING BRITAIN’S MOST SIGNIFICANT SITES... 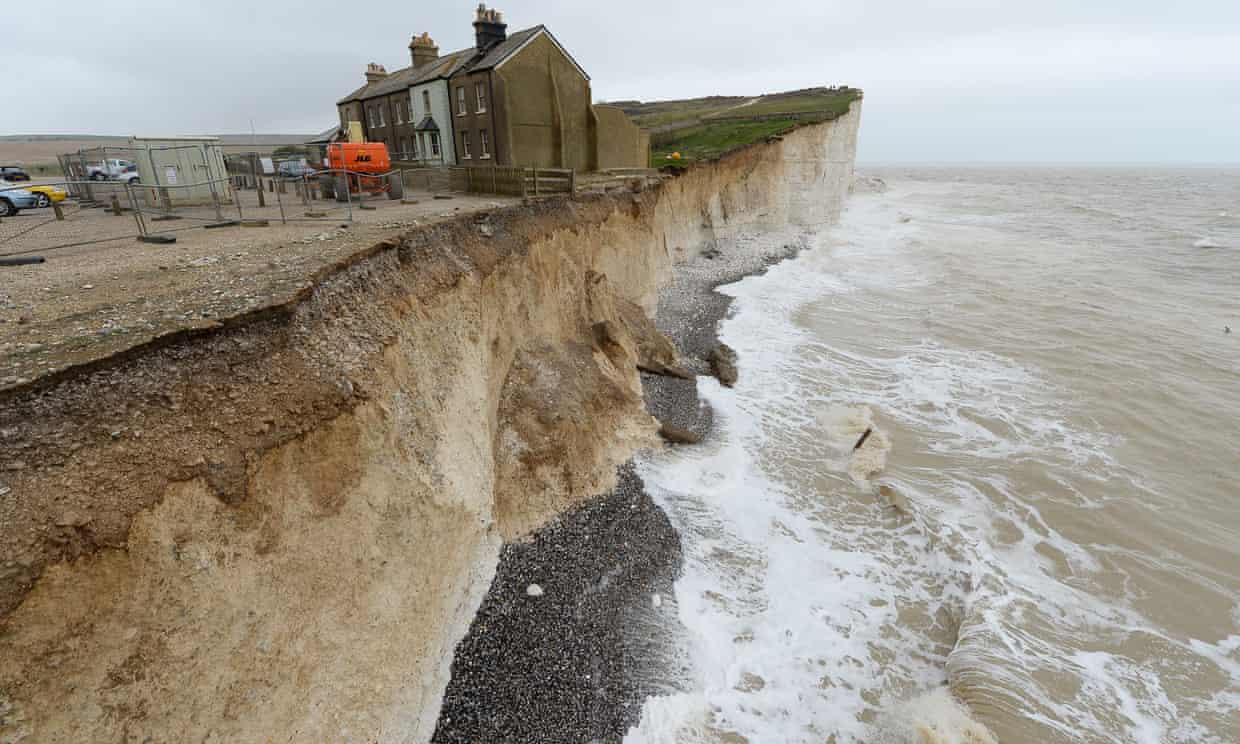 Cottages at Birling Gap were once one of seven properties. The fifth pebble-dash end-of-terrace was demolished in March 2014. Photograph: Mike Hewitt/Getty Images

Climate change is already wrecking some of Britain’s most significant sites, from Wordsworth’s gardens in Cumbria to the white cliffs on England’s south coast, according to a new report.

The report was produced by climate experts at Leeds University and the Climate Coalition, a group of 130 organisations including the RSPB, National Trust, WWF and the Women’s Institute.

“Climate change often seems like a distant existential threat [but] this report shows it is already impacting upon some of our most treasured and special places around the UK,” said Prof Piers Forster of Leeds University. 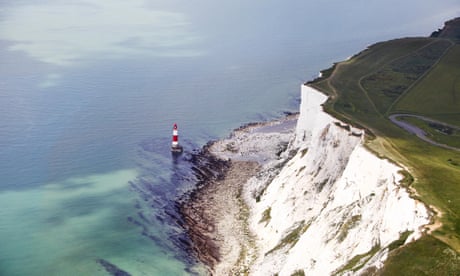 “It is clear our winters are generally getting warmer and wetter, storms are increasing in intensity and rainfall is becoming heavier. Climate change is not only coming home – it has arrived,” Forster said. It is also already affecting everyday places such as churches, sports grounds, farms and beaches, he said.

Wordsworth House and Garden in Cockermouth, where the romantic poet William Wordsworth was born in 1770 and learned his love of nature, was seriously damaged by two recent flooding events linked to a changing climate.

In November 2009, torrential rain caused £500,000 of damage, sweeping away gates and walls that had survived since the 1690s. Floods inundated the site again during Storm Desmond in December 2015. “When I saw the damage the floods had caused in 2009 I was shocked and it took almost three years to repair the garden,” said the house’s head gardener, Amanda Thackeray. “Then after all that hard work to see the devastation from flooding in 2015 was very upsetting.” 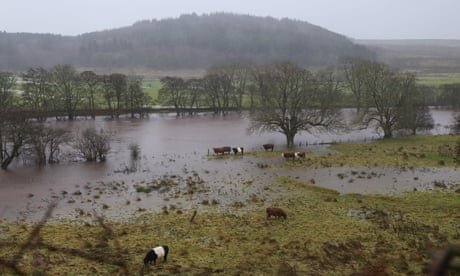 Flooding: 'Up here in the north-east, we’re just forgotten about'...

A century-long record shows the UK is experiencing more intense heavy rainfall during winter. Researchers can also use climate models to reveal the influence of global warming on some extreme events and have found the UK’s record December rainfall in 2015 was made 50-75% more likely by climate change. Another study found Storm Desmond was 40% more likely to have occurred because of the human activities that release greenhouse gases, such as burning fossil fuels.

Birling Gap is part of the world famous Seven Sisters chalk cliffs on England’s south coast and over the last 50 years, about 67cm of cliff is eroded each year. But during the winter storms of 2013-2014, the equivalent of seven years of erosion occurred in just two months.

“The succession of storms provided a stark warning that coastal ‘defence’ as the only response to managing coastal change looks increasingly less plausible,” said Phil Dyke, coastal adviser at the National Trust. “We must learn how to adapt.”

Existing buildings at Birling Gap are being lost and new buildings will be designed to be easier to move back as the cliff disappears. Scientists know that climate change is driving up sea levels and increasing the likelihood of more intense storms, meaning the rate of erosion is likely to rise. 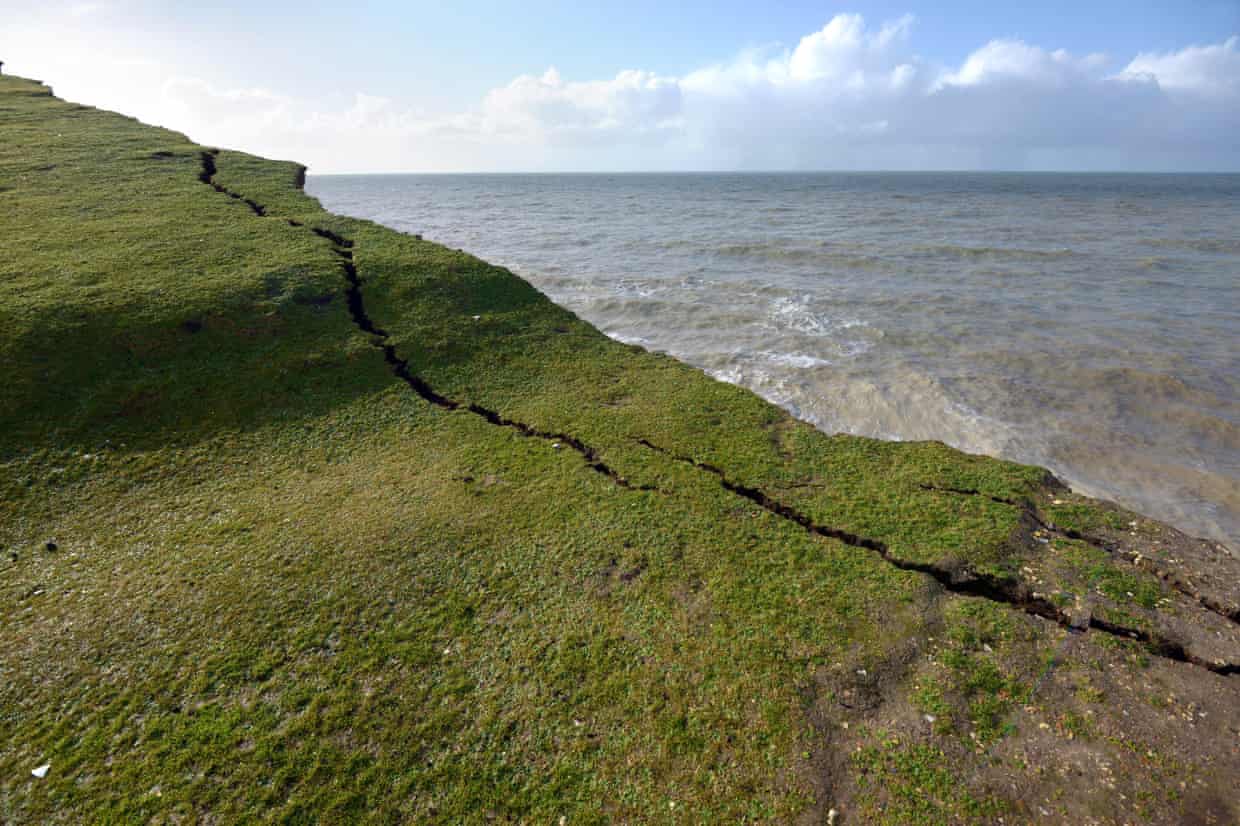 Rising temperatures are also affecting wildlife, including in the famous salmon rivers, the Wye and Usk, where otters and kingfishers also live. December is peak spawning time for salmon in Wales, but recent winters have been exceptionally warm.

“After eliminating other potential causes such as disease and lack of adults, we have come to the conclusion that the exceptionally high water temperatures of November and December 2016 are the reason for the disastrous salmon fry numbers this year,” said Simon Evans, chief executive of the Wye & Usk Foundation. 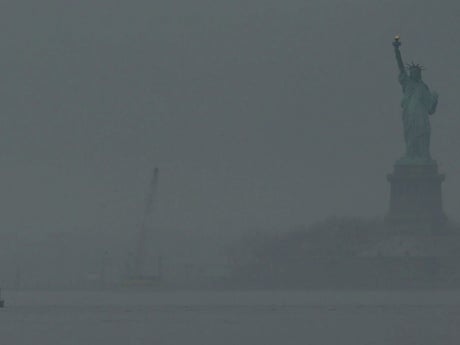 Landmark sites in the US at risk from climate change – in pictures...

2015 was little better, with young salmon found at just 17 sites out of 142, when they usually would be expected at 108 areas. Research has shown salmon populations across the Wye catchment fell by 50% from 1985-2004, despite cuts in water pollution. But stream temperatures have risen by up to 1C in that time, leaving researchers to conclude that climate change is a key factor in plummeting salmon numbers.

Slimbridge wetlands in Gloucestershire is one of the UK’s most important bird sites, hosting 200 species from all over the world, but is also seeing changes as the climate warms. Numbers of migratory white-fronted geese have fallen by 98% in the last 30 years due to warmer weather further north.

Geoff Hilton, at the Wildfowl and Wetlands Trust said the shrinking flocks could have knock-on effects on the wetland habitat: “These are quite big changes ecologically. If you suddenly lose thousands of geese from a wetland, there are bound to be big effects on that wetland.” 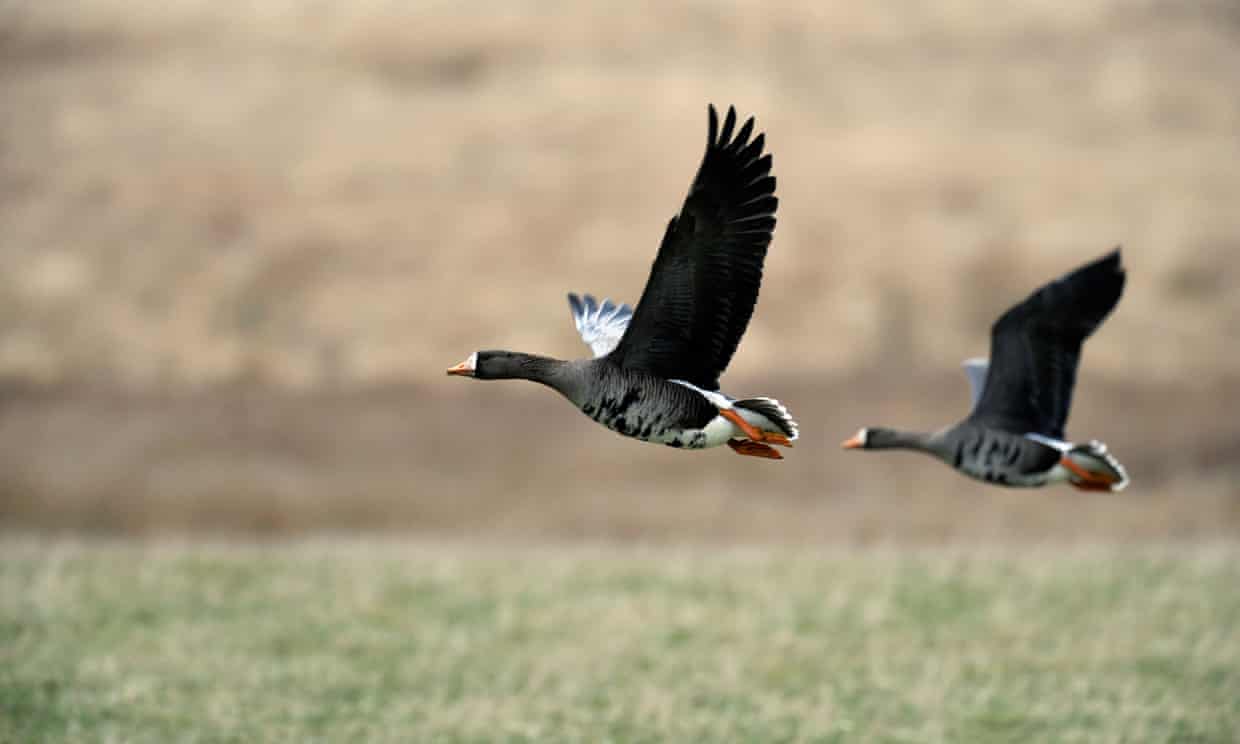 Numbers of migratory white-fronted geese have fallen 98% in the last 30 years due to climate change. Photograph: Alamy

Warmer conditions have also meant water primrose, an alien invader to the UK, has grown aggressively in wide, dense mats and is seriously damaging native plants and fish. However, warmer winters have seen little egret numbers visiting Slimbridge increasing from just eight in the 1990s to 30 in 2013.

Other sites being ruined by climate change, according to the new report, include a famous riverside pub on Manchester’s river Irwell, the Mark Addy, which has not re-opened after the 2015 winter floods and the historic clubhouse at Corbridge cricket club in Northumberland, now demolished after the same floods.

The report also warns that the 5,000-year-old neolithic village at Skara Brae on Orkney, revealed after a great storm in 1850 stripped away grass and sand, could be destroyed in future as violent storms become more common.