FLORIDA IS DUE FOR A RECKONING. WILL IRMA BE IT? Hurricane Irma, one of the most powerful storms in recorded history, looks set to hit the continental United States in the coming days. If we are lucky the storm will veer back out to sea, but the National Hurricane Center’s forecast shows the hurricane bearing down on South Florida. Even if it only sideswipes the state, it will wreak havoc...

Florida is statistically due for a hit. According to the National Hurricane Center, 40 percent of hurricanes to strike the United States from 1851 to 2010 hit the Florida coast, a total of 114 hurricanes in 160 years. In other words, a hurricane hits Florida every year or so on average. Last year, Hurricane Hermine produced a nearly six-foot-high storm surge when it landed in northern Florida, but before that, the state went more than a decade without a single hurricane landfall. As the planet has warmed, development along Florida’s flood-prone coastlines has left more people more vulnerable to storms.

Four of the top eight cities in the United States most vulnerable to a major storm surge are in Florida, according to a recent report. This is not just because South Florida is extremely flat and low-lying, although this is certainly a major problem. More than half of the people in the United States who live four feet or less above sea level live in South Florida. In addition, cities like Tampa, Fort Myers and Sarasota lie alongside big areas of shallow water that produce strong storm surges when hurricane winds funnel water toward shore. 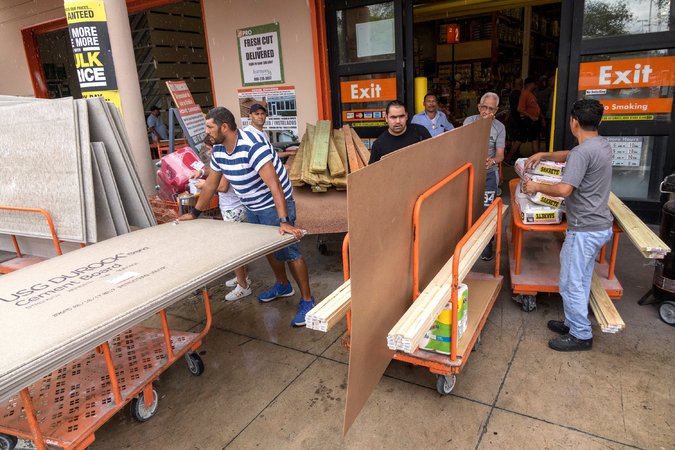 Aggravating matters, South Florida’s cities, in particular its largest, Miami, are built on porous limestone that’s effectively a rocky Swiss cheese. As the limestone soaks up rising seawater, Miami’s infamous “king tides” — fresh water forced up from drains and pipes by underlying salty water — become more frequent. Because of this limestone geology, Miami and other cities in South Florida cannot build substantial sea walls to hold back storm surges the way other cities, like New Orleans and Rotterdam, have. The water would simply flow underneath.

Yet despite these dangers, South Florida continues to grow. The state as a whole has gained more than two million residents since Hurricane Wilma in 2005. None of these arrivals have firsthand experience of Florida’s unique exposure to natural disasters. Although the state has an exemplary emergency response system, much will depend on how ordinary people react in the face of the hurricane. With a storm the magnitude of Hurricane Irma, people helping other people are the most important resource.

And Florida’s real estate market is booming. Although the 2008 financial crisis plunged millions of homeowners into foreclosure, the property market quickly rebounded. New luxury condos have popped up in Florida in recent years, significant numbers of them in areas likely to flood as climate change causes increasingly ferocious storms. For decades, state and local governments have permitted development in hurricane-prone areas. They have argued that this development adds to the tax base, which can in turn generate funds that can be used to shore up disaster defenses. But such policies ultimately place more property — and people — in harm’s way.

What will happen when all that property is deluged by a megastorm, whether it is Irma or the hurricane after it? In six of Florida’s most vulnerable cities, more than a million homes at risk for storm surge damage are not covered by flood insurance, according to recent analysis. These homeowners face financial ruin. Meanwhile, nearly 1.8 million Florida homes and businesses are in the beleaguered National Flood Insurance Program, which was $25 billion dollars in debt even before Hurricane Harvey; Irma could push it much deeper underwater.

As if all this were not enough, there’s the threat of a storm-caused nuclear meltdown. The Turkey Point nuclear power station sits on an exposed island in Biscayne Bay, about 25 miles south of Miami. Built in the early 1970s, the aging plant depends on similar vulnerable backup systems to prevent a meltdown as those of Japan’s Fukushima plant, which is still leaking radiation. Although Turkey Point’s main reactors are 20 feet above sea level, the plant’s diesel-powered backup generators, which keep cooling water circulating through the reactors when power is knocked out, are less elevated and less well insulated, according to Phil Stoddard, the mayor of South Miami.

Florida needs to confront the reality it faces as a state in the front lines of climate-change-related disasters, including the folly of coastal development. The state needs to begin exploring managed retreat from areas that are particularly threatened, offering buyouts to homeowners with properties in low-lying areas so that their land can be turned into flood-absorbing wetlands or aquatic parks. Maximum care should be taken to ensure that this retreat does not siphon funding to the rich while ignoring the needs of low-income homeowners.

One way or another, Florida is due for a reckoning. We can only hope that it will not be too grievous, and that whatever happens it will help transform the political culture of a state whose governor is a climate-change denier despite Florida’s extreme vulnerability to natural disasters, a place where solar power is essentially banned despite its fame as the Sunshine State.

Ashley Dawson, a professor of the environment and the humanities at the Princeton Environmental Institute, is the author of “Extreme Cities: The Peril and Promise of Urban Life in the Age of Climate Change.”