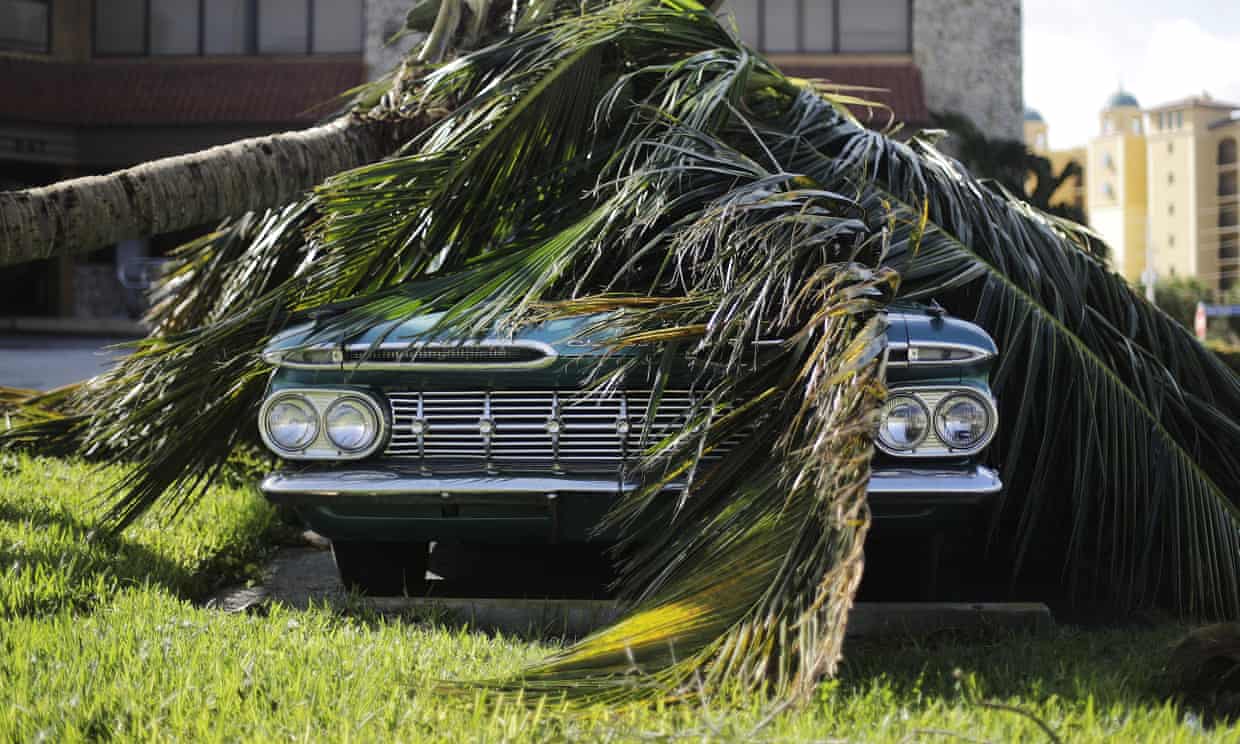 On Marco Island, widespread destruction in Irma’s wake is not enough to make believers out of some climate change skeptics

They sat through hours of pummelling by Hurricane Irma, with winds pounding them at up to 115mph and rain driving in a solid white sheet as bright as a snow blizzard. Then on Monday, Floridians woke up to survey the damage, begin the cleanup and get back to carrying on regardless. 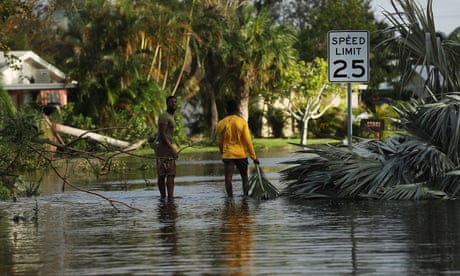 By noon, the jet skiers were back on the water, buzzing around the west coast waterways under a blue sky where only hours before Irma had shaken the trees and put fear in people’s hearts.

The catastrophe that had been forewarned over countless hours of rolling cable television appeared to have been avoided. But only narrowly.

For its lucky escape, the US has Cuba to thank, given that the northern coast of the island soaked up an important part of Irma’s energy before the storm reached Florida. Not that the debt of gratitude will be repaid by the current incumbent of the White House.

On Marco Island, a residential area on the west coast south of Naples where Irma made landfall on Sunday afternoon, hundreds of cars were lining up at the causeways. Their owners were desperate to get back home.

"They always tell us we will have a storm surge. I know they're doing it for safety reasons but I’ve never seen it happen"

But police barriers were preventing access and the island continued to be eerily empty of vehicles and people. You could have mistaken the day for one of the major holidays, Christmas or Thanksgiving, were it not for hundreds of trees strewn across the roads like green confetti.

Despite the profuse warnings and orders to evacuate, about 1,000 people rode out the storm on Marco Island. All appeared safe, though windows were blown out in condominiums on the main waterfront.

The question now is whether local residents, Floridians and by extension America writ large will ponder the lessons of Irma, consider its portent of intensifying extreme weather in the wake of climate change, and decide to do something about it. The early message coming from Marcos Islanders on Monday was crystal clear.

Chris Roche, 52, a real estate lawyer, was taking a long hard look at the damage to his home. Three trees were down in the yard, some tiles had come off the roof and there were signs of grey mud on the road – Irma’s calling card, dredged up from the seabed and deposited right outside his door. 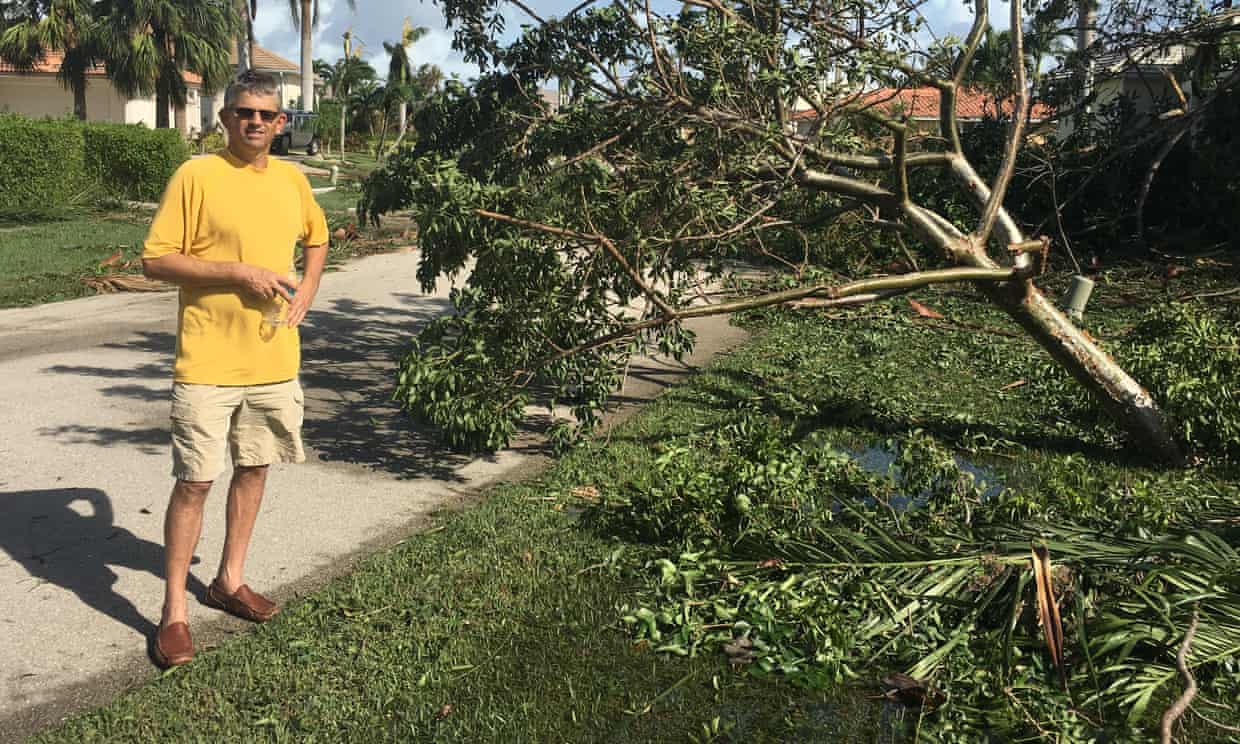 That was enough destruction to be getting on with. Wasn’t he fed up with the constant disruption of his life, a pounding that was certain to get worse with sea-level rise and growing weather disturbances caused by climate change?

This was the fifth or sixth hurricane he had sat through since he moved on to the island in 1979, he said with the nonchalance of someone discussing trips to the theater. He was more than a little skeptical of the warnings to evacuate which he had heard and duly ignored.

“They always tell us we will have a storm surge,” he said. “I know they are doing it for safety reasons, but I’ve never seen it happen.”

That was quite a striking comment just hours after a massive hurricane of terrifying force, some of which may have been the gift of global warming, tore through his home.

“I don’t think man is the tipping point. I think it’s more natural than that. We’re not experiencing historically close [to] high temperatures, not even close to it.” 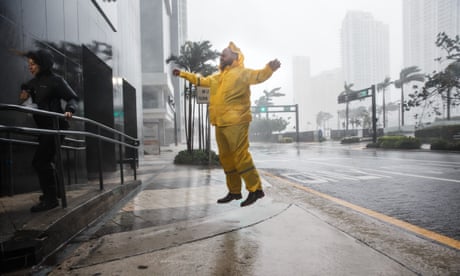 On the other side of the island, in a group of mansion houses known as “the estate”, John Sullivan, 63, was cleaning up the driveway of a friend’s house that was strewn with palm fronds. He’d ridden the storm out there as it had a generator for power, which was otherwise down throughout the west coast.

“I really thought we were going to get hammered this time,” he said. “Take away the downed trees and the missing roof tiles, for a cat[egory] 4 hurricane we could have done a whole lot worse.”

Back in the evacuated hotel in Naples, Florida, where the Guardian and other journalists hunkered down as the storm passed through on Sunday, the storm chasers were packing their bags and preparing to move on to the next Big One. This time in Taiwan.

“I think Irma did great,” one said. “It was a very solid hurricane. Very solid indeed.”