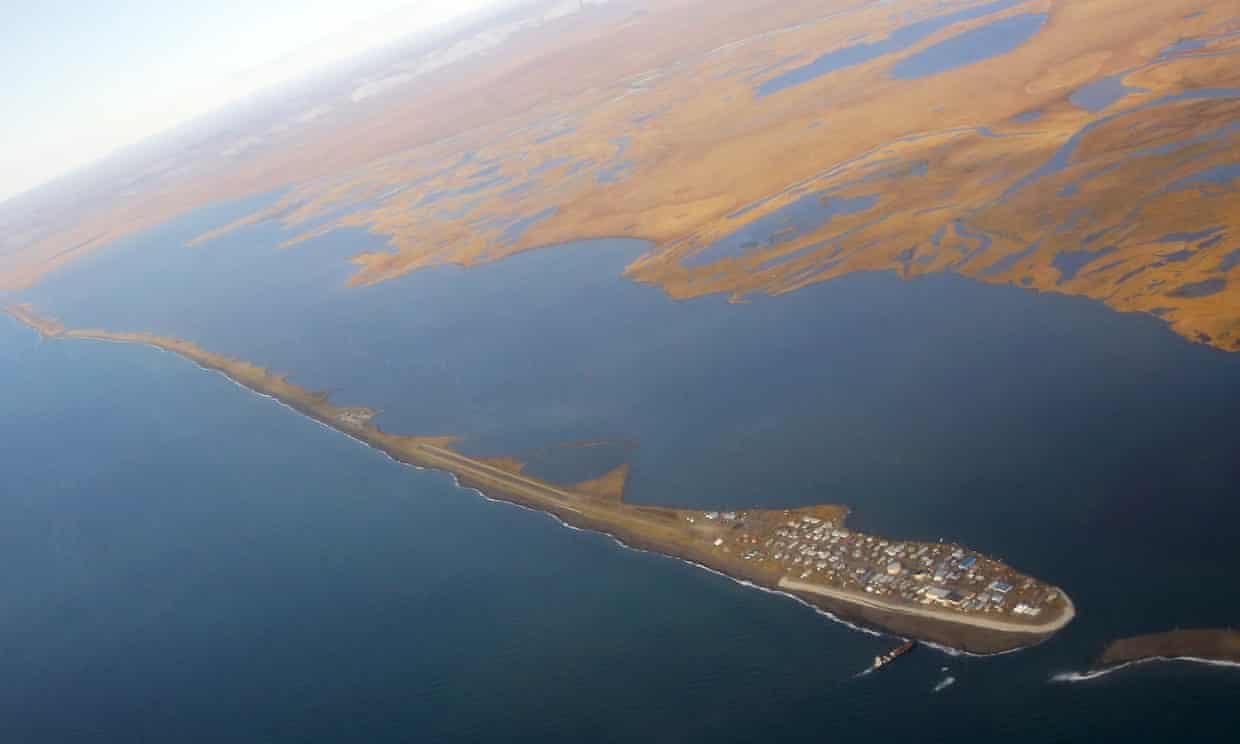 The island village of Kivalina, an Alaska Native community at risk from rising sea levels, another top concern of US voters surveyed by Guardian US. Photograph: Jonathan Ernst/Reuters

Survey of Guardian readers appalled at lack of climate discussion in 2016 campaign finds food and water shortages viewed as most pressing consequence...

Diminishing food and water security and ruinous sea level rise are the leading climate change concerns of a section of the American electorate that is aghast at the lack of discussion of global warming during the presidential debate.

Related: Climate change: the missing issue of the 2016 campaign

A Guardian US survey of its readers found that pressure on food and water supplies is considered the most important consequence of climate change. Sea level rise, which is set to inundate coastal areas currently occupied by millions of Americans, is second on the list of the most urgent issues.

The online poll, part of the Guardian’s Voices of America project, further highlights frustration among many voters over the tepid level of debate over climate change in the presidential race so far.

Readers were asked to rank what they think are the most pressing issues thrown up by climate change. Phasing out fossil fuel, expansion of renewable energy and the unfolding disaster affecting coral and other marine life were all popular picks for the most important category. Deforestation and climate refugees also ranked highly.

One reader said: “It’s frightening that neither major candidate is stressing the environment. Both buy into the concept that environmental concerns are bad for the economy. So sad to see Mrs Clinton backpedal on coal.”

A separate commenter said: “I fear we have already waited too long for significant stopping action, but I’m still hoping for at least a chance for my grandchildren to live.” Another said: “We have to stop pouring gasoline on the fire. If we don’t address the root causes of all this suffering – our wasteful and destructive practices in all these areas – there is no hope for improvement.”

Another reader wrote that they recently moved from south Florida to northern California. “Northern central California may turn to desert eventually but at least will not be underwater with no fresh water supply. Climate change is going to adversely effect the world in countless ways. Climate change refugees is going to become a huge issue.”

Some people said that it was the media’s fault, rather than candidates such as Hillary Clinton and Donald Trump, for the lack of focus on climate change. A small number disputed that climate change is an issue, which is contrary to the view of all of the world’s leading scientific institutions and the 174 nations that signed the landmark Paris climate accord last year. More than 600 people responded to the online survey.

According to a Gallup poll taken in March, a record number of Americans now accept that global warming is real and poses a threat to their way of life. Despite this, climate change has rarely been a focal point of the presidential campaign.

Democratic contenders Clinton and Bernie Sanders have stressed their support to lower emissions, although Sanders has been more willing to rule out underground fracking for gas. Donald Trump, the presumptive Republican nominee, has said that climate change is a nefarious plot invented by the Chinese and has threatened to remove the US from the Paris deal.

All previous Republican challengers didn’t raise the issue unless pressed on it, with former Florida governor Jeb Bush putting his faith in “someone in a garage” to solve the problem.

The US just recorded its warmest June on record, with worsening wildfires across the west and California still enmeshed in its worst drought in 1,200 years. Arctic sea ice experienced record lows for both winter and summer, with parts of Alaska effectively “robbed” of a winter.

Worldwide, heat records have been set for a stunning 13 months in a row, to the astonishment of climate scientists. India recently had its hottest ever day at an incredible 124F (51C).

A mass bleaching event, caused by elevated ocean temperatures, has threatened to kill off a chunk of the Great Barrier Reef. Atmospheric concentrations of carbon dioxide will surpass the symbolic barrier of 400 parts per million (ppm) this year and will not fall below this level in our lifetimes, according to the UK’s Met Office.