FORD SUED BY TRUCK OWNERS, ADDING IT TO DIESEL DEFENDANTS... 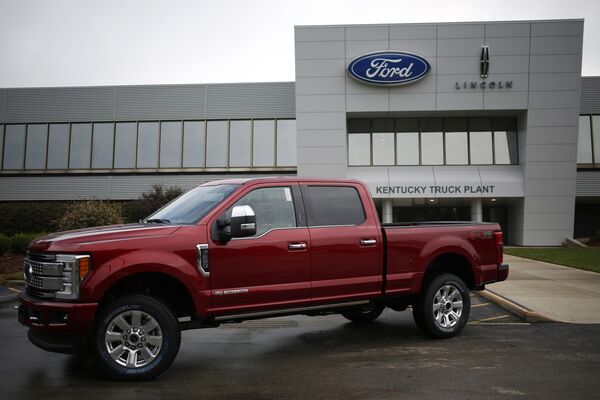 Ford Motor Co. rigged at least 500,000 heavy-duty trucks to beat emissions tests, drivers claimed in a lawsuit, adding to the tally of carmakers linked to diesel-cheating allegations worldwide that started in 2015 with Volkswagen AG...

Ford’s F-250 and F-350 Super Duty diesel pickups, a slice of the top-selling F-Series, are spewing emissions as much as 50 times the legal limit for nitrogen oxide pollutants, according to the complaint. The trucks sold from 2011 to 2017 cost $8,400 more than their gasoline-fueled counterparts, the filing shows.

“All Ford vehicles, including those with diesel engines, comply with all U.S. EPA and CARB emissions regulations,” Daniel Barbosa, a spokesman for Ford, said in an emailed statement. “Ford vehicles do not have defeat devices. We will defend ourselves against these baseless claims.”

Ford marketed the trucks as “the cleanest super diesel ever,” while the lawyer behind the suit said they should have been called “Super Dirty.”

“The vehicle’s own on-board diagnostic software indicates emission control system to be operating as Ford intended, even though its real world performance grossly exceeds the standard,” attorney Steve Berman, a managing partner at Hagens Berman, said in the complaint.

Ford worked with German automotive supplier Robert Bosch GmbH to mask the vehicles’ inefficiencies in order to maintain overall performance, according to the complaint filed Wednesday in Detroit federal court. Bosch is named as a defendant in the proposed class action.

“Bosch takes the allegations of manipulation of the diesel software very seriously,” Rene Ziegler, a spokesman for Bosch, said in an emailed statement. “Bosch is cooperating with the continuing investigations in various jurisdictions, and is defending its interests in the litigation. As a matter of policy, and due to the sensitive legal nature of these matters, Bosch will not comment further concerning matters under investigation and in litigation.”

Ford shares dropped as much as 1 percent to $12.96 in New York trading.

The company is at least the fifth carmaker accused of diesel cheating in the U.S., once again raising questions about the effectiveness of diesel technology. The dispute also casts a shadow on Ford’s “precious” F-Series, the top selling line of vehicles in the U.S. every year since 1981.

The lawsuit could pose a risk to Ford’s plans to introduce a diesel engine in its smaller F-150 pickup. The automaker has said it expects the powertrain will boost fuel economy to 30 miles per gallon on the highway. That would confer significant bragging rights for Ford and potentially help its trucks outperform new models from General Motors Co. and Fiat Chrysler Automobiles NV coming out this year.

Diesel engines, while more fuel efficient, produce greater volumes of nitrogen oxide pollutants, or NOx. During on-road testing the diesel trucks polluted at levels beyond legal limits and higher than their gasoline counterparts, according to the complaint.

Bosch is accused of developing software that enabled Ford to adjust fuel levels, exhaust gas re-circulation, air pressure and urea injection rates while being tested for emissions by regulators including the Environmental Protection Agency and California Air Resources Board.

The formula built by Ford and Bosch allowed the Super Duty trucks to reverse the traditional order of exhaust treatment, putting catalytic reduction before the diesel particle filter. This allowed Ford to market both fuel efficiency and power in its vehicles without compromise. The reordering should have forced Ford to burn off the collected particles, sapping the vehicles’ efficiency. Instead the particles were released through the vehicles’ exhaust, according to the complaint.

In 2011, Ford embarked on a marketing campaign that promised “class leading fuel economy and towing capacity” tested more rigorously than its competitors. The campaign evolved over the years, and as recently as 2017, Ford’s vehicle brochures boasted of reduced NOx levels “in the real world” and “unsurpassed diesel fuel economy.”

“It is not plausible, given this ‘groundbreaking’ testing, that Ford and Bosch did not know that emissions controls do not work when the vehicle is operating in normal stop-and-go conditions, running under heavier loads, and going up modest to steep grades,” said Berman, who has represented drivers against VW, Fiat Chrysler and GM.

To meet environmental standards, the Super Duty pickups will probably require modifications that could reduce power, torque and fuel efficiency, according to the complaint. The current software system violates the U.S. Clean Air Act, the drivers claim.

Based on the responses of automakers that have previously dealt with such claims, Ford has at least three possible paths.

VW admitted to malfeasance before consumers sued the company in September 2015. The German automaker ultimately agreed to pay $24.5 billion in penalties and make a coordinated effort to fix or remove more than 500,000 diesel-cheating vehicles.

Fiat Chrysler has promised a modification to rectify a mistake that’s afflicted 150,000 of its vehicles. The company, some drivers of its diesel trucks and regulators will meet in January to discuss a possible deal aimed at settling a class action. Fiat Chrysler Chief Executive Officer Sergio Marchionne has been adamant that the company wasn’t trying to deceive regulators or circumvent clean-air rules.

GM has flatly denied allegations of wrongdoing in lawsuits against the company.