FOREST FIRE CLIMATE REFUGEES? AS FIRES MOVE ON, WINE COUNTRY WONDERS WHETHER IMMIGRANTS WILL, TOO... 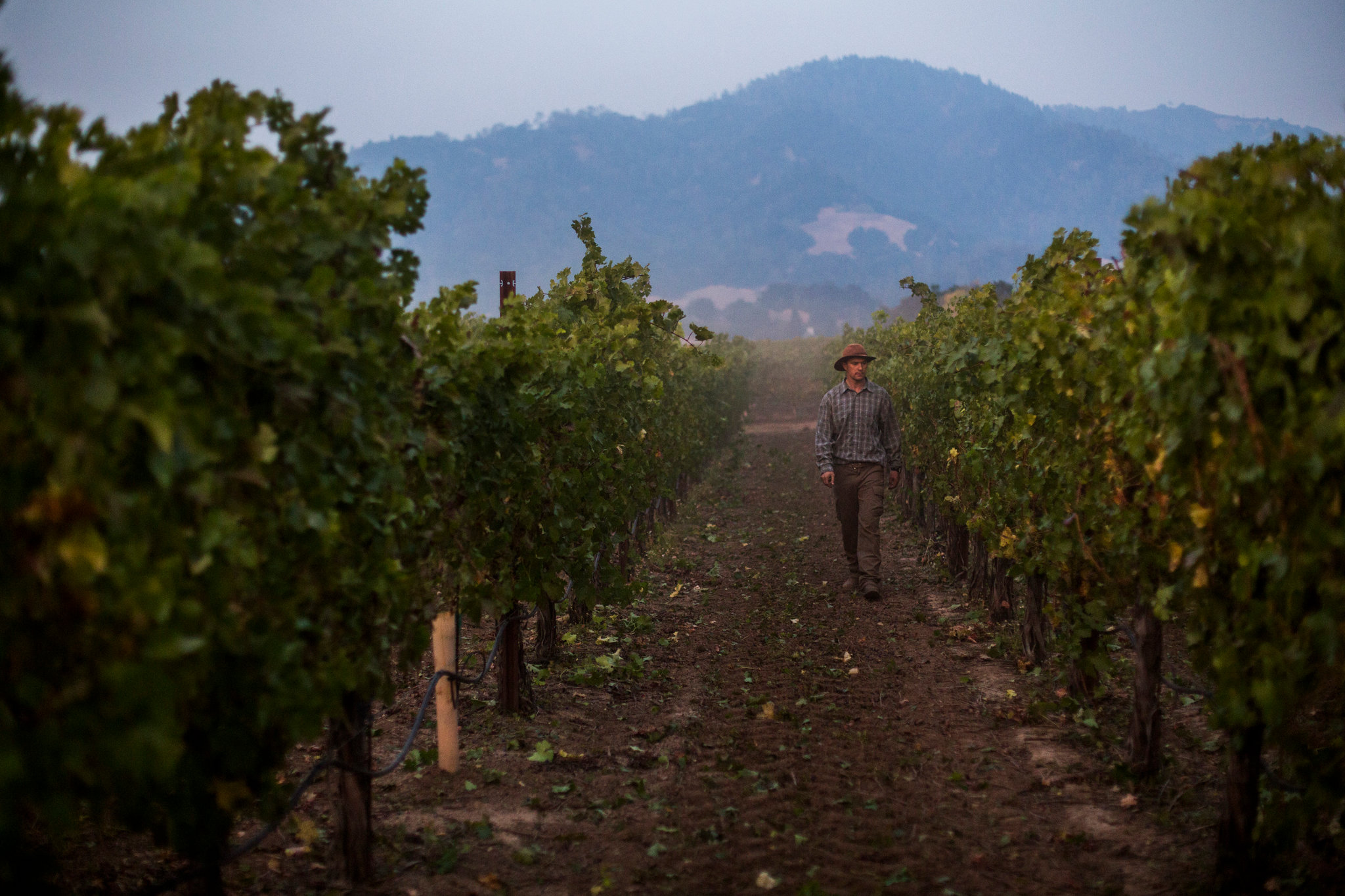 Cameron Mauritson, who supplies 60 wineries in Sonoma County, Calif., overseeing the harvest on Monday. Losing immigrant labor would be “catastrophic to our economy,” he said. Credit Bryan Meltz for The New York Times

Many of the foreign-born workers the region depends on are undocumented and do not qualify for most disaster aid. They may struggle to find affordable housing.

SEBASTOPOL, Calif. — The lush vineyards that dot the hillsides and valleys here largely survived the fires that leveled neighborhood after neighborhood to the east.

Crushed cabernet sauvignon, merlot and other grapes in tanks are now fermenting into wines that have earned California a prestigious place among global producers.

But the wine industry and the lodging, restaurant and construction sectors that help make this bucolic region a draw for millions of visitors each year are now bracing for a different crisis: the potential loss of many members of their immigrant work force.

Some 5,700 houses and structures have been destroyed and many more damaged by the blazes that barreled through Northern California last week. About 100,000 people were displaced, temporarily or permanently.

It is still too early to know how many of them were immigrants, who are in the most precarious position of any group. Because many of them are in the country illegally, they are ineligible for most disaster aid, raising concerns that those without places to live will move to other regions where housing is more plentiful and cheaper.

“To function, we have to be able to retain the immigrant workers in the area,” said Cameron Mauritson, who grows grapes on 350 acres in Sonoma County for 60 wineries. Losing them, he said, would be “catastrophic to our economy.” 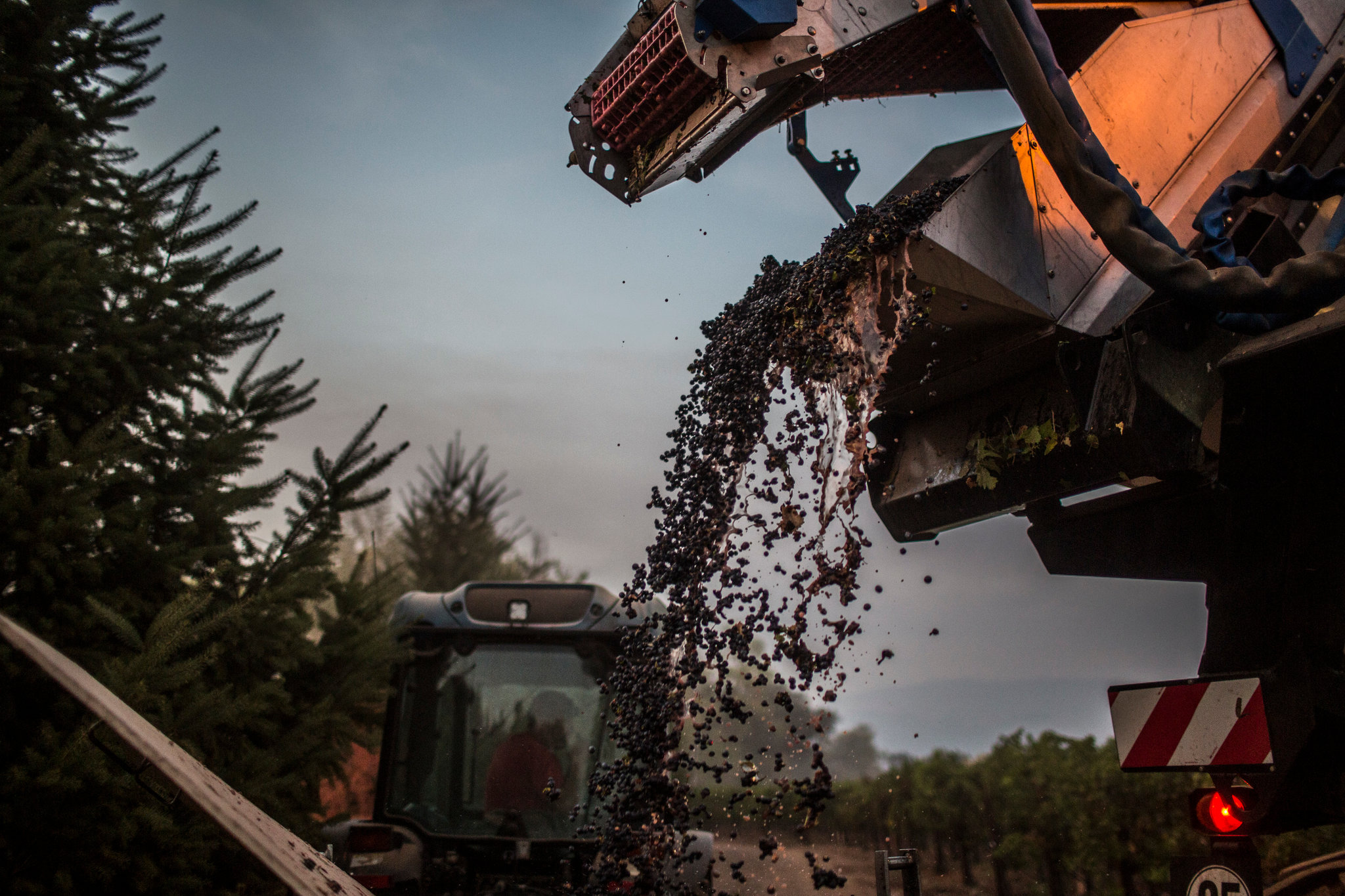 Cabernet grapes being harvested at Mauritson Vineyards. The wine industry draws millions of visitors to the area, fueling the lodging, restaurant and construction sectors. Credit Bryan Meltz for The New York Times

In absolute numbers, the population of immigrants in Los Angeles, Oakland and other California metropolitan areas dwarfs that of Sonoma County. But immigrants play a significant role here: nearly one-fifth of the residents in Santa Rosa’s metropolitan area are foreign-born, according to an analysis by Manuel Pastor, a professor at the University of Southern California who studies immigration. Latin American immigrants, mainly from Mexico, dominate the blue-collar work force.

Immigrant enclaves straddle Sebastopol Road, a thoroughfare in Santa Rosa lined with Latino-owned restaurants, supermarkets and gown shops catering to teenage girls celebrating their quinceañeras. Coffey Park, a Santa Rosa neighborhood that is home to many foreign-born residents, was devastated by blazes lit by flaming embers that flew across a six-lane highway.

Immigrants make up a majority of the 55,000 people employed by the wine industry and are also ubiquitous in the kitchens of farm-to-table restaurants and ritzy resorts that make the region a magnet for affluent tourists.

Sonoma County also has some of the highest rents in the country, at par with the San Francisco Bay Area. But pay here tends to be lower than in the city.

In San Francisco, housekeepers at unionized hotels earn about $23 an hour, compared with $11 to $13 an hour in Sonoma County, according to Unite Here, the union that represents room cleaners in those areas.

“It’s extremely expensive to live in Sonoma County, and rents keep going up,” said Wei-Ling Huber, president of Local 2850 of Unite Here. “The fire is only going to exacerbate the housing crisis.”

It is not uncommon for immigrants who earn $40,000 annually to pay $1,800 a month in rent in Santa Rosa, and anecdotal evidence suggests that prices have been rising since the fires swept through. 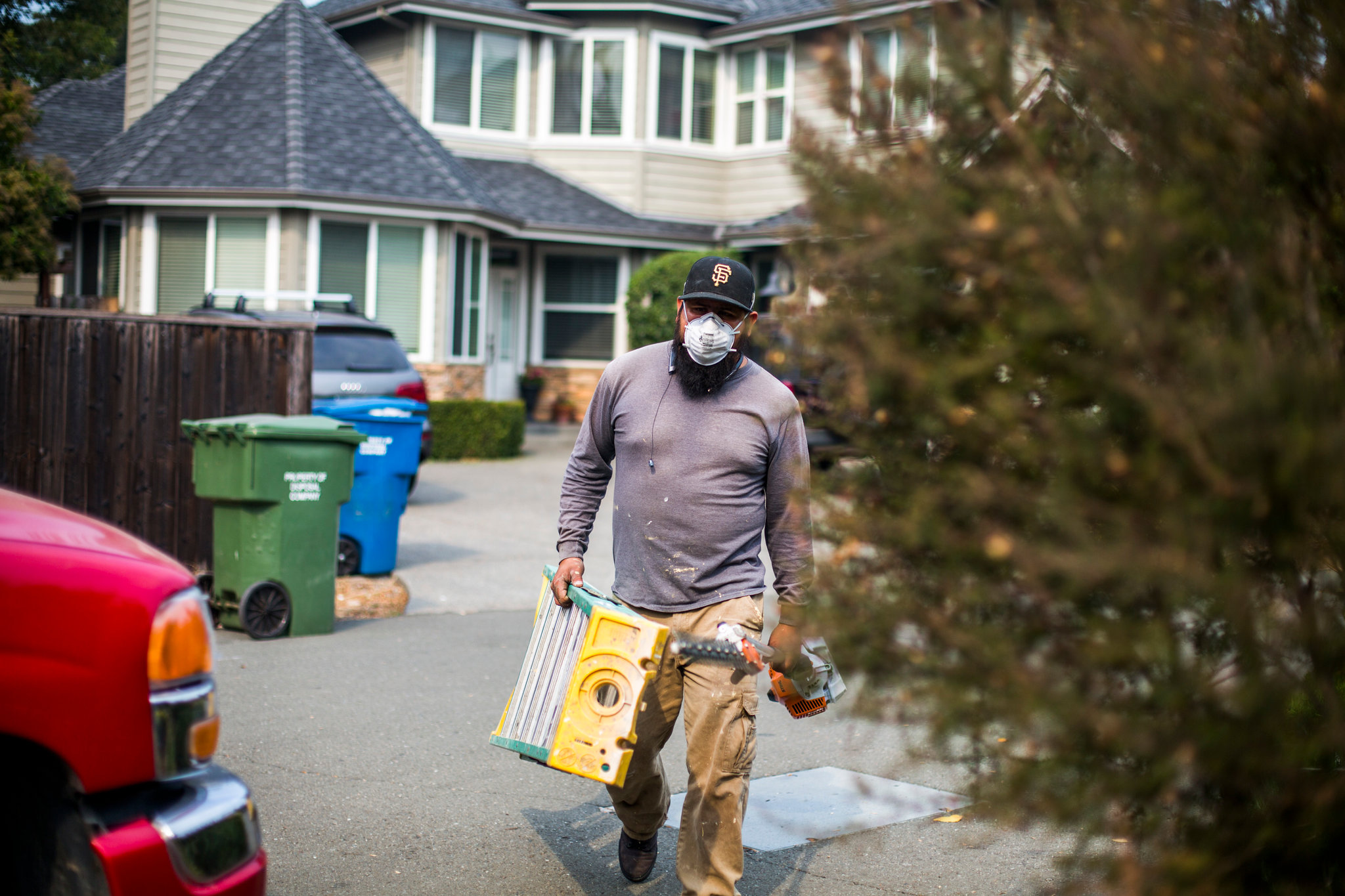 Manuel Correa tends gardens in Santa Rosa, but many of his clients lost their homes. Credit Bryan Meltz for The New York Times

Manuel Vieyra was paying $1,650 a month to rent a three-bedroom house. Having endured a traumatic escape as his house went up in flames last week, his family is now struggling to find a place they can afford.

“They’re asking $2,000, even $2,800 a month,” he said. “I don’t know what we’ll do.” The family, which lost everything, also needs money to replace their car, which his wife used to reach her housekeeping job, and his work truck.

Mr. Vieyra, 51, a father of three, works in high-end residential construction and has lived in Sonoma County since he crossed the border as a teenager to work in the vineyards of Sebastopol.

His family is staying at a friend’s small house, rather than in one of the shelters, out of concern that Mr. Vieyra and his wife, Fabiola, who are both undocumented Mexicans, could be arrested.

Spanish-language media and advocacy groups have publicized that federal immigration authorities will not be conducting enforcement actions in areas affected by the fires. Senator Kamala Harris, the California Democrat, tweeted over the weekend that she had “personally confirmed” that policy with the acting Homeland Security secretary, Elaine Duke.

But at a tidy, comfortable shelter at the Finley Community Center in Santa Rosa, there appeared to be no Latinos in sight on Sunday, not even in the semiprivate “family suites.”

Even those who did not lose their homes have had their lives upended.

For years, Manuel Correa has tended the gardens of 40 homes in an exclusive subdivision in Santa Rosa. At least 10 of the houses were destroyed, and another 25 were evacuated. Mr. Correa and his crew have not worked for a week. 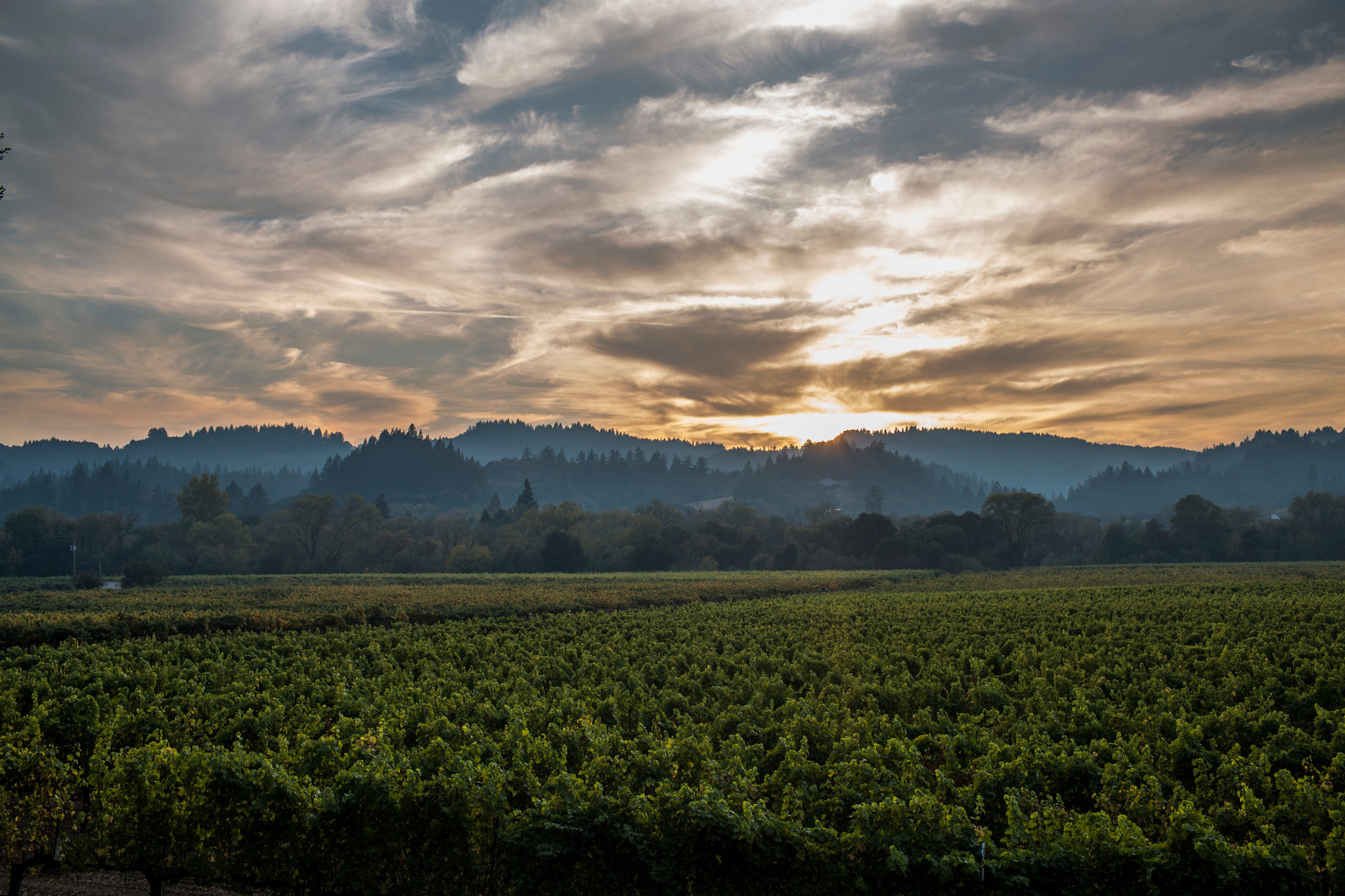 Vineyards around the Sonoma County town of Healdsburg. Even though the crops were mostly unscathed, the fires have put pressure on an already tight housing market. Credit Bryan Meltz for The New York Times

“I’m worried about how we’ll manage; there are so many bills,” said Mr. Correa, 29, who has two young children and another on the way. His monthly rent is $2,000.

No one expects a prolonged work shortage, as cleanup and reconstruction will create a demand for cheap labor, and the vineyards were largely untouched.

The question is whether the workers can find places to stay.

Along with not qualifying for assistance from the Federal Emergency Management Agency, undocumented immigrants also do not qualify for unemployment and welfare benefits.

A coalition of immigrant-service providers and advocates on Sunday started Undocufund, a fund-raising effort for undocumented families affected by the fires. By Tuesday afternoon, it had raised about $175,000. The Sonoma County Grape Growers Foundation started a fund on Tuesday to help farmworkers pay their rent, find housing and refurnish their dwellings, with an initial commitment of $50,000.

Duff Bevill, head of Bevill Vineyard Management, which harvests his vineyards and those of 30 other growers in Sonoma County, was already planning to build a dormitory to house 38 seasonal workers that he hopes to bring in from Mexico. He intends to use a visa program for farmworkers that requires employers to provide housing.

In the past, that rule and others have led many farmers to bypass the visa program and hire workers who overwhelmingly are undocumented. But more farms in the wine country could soon be forced to consider providing housing.

Mr. Bevill attended a meeting on Sunday with county supervisors, Hispanic community leaders, business representatives and farmers to discuss rebuilding Sonoma County. One of the biggest risks they identified was the loss of workers.

“The first thing that will start happening is, people who work in vineyards, hotels and restaurants will lose access to affordable housing and start leaving,” Mr. Bevill said. “At some point, workers are going to say they can’t find a place to live, and they’re going to leave.”