FORWARD ON CLIMATE NOT ONE STEP BACK... STOP TRUMP! 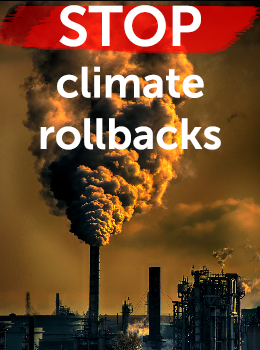 But you can stop them: Sign here and we'll deliver your comments to the EPA before their deadline on the 16th.

Sign Here: Forward on climate, not one step back on Clean Power Plan

It’s no secret that Trump and his EPA toady Scott Pruitt are climate deniers. They’ll do (and have done) anything to give more power to the coal, oil and gas industry in their relentless pursuit of a more polluted and unequal union.

But you can stop them: Sign here and we’ll deliver your comments to the EPA before their deadline on the 16th.

The CPP is far from perfect — giving way too many benefits to fracked gas and way too little emphasis to changing the power structure of how we generate electricity, among other flaws — but it DOES have the effect of incentivizing states not to burn coal. More importantly, it’s a step in the direction of climate action. And without this step the United States will have basically no chance of meeting its promise to cut emissions under the Paris climate agreement.

The EPA is taking comments on their reckless proposal until Jan. 16. And we’ve seen before that if we flood Trump with comments opposing a roll-back, he often backs down or can be forced to reconsider — it’s happened on health care, on immigration, the Iran nuclear deal, and even (this week) on offshore drilling in Florida.

It’s also essential that we have a strong record of comments opposing the roll-back so that our friends in the legal system can mount the best possible case to stop Pruitt. The whole Clean Power Plan is a response to a Supreme Court decision that Carbon pollution and climate change are real, and that the EPA has a duty and requirement to address this pollution under the Clean Air Act. No matter what Pruitt and Trump think, if enough of us submit comments before the deadline, there’s a good chance we can defeat them in court, and in the court of public opinion.

Sign here and we’ll deliver all the comments via the EPA’s official (and onerous) comment process by the deadline on the 16th.