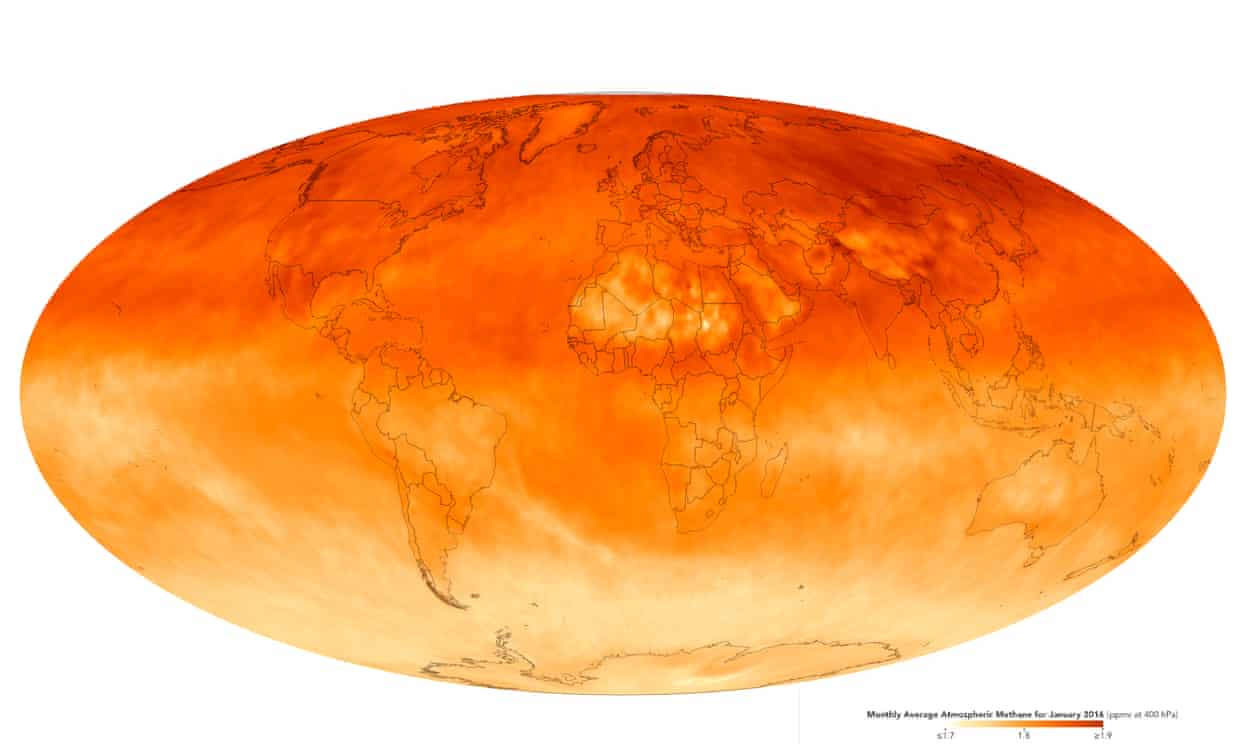 Map showing global methane concentrations in January 2016 at a pressure of 400 hectopascals, or roughly 6km above the surface. Concentrations are higher in the northern hemisphere because both natural- and human-caused sources of methane are more abundant there. Photograph: AIRS/Aqua/Nasa

Emissions of the powerful greenhouse gas from coal, oil and gas are up to 60% greater than previously estimated, meaning current climate prediction models should be revised, research shows...

The fossil fuel industry’s emissions of a powerful greenhouse gas are dramatically higher than previously thought.

Researchers who pulled together the biggest database yet of worldwide methane emissions found that, after natural sources were discounted, emissions from gas, oil and coal production were 20-60% greater than existing estimates.

Methane makes up just 16% of global greenhouse gases and is shorter-lived than the CO2 which accounts for three quarters, but has a much more powerful warming effect.

The extra methane estimated by the study is 300 times larger than the amount leaked in California’s Aliso Canyon last year, which was the worst gas leak in US history. While bad news for efforts to tackle climate change, the new study published in Nature also found that methane emissions had fallen as a fraction of industry’s production.

Lead author Stefan Schwietzke, of the University of Colorado and US science agency Noaa, said that methane from fossil fuels had played a significant role in global warming, but the gas’s short lifetime meant acting on it now could pay quick dividends.

Experts said the study meant scientists should reconsider their climate models. “Emissions scenarios currently used for climate prediction need to be reassessed taking into account revised values for anthropogenic methane emissions,” wrote Dr Grant Allen of the University of Manchester in a commentary in Nature.

Other studies have suggested the huge growth in the US shale gas industry is to blame for a spike in methane emissions since the mid-noughties. But the new work found methane emissions from natural gas production had declined as a fraction of production from 8% in the mid-1980s to around 2% in the late 2000s and early 2010s.

Methane emissions have been rising since the industrial revolution but paused between 1996 and 2006 – believed by some to be because of decreased fossil fuel emissions in former Soviet Union countries – before marching upwards again. Most is from natural sources, such as wetlands and geological seepage, but humanity’s share is estimated to account for 30-45% of the total.

The study published on Wednesday examined the isotopic “fingerprints” of methane sources, compiling thousands of measurements from public sources and peer-reviewed papers. Allen said it was the largest database of its kind.

Schwietzke said that such models on methane were very sensitive to the data that informed them. “A key message is that the number and comprehensiveness of measurements matter.”