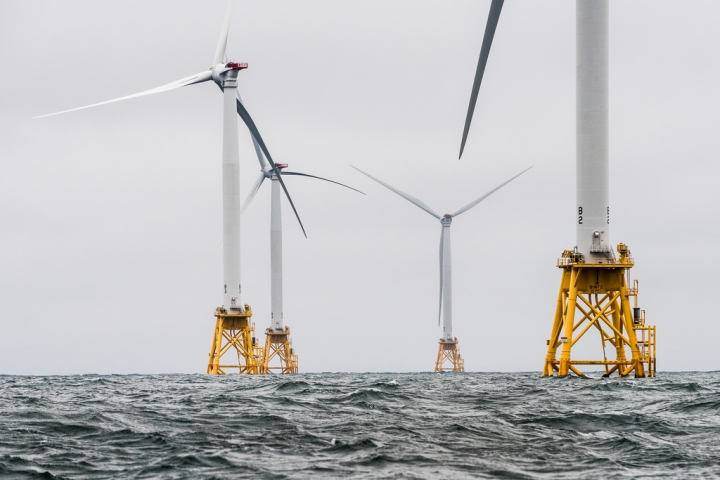 The U.S. may be on the cusp of a stark turning point in energy and climate policy with the election of Donald Trump, who has stocked his cabinet with a majority of people who doubt or reject established climate science...

Top priorities of the Trump transition team and cabinet nominees — many who disregard the connection between global warming and fossil fuel energy use — include rolling back eight years of Obama administration climate regulations and restrictions on coal, oil and gas development.

Trump’s energy plan reads like a wish list from the fossil fuel industry: it envisions unfettered oil, gas and coal development as a path to national prosperity and energy independence. Gone are Obama-era overtures to address climate change by modernizing fossil fuel use and development, and embracing ambitious renewable energy goals.

Though it’s unclear how far Trump can go to implement his vision for a deregulated fossil fuel industry during his first year in office, here are four developments in energy policy to keep an eye on in 2017:

The Fall of the Coal Leasing Moratorium

When an energy company wants to drill for oil, mine for coal or frack for natural gas on federal public lands, it has to bid for the right to lease those minerals, and then obtain permits to set up its operations there after an environmental review is conducted and other regulations are met.

Though he hasn’t provided many specifics, Trump has publicly said he is eager to streamline the process and make it as easy as possible for energy companies to extract fossil fuels from public lands, which are the source of about 24 percent of America’s fossil fuels, including about 40 percent of all the coal produced in the U.S.

One of the restrictions that could fall early in Trump’s presidency is the moratorium the Obama administration placed on coal leasing in early 2016. The moratorium is part of the Interior Department’s three-year study of the impact of the coal leasing program on climate change.

Trump’s energy plan calls for an end to the moratorium as one of the ways he will reignite the declining coal industry. He’ll have plenty of support: Interior Secretary nominee Ryan Zinke, who would oversee the federal coal leasing program, has a long history of support for coal mining on public lands.

But it’s unclear what effect any revocation of the moratorium would have on the coal industry itself.

The industry has faltered because of declining global demand and low natural gas prices, which have encouraged electric power companies to use gas instead of coal to generate electricity, said Ray Rasker, executive director of Headwaters Economics, an independent research group focusing on the economic implications of land management decisions in the West.

“Energy development is driven by price, technology (e.g. fracking) and geology,” he said, adding that regulatory restrictions have had little effect on the coal market. 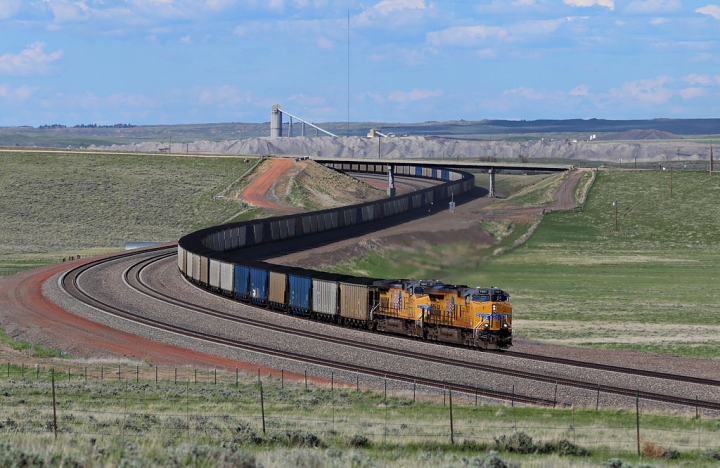 A freight train hauling coal away from a Wyoming coal mine. Credit: Jerry Huddleston/flickr

No Obama climate regulation has drawn Trump’s ire more than the Clean Power Plan, which would limit carbon emissions from existing coal-fired power plants as a way to reduce U.S. greenhouse gas emissions. The plan was a lynchpin of the passage of the Paris Climate Agreement because it gave the U.S. international credibility by proving that America was serious about slashing greenhouse gas emissions to prevent global warming from exceeding 2°C (3.6°F).

Trump, who has vowed to pull the U.S. out of the Paris pact, has installed vehement climate denialist Myron Ebell as leader of the U.S. Environmental Protection Agency’s transition team and nominated fellow denialist and strident EPA foe Oklahoma Attorney General Scott Pruitt to lead the agency. Pruitt filed suit against the EPA to kill the Clean Power Plan, which is currently tied up in court and barred from taking effect until the Supreme Court makes a final ruling.

The 24 states suing to stop the Clean Power Plan, including Oklahoma, have asked Trump and the incoming Republican-controlled to undo it even before a court ruling, which is expected sometime in 2017.

If Congress is unsuccessful in killing the Clean Power Plan, the Trump administration could refuse to defend it in court, decline to enforce it, or the administration could begin the long bureaucratic process of undoing the plan, which took more than a year and a half to create.

But the Clean Air Act, which the Obama administration used as the legal mechanism for the plan, mandates that the federal government regulate carbon dioxide emissions because the EPA has already declared it to be a pollutant, said David Goldston, government affairs director for the Natural Resources Defense Council.

“The Clean Air Act mandates you have to take action,” he said  “The moral of that story is we would expect president-elect Trump to move against current climate policy but not make a lot of tangible headway immediately.”

The incoming administration will have full control over leasing of renewable energy on federal lands and waters, including vast tracts of public lands across the West and the open waters off the East and West coasts. Actions the administration will take in its early months in office will determine how renewables will develop in those areas in the coming years.

Trump, who has openly criticized renewable power, has assailed wind farms as being “bird killers,” and has tried to stop an offshore wind farm proposed for construction within view of his Scotland golf course.

Beyond opposing the wind farm in Scotland, Trump has said little about how his administration might change the government’s strategy on wind and solar development on public lands and waters. Interior Secretary nominee Zinke has said that America’s energy strategy should include developing wind and solar as well as fossil fuels. Former Texas governor and Energy secretary nominee Rick Perry strongly supports oil and gas development, but presided over Texas as it became the nation’s wind power leader.

“In the end, for the political class it's all about money and votes,” said Mark Barteau, director of the Energy Institute at the University of Michigan-Ann Arbor. “Coal is dying and renewables are surging, and that is not going to change. Once this bunch figures out where the dollars and jobs are, they will follow.”

One of the tests of the new administration’s support for renewables will be whether Trump gets behind tax credits that help spur wind and solar development both on land and offshore, said Jeremy Firestone, director of the Center for Carbon-Free Power Integration at the University of Delaware.

“I don’t think we can necessarily draw the conclusion that Trump himself is opposed to offshore wind,” Firestone said. “The Aberdeen Bay Wind project in Scotland that he opposed is to be only 3 km (1.8 miles) from shore and thus not replicated in the U.S.”

Offshore wind farms proposed for the U.S. range from 4 to more than 20 miles off the nearest coastline, placing many of them out of view of the shore. 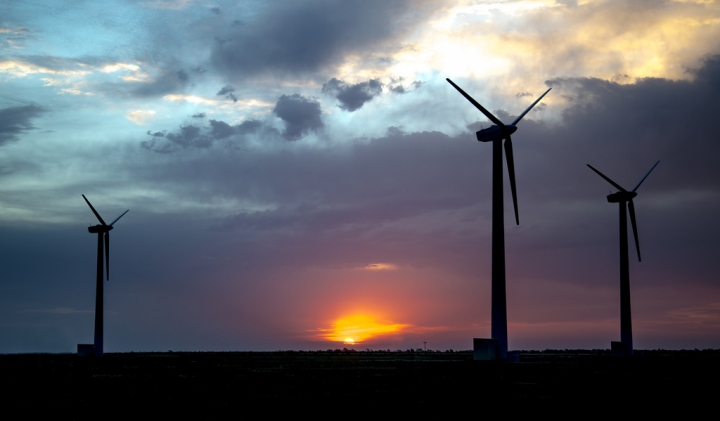 If the Trump administration and Congress attempt to gut U.S. energy and climate policies, states are likely to emerge in 2017 as the nation’s bulwark against climate change.

Carbon-cutting options under the Trump administration will be limited, and states are likely to be left to devise their own plans for energy efficiency and renewable energy standards with little encouragement from Washington, D.C. in 2017.

Even fossil fuel-dependent Texas will play a major role as its largest-in-the-nation wind power industry continues booming and setting records, just as it did on Nov. 27 when the state’s wind turbines served more than 3 million homes — providing 45 percent of the state’s electricity. Wind turbines provided about 11.7 percent of the electricity to the Texas power grid in 2015.

The Clean Power Plan was one of the main federal policies encouraging states to develop renewable energy instead of relying mainly on coal-fired power plants.

Danny Cullenward, an energy economist and lawyer at the Carnegie Institution for Science, said that although it is unlikely that the loss of the Clean Power Plan would affect many states’ emissions cutting goals, there will be little encouragement for states reluctant to take action on climate change to create emissions goals without the plan in place.

“The massive transformations underway in the U.S. electricity sector will likely continue, but they won't be driven by federal climate policy,” depending instead on state policy and technical innovation, he said. “And they won’t put the U.S. on track for Paris compliance.”

You May Also Like:
The U.S. Has Been Overwhelmingly Hot This Year
Google Plans to Be 100 Percent Renewable Next Year
Record-Warm Autumn Solidifies 2nd-Hottest Year for U.S.
Every State Had a Top 10 Hottest Year