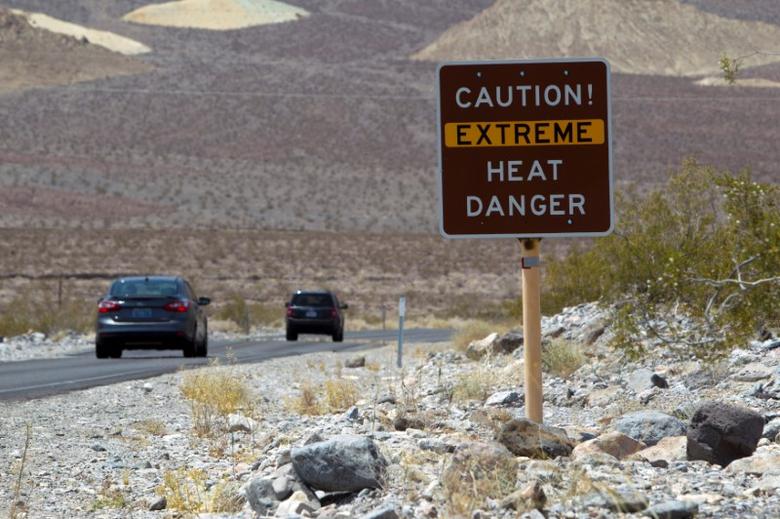 Four people, including a homeless person and two hikers, have died from the record-breaking heat in the U.S. Southwest, media reports said, where triple-digit temperatures have driven residents indoors and canceled airline flights...

The victims were identified only as a 72-year-old man and an 87-year-old woman.

"It is tragic when someone dies of hyperthermia since in most every case it could have been prevented," Dr. Michelle Jorden of the Santa Clara County Coroner’s Office told the newspaper.

"Hyperthermia and heat stress happen when a body's heat-regulation system cannot handle the heat. It can happen to anyone, which is why it is so important to be in a cool location, drink plenty of water and take a cool bath or shower if you are getting too hot," Jorden said.

The extreme heat, brought on by a high-pressure system parked over the Four Corners region where Colorado, Utah, New Mexico, and Arizona meet, has boosted temperatures well above normal across much of the Southwest.

The bodies of a 57-year-old father and his 21-year-old son from Corpus Christi, Texas, were found earlier this week in the Carlsbad Caverns National Park in New Mexico, where they were hiking, media reported.

New Mexico State Police told an NBC affiliate in New Mexico that the scorching temperatures, which were over 100 degrees Fahrenheit (37.8 degrees Celsius), contributed to the deaths of the men.

The National Weather Service and local authorities issued heat advisories and warnings, urging residents to stay indoors and to drink plenty of water if they were outdoors. Power grid operators encouraged customers to use electricity sparingly to avoid a shutdown or blackout.

The heat can also create issues for ground crews, where pavement temperatures can reach more than 150 degrees F (66 C), a life-threatening condition if workers are exposed to it too long.

Temperatures reached 127 F (52.8 C) in California's Death Valley at the peak of the heat wave on Tuesday afternoon but cooler weather was expected across the region by the end of the week.