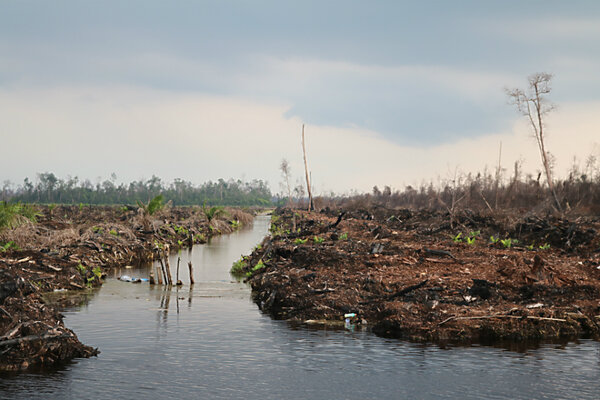 Once-lush peatland near Pekanbaru, Indonesia, that went up in flames in 2015. Deforestation is among the top global challenges to the environment and sustainable development. Michael Holtz /The Christian Science Monitor/File

A global conference in Nairobi this week put a focus on environmental risks in city streets, farms, and beyond. The challenges to human well-being are big, but some steps already under way point toward solutions.


Washington — For millions of people across the planet, environmental degradation is a daily reality that’s also a serious threat.

Air pollution causes the premature death of around 7 million people each year, the World Health Organization estimates. The number goes much higher when other environment-linked challenges, from chemicals exposure to poor sanitation, are factored in. A new UN report released this week, documents the problem.

With this in mind, representatives of more than 170 countries gathered this week in Nairobi, Kenya, for the second United Nations Environment Assembly, nicknamed the “Parliament for the Environment”. The event, organized by the UN Environmental Program (UNEP), is meant to expand global efforts to solve some of the world’s worst environment-related problems. The event brought together heads of state with other officials and environmental players from civil society.

The meeting in fact, is just one sign of how momentum is building across the globe to solve some of these pressing problems.

Human well-being has always been intertwined with the environment and sustainable development. But people haven’t always been aware of how environmental damage and pollution impact populations. A top priority, experts say, is to change deeply entrenched bad habits.

"The decisions you will take are critical for the well-being of this and future generations," United Nations Deputy Secretary-General Jan Eliasson told the assembly in Nairobi on Thursday. "They will have profound and lasting consequences."

For example, of the 7 million people who die from air pollution each year, about 4 million die from breathing in smoke from cooking fires lit in their homes, the UN report estimates. Meanwhile, in sub-Saharan Africa, deforestation caused by unregulated agricultural practices and illegal logging leads to an uptick in desertification-linked water problems, poor air quality, and nutritional or other diseases.

Here’s a look at some of the efforts under way to stem the risks.

The UN estimates that around 20 percent of global greenhouse gas emissions are caused by deforestation from agricultural expansion and destructive logging practices, among other factors. In response, the international community is working to help strengthen rule of law and crack down on the nefarious practices that lead to deforestation in countries around the world.

“Good governance, less corruption, and general rule of law in the forest sector really helps to ensure everything produced is both sustainable and legal according to the country’s legal framework,” says Naomi Basik Treanor, manager of the forest law and governance program at Forest Trends, a nonprofit that works to conserve forests and other natural ecosystems.

“So we work with countries that produce a lot of timber and palm oil and other commodities that put forests at risk,” Ms. Treanor says.

A lot of this work consists of putting legal frameworks in place and ensuring that they are enforced, Treanor says. Some of the world’s largest timber importers, such as the United States and Australia, have recently passed laws that prohibit the import of wood that was illegally harvested in the country of origin.

The European Union, meanwhile, is working with timber-exporting countries on bilateral agreements to ensure that timber exported to the EU is produced sustainably and legally. Once a country has signed an agreement with the EU, it has unfettered access to European markets. There are currently between 15 and 20 countries finalizing agreements with the European Union under the program known as Forest Law Enforcement, Governance and Trade, or EUFLEGT. Evaluations of the program concluded that it led to improved forest governance in all of the target countries.

“Forests and the environment are very well represented in the Sustainable Development Goals, the Paris climate agreement, and in EU efforts,” says Treanor. “And those three things are pretty big.”

The Sustainable Development Goals, which were announced in September at the UN headquarters in New York, include the aim to “promote the implementation of sustainable management of all types of forests, halt deforestation, restore degraded forests, and substantially increase reforestation globally” by 2020.

Meanwhile, the Paris climate agreement, which was signed by over 170 countries in April, includes a plan to reduce greenhouse gas emissions caused by deforestation by providing countries with economic incentives to crack down on activities that lead to deforestation.

During the UN assembly in Nairobi, another major topic of discussion was how to detoxify the environment and decarbonize the economy. Black carbon, a light-absorbing matter that medical experts link to human morbidity, is prevalent in developing regions where many people use wood or other biomasses for cooking.

Black carbon is estimated to contribute between 25 and 50 percent of the world’s planet-warming greenhouse gas emissions, according to the Global Alliance for Clean Cookstoves, an UN-affiliated alliance of experts working to foster clean cooking solutions. About 25 percent of that comes from fuels burned in residences. In South Asia, for example, more than half of the black carbon in the atmosphere is estimated to come from inefficient stoves.

In this case as well, nonprofits and multilateral organizations are getting involved.

“It’s a huge priority right now among international organizations. Right now the African Development Bank’s annual meeting is taking place and they are talking about this issue, UNEP is talking about it, we heard about it at the World Humanitarian Summit,” says Kip Patrick, director of global communications at the Global Alliance for Clean Cookstoves.

“So we’re seeing a prioritization of this issue like we haven’t seen before. We’re finally seeing a momentum shift.”

Still, the scale of the problem is immense and the issue hasn’t traditionally received as much funding as comparable development issues, Mr. Patrick says.

In order for these efforts to be successful, it’s not just state actors and nonprofits that need to participate. That’s why the weeklong assembly in Nairobi included a three-day sustainable innovation symposium to engage the private sector. The hope is that these events will attract investment to technologies, like clean-burning cookstoves, that could help developing countries boost their economies without harming the environment or human health.

“For an issue this big, it’s going to need a mix of players, and that’s what we’re seeing now,” says Patrick. “We feel there is an actual market being developed that is more sustainable, and that will encourage both adoption from consumers and quality products from the manufacturers, all of which will lead to further investment.”

The event in Nairobi was the first major UN meeting following the announcement of the United Nation’s Sustainable Development Goals and the signing of the Paris climate accords, both of which brought climate change and the need to mitigate environmental damage into sharp relief.

“The environment has shifted from the margins of attention to the center of global decision making,” Achim Steiner, UNEP director, announced during the assembly’s opening session on Monday.

Now the world will be watching to see how the resolutions pouring out of this week’s assembly fare in bolstering human and environmental well-being across the globe.