GLOBAL WARMING MAY HAVE LED TO THE DEATH OF THIS POLAR BEAR, RESEARCHER SAYS...

Rapid sea ice loss is depriving polar bears of their habitat, since they depend on the ice to hunt prey...

9:10 a.m. ET: This story was updated to indicate that Micklen's photo was taken in 2014, not 2015. As Ian Stirling told Mashable, 2015 was also a year that featured extensive sea ice loss in parts of the Svalbard archipelago.

National Geographic photographer Paul Nicklen captured a photo of an emaciated, deceased polar bear last summer while traveling around Svalbard, Norway, which he posted in recent days. This photograph, along with another photo of an exceptionally skinny polar bear that went viral in late August, would seem to speak to the dangers that global warming poses to the iconic species.

Rapid sea ice loss is depriving polar bears of their habitat, since they depend on the ice to hunt prey. Ice loss has been particularly noteworthy in recent years in northwestern Svalbard, says Ian Stirling, an adjunct professor at the University of Alberta who has studied polar bears for four decades. Stirling works as an ecotourism guide in Svalbard and has seen the sharp decline in summer ice cover, as well as an increase in sightings of skinny bears coming onshore.

Nicklen's photo, Stirling says, shows a bear that most likely, but not certainly, died as a result of starvation related to sea ice melt. “You can’t say 100% that it starved to death, but that’s probably what happened,” he said.

"It certainly looks to me like it has starved to death,” Stirling added. He said the absence of biological tests to determine if the bear suffered from a disease that could have been fatal is a source of uncertainty in this case. 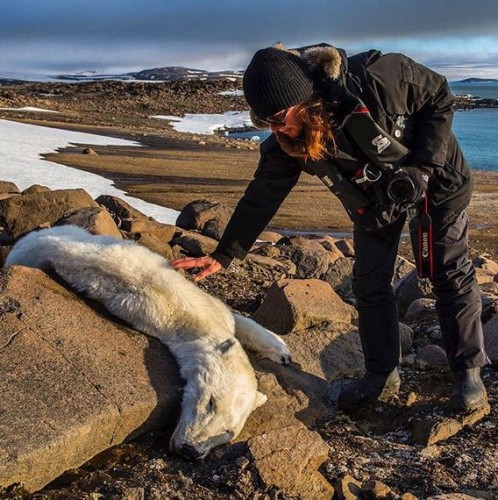 48.9k likes
5,211 comments
Last summer I traveled with a group of friends to Svalbard, Norway in search of polar bears. We went to my favorite spot where I have always been able to find bears roaming around on sea ice throughout the summer. On this occasion, however, we didn't find any sea ice and we never found any bears alive. We did find two dead bears in this location and other groups found more dead bears. These bears were so skinny, they appeared to have died of starvation, as in the absence of sea ice, they were not able to hunt seals. In all of my years of growing up in the Arctic and later, working as a biologist, I had never found a dead polar bear. It is now becoming much more common. Through @sea_legacy and @natgeo we will continue to shine a light on our changing planet to convince the unconvinced. Please follow me on @paulnicklen to learn more about the effects of climate change. #polarbear #nature #wildlife #arctic #seaice @thephotosociety

As for Nicklen, Stirling said he's one of the world's most widely known polar photographers, one who is not interested in having an image go viral on social media without appropriate context.

“You’re dealing with a responsible photographer in my personal estimation,” Stirling said.

In his post accompanying the photo on Instagram, Nicklen wrote that this was just one of several dead bears he observed in that location in 2014.

"We did find two dead bears in this location and other groups found more dead bears. These bears were so skinny, they appeared to have died of starvation, as in the absence of sea ice, they were not able to hunt seals. In all of my years of growing up in the Arctic and later, working as a biologist, I had never found a dead polar bear. It is now becoming much more common," he wrote.

About that other skinny polar bear photo, though...

However, the image that made the rounds in late August, which was also taken in Svalbard, provides a cautionary tale against jumping to conclusions about polar bear deaths. The photo, which was taken by wildlife photographer Kerstin Langenberger and posted on Facebook, shows a living but skinny bear walking on a small chunk of ice. This bear's weakened condition was not likely the result of climate change, Stirling said.

In an interview with Mashable, Stirling said despite media headlines pointing to the contrary, the bear in the August photo was most likely an older, sick or injured bear, and was not likely suffering from a lack of ice cover and available prey.

"You have to be a little bit careful about drawing conclusions immediately," Stirling said. “[The bear] may be starving, but it may just be old,” he says, adding: "A difficulty hunting could be involved.” Stirling noted that the bear appears to have an injury to one of its hind legs, which could have played a role in its weight loss.

“I don’t think you can tie that one to starvation because of lack of sea ice.”

In a note accompanying the photo on Facebook, Langenberger, the photographer, questioned whether climate change is harming the polar bears that draw tourists to Svalbard each year.

"I am a critically minded person, and I observe," she wrote.

"I see the summers being so pleasant (and warm) as never before. I see the glaciers calving, retreating dozens to hundreds of metres every year. I see the pack ice disappearing in record speed. Yes, I have seen bears in good shape - but I have also seen dead and starving polar bears. Bears walking on the shores, looking for food, bears trying to hunt reindeer, eating bird's eggs, moss and seaweed."

Polar bears residing in the U.S. Arctic are listed as a threatened species under the Endangered Species Act, and the IUCN Red List designates polar bears throughout the Arctic as "vulnerable" because of sea ice loss trends and predictions of a nearly ice-free Arctic Ocean by the middle of this century.