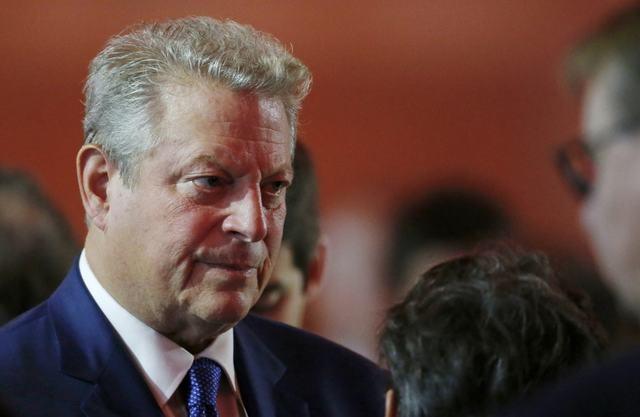 Gore, a climate activist who will lead a 24-hour televised marathon on Dec. 5-6 about global efforts to limit rising temperatures, told Reuters that companies and U.S. states would cut emissions despite Trump's doubts that warming is man-made.

"Business alone, along with states, will almost guarantee that we meet the reduction targets (set by U.S. President Barack Obama) regardless of the policies the new president ends up adopting," Gore said in a phone interview.

Obama wants to cut greenhouse gas emissions by between 26 and 28 percent from 2005 levels by 2025, a goal opposed by Trump who wants to promote jobs and bolster national security by exploiting more U.S. coal, oil and natural gas.

Gore said companies were finding that both customers and employees, especially the young, wanted greener, less polluting products. And prices of electricity from solar or wind power were falling below the cost of coal-fired power in many nations.

A Democrat, Gore also said it was premature to assume that Republican Trump would carry out campaign pledges to ditch the 2015 Paris Agreement signed by almost 200 nations, which aims to end the fossil fuel era by shifting to renewables in the second half of the century.

"It's too early to write off the prospects of the new administration surprising people like me on the upside," said Gore, a 2007 Nobel Peace Prize laureate for his work to highlight the risks of global warming.

During the campaign, Gore once said Trump's policies would "take us toward a climate catastrophe."

Trump has dismissed the idea of man-made climate change as a hoax but told the New York Times on Nov. 22 that he had an "open mind" on the Paris Agreement, softening past opposition.

After Trump won, Gore offered on Nov. 9 to "do everything I can to work with him (Trump) and his administration." He declined comment when asked if Trump's transition team had been in touch.

Gore said it was hard to keep all campaign promises upon assuming what he called the "awesome responsibilities" of government, citing his own experiences from 1993-2001 with former president Bill Clinton.

Gore's Climate Reality Project will run a 24-hour broadcast from Monday at 2300 GMT, televised in 75 nations and available globally online, about actions to slow climate change in major emitters led by China, the United States, India and Russia.

Backers of the Paris Agreement taking part will include the U.N.'s climate chief Patricia Espinosa, Gina McCarthy, who is the head of the U.S. Environmental Protection, and California governor Jerry Brown.

After Trump's victory, almost 200 nations meeting in Morocco reaffirmed backing for the Paris Agreement, saying there was a "urgent duty" to act to avert heat waves, extinctions of animals and plants, floods, droughts and rising sea levels.